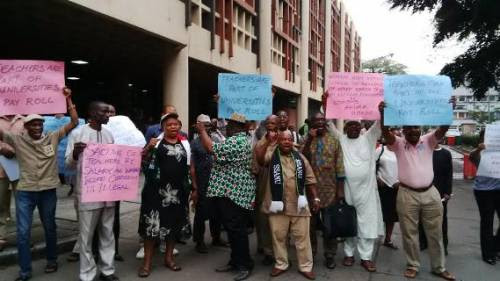 File photo of SSANU members during a protest

The unions said the suspension would be for two months to observe the implementation of the contents of the agreements reached with the government.

The Senior Staff Association of Nigerian Universities (SSANU) and the Non-Academic Staff Union of Educational and other Associated Institutions on Saturday announced the suspension of its more than five-month-old strike.

The unions said the suspension would be for two months to observe the implementation of the contents of the agreements reached with the government.

The Minister of Education, Adamu Adamu, had hinted that his ministry had reached an agreement with three of the four striking unions in tertiary institutions to suspend their strike.

The Academic Staff Union of Universities (ASUU) is the only union that has rejected the minister’s plea, insisting that the government must pay ASUU members’ withheld salaries for the past six month.

Industrial action by ASUU, NASU and SSANU have led to the disruption of activities in Nigeria’s public universities for the past 185 days.

Both SSANU and NASU downed tools in March, a month after ASUU declared its strike.

In a telephone interview with our reporter on Saturday, Mr Salaam said the unions decided to suspend the strike for two months to give room for the conclusion of negotiations with the government.

Mr Salaam is a member of the Joint Action Committee (JAC) set up by both SSANU and NASU to jointly address issues of disagreement with the government.

He said the union has reached certain agreements with the government on some of its demands.

According to him, the government has agreed to adhere to the guidelines of collective bargaining throughout the process of negotiation.

The government, he said, has also agreed to pay N50 billion earned allowances for members of the unions.

He added that the government has agreed to fast-track the process of deciding on the payment platform developed by the unions- University Peculiar Payroll Payment (U3PS).

The U3PS, tested alongside IPPIS and UTAS also did better than the IPPIS, said Minister of Education, Adamu Adamu, on Thursday.

Mr Salam said: “What we expect them to do in the next two months is to release the result and determine a way forward for us to be able to rest this issue of the payment platform.

“The process should be fast-tracked within two months. We are only giving them a two months window. It is not an open ended suspension.”

PREMIUM TIMES had reported the demands of both unions to include the renegotiation of the 2009 agreement, payment of earned allowances, usurpation of non-academic career positions by vice-chancellors, inclusion of university staff school into the university community, non-payment of minimum wage arrears, and funding of state universities.

Mr Salam said university vice-chancellors have continued to defy a court order declaring that the teachers of universities’ staff schools are integral members of the university community.

He added that the government has only paid less than N8 billion of the N30 billion it agreed to pay.

“The memorandum of understanding we had was that the renegotiation will be concluded within six weeks. And that was as far back as February 2021. And if you count six weeks from that time we will be talking about sometime in May or maybe April. But here we are, a year later, we have not even been invited for one meeting despite our reminders.” he had said in an interview with PREMIUM TIMES.