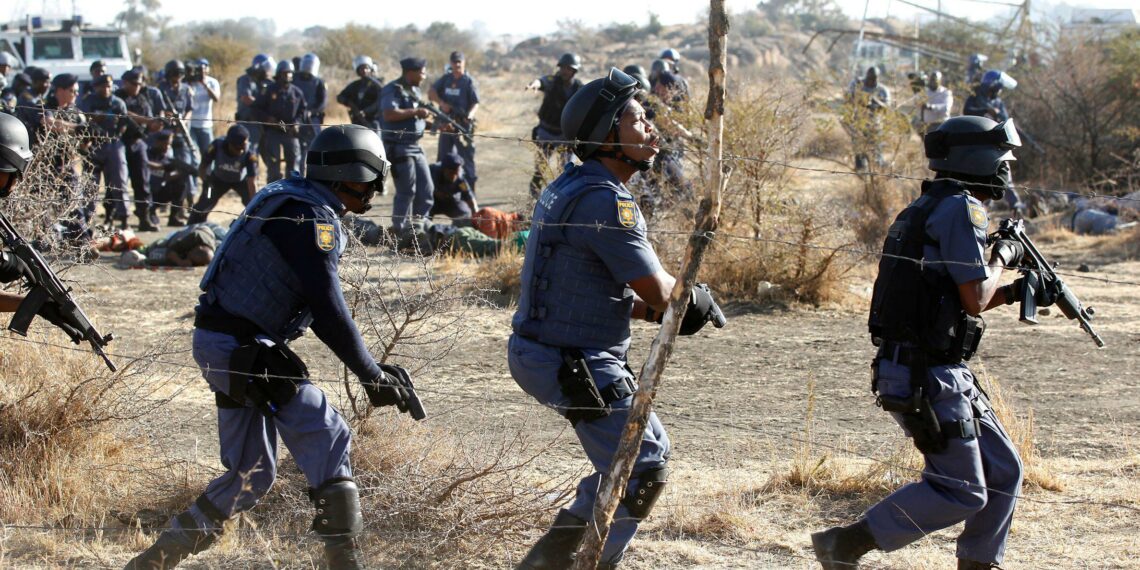 Police officers react after firing shots at protesting miners outside a South African mine in Rustenburg, 100 km (62 miles) northwest of Johannesburg, August 16, 2012.

They knew bloodshed was likely, and yet South Africa’s police commanders launched their operation against striking miners.

One act was central to converting what had already been a week of killing and confrontation at Marikana in 2012 into a massacre. That was the instruction for the police to launch the operation against the strikers on the afternoon of 16 August. This led directly to the police killing 34 people and seriously injuring many others.

In the days before, there had been many other acts of violence. Three strikers had been killed by police. Seven other people, including two police officers, were murdered allegedly by people associated with the strike.

The Marikana Commission report provides a list of matters to be referred to the North West Director of Public Prosecutions for investigation ‘to determine whether there are bases for prosecution.’ One of these is ‘the possible liability of senior officers in the South African Police Services’ for the shootings that took place on 16 August.

The National Prosecuting Authority (NPA) has initiated prosecutions for some of the killings that took place before that day. But 10 years after the incident, the NPA still has not indicated whether it will prosecute anyone regarding the 34 deaths.

Several South African Police Service (SAPS) ‘tactical units’ – among them the National Intervention Unit and the Tactical Response Team – were deployed at Marikana. They were armed with R5s, a high-velocity rifle developed by the country’s arms industry for use in the border wars of the 1970s and 1980s. Of the 34 miners killed at Marikana on 16 August, 33 were shot by R5 rifles.

There were over 600 SAPS members, including roughly 300 from the tactical units. They were facing a group of around 3,000 strikers, more than 300 of them armed with spears and other weapons. This was not a conventional public order operation intended to disperse the crowd. Instead, the plan envisaged that police would break up the large gathering into smaller groups, which they would then encircle and disarm.

The police believed that they would be met with violent resistance if they tried to disarm the strikers.

Public Order Police (POP) units equipped with rubber bullets, teargas and stun grenades were involved in the operation. But police doubted they could defend themselves effectively if attacked by the strikers. The deployment of the tactical units with their R5s was intended to ensure that the police could get the upper hand if the public order officials were attacked.

There was no immediate need for the operation to be launched that Thursday afternoon. Knowing there was a possibility of major bloodshed, the police went ahead. Their plans and preparations gave no serious attention to minimising the risk of police relying on the weapons carried by the tactical units.

The police envisaged being involved in multiple confrontations with armed strikers. If the operation had unfolded this way, more than 34 people could have been killed. Given that they were dispersing a crowd of 3 000, R5 bullets fired at strikers could easily have struck many others in the vicinity who were not confronting the police. Police could also have died in the R5 crossfire.

The operation at Marikana did not go according to plan. Instead, it appears that the police opened fire when there was no attack against them. However many of the police who killed strikers that day, at both Scene 1 and Scene 2, may have believed the miners were attacking or shooting at them.

This does not diminish the culpability of the senior SAPS commanders involved. Considering the massive potential for loss of life, the decision to proceed was reckless and grossly irresponsible.

Regarding accountability, one must consider the role of Zukiswa Mbombo, the North West SAPS provincial commissioner at the time. She was the most senior police member present at Marikana on 16 August and issued the instruction to start the operation.

It’s widely believed that the decision to launch it that day emanated from a political directive approved by police leaders the night before. Nevertheless, Ms Mbombo was informed of the risk of serious injury but insisted the operation go ahead. According to the Marikana Commission report, the provincial commissioner was warned that the action ‘would involve bloodshed. She reconciled herself to the fact that this was so merely asking for an assurance that it would be kept to the minimum.’

Although she was likely acting on the instructions of her superiors and their political bosses, she seems to have failed to properly consider the consequences. In her 31-year policing career, Ms Mbombo had only been involved in operational activities during her first year. After that, she held administrative and financial positions until she was appointed provincial commissioner in 2005.

Perhaps this lack of operational experience meant she did not appreciate the nature of her responsibility in the situation or the scale of the risk. Despite this, she should be one of those who face a formal legal process of accountability.

South Africa’s criminal justice institutions face a heavy burden. They must deal with high levels of violent and other crimes, hold to account those who orchestrated the July 2021 unrest and pursue many corruption cases, including the numerous leads provided by the Zondo Commission.

Notwithstanding this workload, the unresolved accountability issues in relation to Marikana must be addressed if efforts to build the rule of law in South Africa are to have genuine credibility.

Research for this article is funded by the Hanns Seidel Foundation.