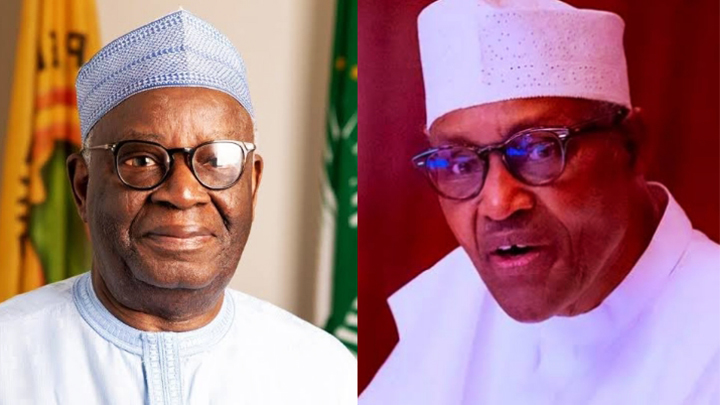 Mr Gambari also described the borders between Nigeria and its neighbours as artificial.

After over seven years in office, President Muhammadu Buhari’s mindset on foreign policy became clearer to Nigerians on Monday courtesy of his Chief of Staff, Ibrahim Gambari.

According to Mr Gambari, Mr Buhari’s foreign policy mindset is to first focus on Nigeria, then its immediate neighbours before paying attention to other West African countries, then Africa and the rest of the world.

Mr Gambari’s explanation is arguably the clearest public explanation of how the Nigerian leader sees the country’s foreign policy.

He explained that it was the same mindset that the Nigerian leader had when he was the military head of state (1983 to 1985).

“In his (Buhari’s) earlier incarnation, as Head of State,” Mr Gambari said, “the defining feature of his policies was concentric circle of Nigerian foreign policy. That our interests, our efforts, will be concentrated on promoting Nigeria’s interests in concentric circles at the epicentre; the defence of Nigeria’s integrity, the prosperity, the welfare of its people.”

Mr Buhari’s mindset perhaps explains why the Nigerian leader has ensured that his government executes controversial projects that appear to favour the neighbouring Niger Republic such as the Nigeria-funded rail line being constructed from Nigeria to Niger and the recent donation of vehicles worth over a billion naira to Niger amidst Nigeria’s economic challenges.

The explanation by Mr Gambari also perhaps explains why the Nigerian leader shut the country’s land borders for over a year to essentially punish its neighbours for allowing massive smuggling of goods into Nigeria. Despite the criticism of the policy by the affected countries, ECOWAS, and many Nigerians, the Nigerian leader did not reserve his August 2019 decision until December 2020 when the borders were partially reopened.

Mr Gambari spoke on the foreign policy stance at a reception he organized in honour of two principal officers of the Nigerian president recently honoured by the President of Niger, Mohammed Bazoum.

The honoured presidential aides, who received the highest honour in Niger, are the State Chief of Protocol (SCOP), Lawal Kazaure, and the Senior Special Assistant to the President on Household and Domestic Affairs, Sarkin Ada.

PREMIUM TIMES reported how Messrs Kazaure and Ada were among six Nigerians recently honoured d by the Nigerien president.

At the reception, Mr Gambari also described the borders between Nigeria and its neighbours as artificial.

According to Mr Gambari, those countries sharing borders with Nigeria, including Niger, Cameroon, Benin Republic and Chad, share the same interests and cultural affinities which bind them together.

“All these boundaries are very much artificial,” the chief of staff said. “The Europeans in Congress of Berlin just took a piece of paper and were drawing lines across places where they have never been; they never intended to be, separated people who should be united and uniting people, perhaps, who should be separated.”

“But the leaders of Africa decided that it’s wise to keep those boundaries artificial as they may be because to change them other than peacefully, will be creating even more problems than they can solve. But in any case, whether by those lines, whether artificial or not, Niger/Nigeria share common boundaries, common interests, common concerns their families across the borders.”

The State House Permanent Secretary, Tijjani Umar, congratulated the awardees. He said the challenge of COVID-19, climate change and lately, the Russian/Ukraine war, have impacted the global population negatively and as such, it has become important for countries to watch each other’s back.

He stressed that the honour conferred on the presidential aides has further strengthened the bonds between Nigeria and Niger Republic.

Mr Kazaure, who spoke on behalf of his fellow awardee, said the award was in recognition of the enviable strides made by President Buhari.

He thanked Mr Gambari for organising the reception in their honour.