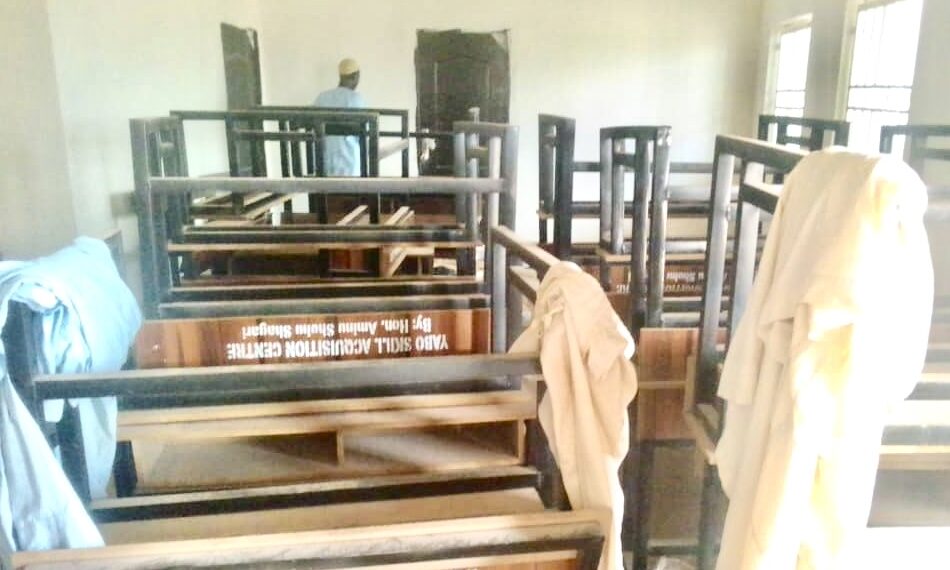 Chairs inside the abandoned skill acquisition center in Yabo_Shagari LGA

Residents of Yabo moan over non-access to a skill acquisition centre, marked completed but not opened.

Faruk Ahmadu, 52, is one of the few literates in Yabo, a community in Sokoto State where most dwellers engage in subsistence farming.

In 2020, when the construction of a building in the village commenced, it was Mr Ahmadu who explained to other residents what the building was meant for and the benefits therein for them.

“I could remember in 2020, people gathered at the project site, glancing at the signboard but couldn’t understand what the contractors were building and how it would benefit the entire community,’’ Mr Faruk, a civil servant, said. “I called people’s attention and told them what the new construction meant and that if completed, all of us will enrol our children there to learn skills that would change their lives in the future.”

Earlier in 2019, Aminu Shagari, the lawmaker representing Yabo/Shagari Federal Constituency in the House of Representatives at the time, nominated the construction of a skill acquisition centre in Yabo Local Government Area, to be located in Yabo community.

However, Mr Shagari lost his seat to Abubakar Yabo in the 2019 general elections, but the project continued.

The project was allocated N40 million and was placed under the supervision of the Small and Medium Enterprises Development Agency of Nigeria (SMEDAN).

Completed but not accessible

There is now a tilt to the story. The construction is complete but the centre is non-functional. Mr Faruk and others who had imagined the benefits of the project and dreamt how their children would acquire skills at the centre are now left in despair.

Completed three years ago, the skill acquisition centre is yet to open for use.

“I thought the centre would be functioning three weeks after the construction was completed. But now, it is three years but nothing is ongoing there,’’ Mr Faruk said. “I hope that when my children finish secondary school, I can take them to the centre to learn skills if it is later opened.”

Sani Jabbi, another member of the community, said the project should not have been situated outside the town. However, he said he would still allow his children to access the centre once it is opened.

“I would like the centre to be opened even though it was built outside the town. My children will be using bicycles or bikes to go and learn things,’’ the 58-year-old farmer said.

Constructed but not equipped

Details of the project, as presented by the former lawmaker, show that funds for both the construction and equipment of the centre were included and allocated. Information from the Office of the Accountant-General of the Federation indicates that funds for 2019 ZIPs were fully released.

However, when UDEME visited the centre, there was very little to show for it. Some areas of the walls had cracked, and the ceilings were sagging.

Faruku Bawa, a 52-year-old security guard at the centre, attended to this reporter during a visit in May.

“I have been taking care of this centre for about three years. I was employed by Faruk Danmadina, a representative of the contractor,’’ he said.

When he opened the interior for UDEME’s inspection, dust and cobwebs were visible. There was no trace of equipment except for some chairs with the tag ‘Hon. Aminu Shehu Shagari’ written on them.

“Nothing is inside, apart from the chairs they brought. They didn’t bring anything again,’’ he added.

Yabo community leader, Muhammadu Maiturare, appears helpless over the condition of the centre.

“I know my position if the centre was commissioned,’’ he said. “I was once a two-term lawmaker and I understand everything. There was a time I was told about what to do with the centre, and l said okay. So, we are three district heads here, maybe they will pick people from each ward. It is his centre (Mr Shagari’s), so we can’t interfere in something that is not ours,” he added.

The community leader also spoke about the current legislator’s effort to open the centre.

“The current lawmaker is doing his best to see that the centre is open but do you think it can be opened without anything inside?” he asked rhetorically.

The Sokoto State Manager of SMEDAN, Mohammed Shuaibu, noted that work was 80 per cent done the last time he visited the centre.

“I know about the project, but the last time I visited there, maybe sometime in 2020 before COVID-19 (pandemic), the work was 80 per cent done and I wrote a report and sent it to the head office. I think the contractor would have equipped the centre and since then, I haven’t visited the centre again,” he said.

Asked about the status of other equipment apart from the chairs, Mr Shuaibu directed UDEME to another official. “There is something behind that and I don’t know it. I urge you to reach out to our head office for a follow-up to know what is happening,” he said.

UDEME got no response from the head office despite efforts to reach them by phone and email.

However, Mr Shuaibu added that power changing hands between the present and past lawmakers contributed to why the centre remained closed.

“You know that the lawmaker that facilitated that project in 2019 is no longer there. And the representative would be the one to decide whether the centre will commence work or not. This is also one of the problems.”

Meanwhile, UDEME tried to reach Mr Yabo, the current lawmaker, through his personal mobile contact but he did not answer or reply to calls and messages sent to him.

The Executive Director of the Network for Employment and Development Initiative (NEDIN), Peter Hassan, said the project is probably not centred around citizens’ needs and as such cannot stand the test of time.

“We are supposed to be operating a democracy which is defined as the government of the people. Therefore the citizens or community members should be engaged by the government and senators representing them so that they present their demands for intervention and they can take ownership and ensure its functionality for effective usage,” Mr Hassan said.

He added that corruption and embezzlement of funds budgeted for projects also result in abandonment.

“Another cause is corruption, if the funds budgeted are not used judiciously to equip the completed project. It is the reason why some projects like that are damaged after construction since they are not equipped.”