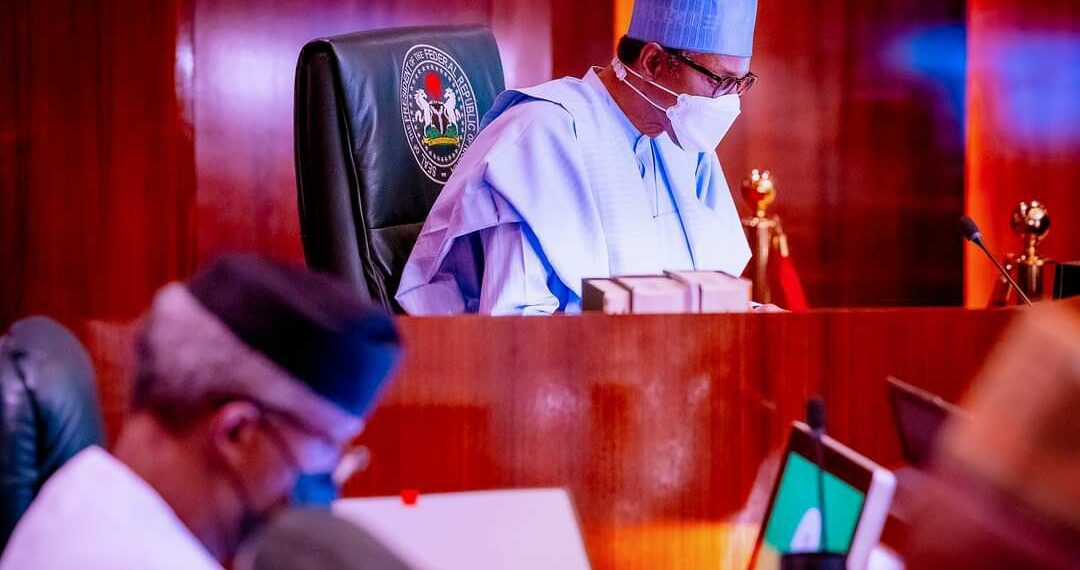 Mr Buhari reportedly said the planned deductions being allegedly championed by both Ministers Malami and Ahmed be suspended until the courts make their final pronouncements.

Sources privy to details of the Executive Council of the Federation’s deliberations told this newspaper that the president gave the directive at the FEC meeting of August 3, where the matter was extensively discussed.

Governors of Nigerian states under the umbrella of the Nigeria Governors’ Forum (NGF) had last week resisted attempts to commence the deduction plan. The governors, in a letter to the federal government, through the Secretary to the Government of the Federation (SGF), Boss Mustapha, argued that an attempt to restart the deduction process, which is being challenged in the courts and for which the Supreme Court has made a pronouncement, would be unconstitutional.

The letter, signed by the Chairman of the NGF and outgoing governor of Ekiti State, Kayode Fayemi, described the new move as an “attempt by the Attorney General of the Federation (AGF), Abubakar Malami, and the Minister of Finance (HMF) to circumvent the law and the recent judgement of the Supreme Court by surreptitiously securing the approval of the FEC to effect payment of the sum of $418 million to four contractors who allegedly executed contracts in respect of the Paris Club refunds to the states and local governments.”

At the FEC meeting on Wednesday, PREMIUM TIMES understands Mrs Ahmed and Mr Malami tabled a memo asking the cabinet to approve the restart of the deductions from funds due to states from the federation account.

Sources told this newspaper that prior to Wednesday’s meeting, the governors had separately written to all ministers explaining their position and seeking their intervention to stop the planned deduction being vigorously pushed by the ministers of justice and finance.

Our sources said after Mrs Ahmed, and Mr Malami made their presentations, they were immediately fiercely countered in quick succession by the Minister of Works, Babatunde Fashola; the Minister of State for Labour, Festus Keyamo; the Secretary to the Government of the Federation, Boss Mustapha and two other cabinet members.

The FEC members who spoke against the deduction were said to have told the meeting that it would be sub-judicial for any payment to be made to the contractors while cases are pending in courts.

They also reportedly argued that it was insensitive of Mrs Ahmed and Mr Malami to have tabled a proposal for the payment of controversial debts to contractors at a time the government is struggling to pay workers and fulfil its obligations to citizens.

“The ministers argued that since the issue is being challenged in court, and there is a supreme court pronouncement in place, it would be illegal to go ahead with the planned deductions,” a source told this newspaper. “The argument against the planned deductions was also made within the context of the nation’s economic crisis, poor revenue, and uncertain fiscal position.”

Against the backdrop of the arguments advanced by the ministers, Mr Buhari was said to have spoken in support of the ministers’ position, adding that the planned deductions being allegedly championed by both Mr Malami and Mrs Ahmed be suspended until the courts make their final pronouncements.

In their letter to Buhari last week, the governors argued that the essence of the definitive pronouncement by the Supreme Court is that none of the contractors recommended for payment of the sum of $418 Million by the AGF and finance minister can be so paid because the contracts and payments relied upon were not processed as prescribed by the constitution and the law.

President Buhari had initially approved the payment of the money to the contractors through the issuance of promissory notes. The president’s approval was based on proposals by the Attorney General of the Federation, Abubakar Malami, and the Minister of Finance, Zainab Ahmed. The plan was, however, fiercely resisted by the 36 state governors who approached the court for redress through their attorneys-general.

The governors argued that the matter was on appeal at the Court of Appeal in Abuja, adding that the Nigerian government should exercise restraint in its handling of the matter.

“Significantly, while that appeal is pending, one of the contractors, who is a beneficiary of the Promissory Notes in the sum of $USD 142,028,941.95, Riok Nigeria Limited and who had lost at the Court of Appeal, further appealed to the SC in SUIT NO: SC 337/2018 BETWEEN: RIOK NIGERIA LIMITED V INCORPORATED TRUSTEES OF NIGERIA GOVERNORS’ FORUM &7 ORS. The Supreme Court on 3rd June 2022 also dismissed Riok’s appeal as lacking in merit,” the NGF said.

The governors argued that the Supreme Court had, on the occasion, made clear that neither the NGF nor ALGON had the power to award contracts and charge the same directly to the Federation Account as done in this case.

“The dismissal of RIOK’S case by the SC also affected the payment of $1,219,440.45 and $215,195.36 to two private lawyers to RIOK, NWAFOR ORIZU and OLAITAN BELLO, who are also beneficiaries of Promissory Notes by the DMO,” the letter said.

“Besides RIOK and the two lawyers, the States have also challenged either on appeal or other courts the claims by the other contractors including DR. TED ISIGHOHI EDWARDS ($159,000,000), NED NWOKO ($68,658,192.83) and PANIC ALERT SECURITY SYSTEMS LTD ($47,831,920). These cases are pending, and no steps ought to be taken to enforce the Judgment and alter the status quo until the matters are fully determined. A Caveat issued to restrain all parties concerned and the public from dealing or honouring Promissory Notes issued had earlier been published.”