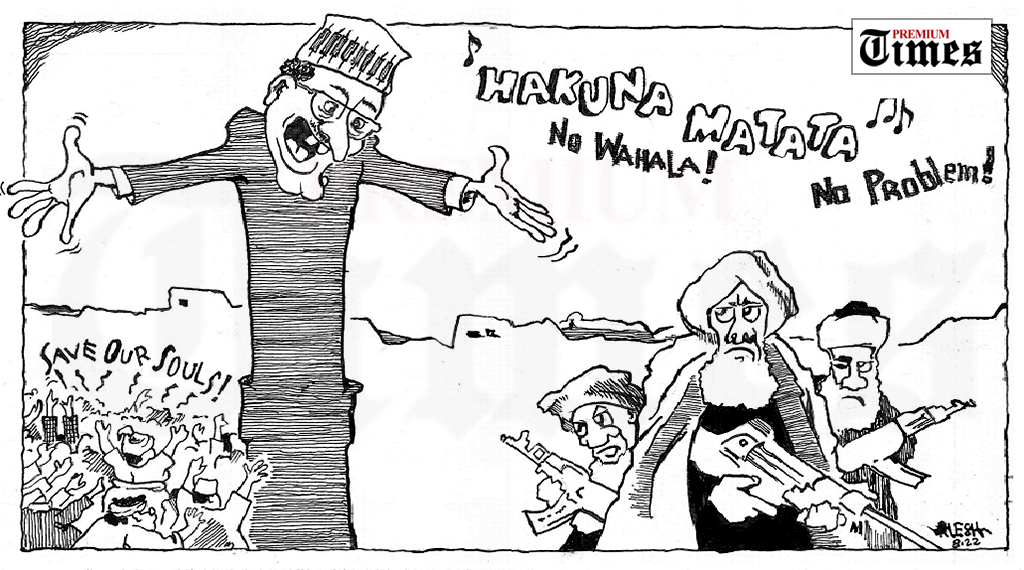 PREMIUM TIMES proposes that the administration should retool its gaze to a robust assertion of the human development elements in the definition of its security mindset.

Coming from two recent successful, high-profile terror operations, the Islamic State’s West Africa Province (ISWAP), seems set for its biggest prize yet – its conceited declaration of kidnapping the Nigerian president. In March this year, a detachment of the group, operating mostly around the forests between Kaduna and Niger State, deployed to blow up a Kaduna–Abuja train off its tracks, murdering scores, and kidnapping about 62 people, from whom they have so far extracted an average of about N100 million naira from each of the 35 victims released so far. As exasperated negotiators with the terrorists would later say, the pitiless killers have no reason to publicly communicate their motives because “the president and your leaders know our demands.”

After some sham motions in government circles, the abducted train riders were abandoned to their fate, scrambling through tortuous paths to pay their ransoms, while elected officials in Abuja traded blames but offered no accountability. Then in July, another ISWAP detachment, with possible operational support from Ansaru, a breakaway faction of Boko Haram and affiliate of Al-Qaeda, operating mostly in Kaduna and Kogi States, struck at the heart of the Nigerian capital, Abuja. Storming the Kuje Medium Security Prison in the capital city, the terrorists killed at least one of the security personnel, and liberated 879 inmates (among them 64 Boko Haram members and other criminals), in an operation that reportedly lasted over three hours.

The Kuje attack has elicited curious responses from Nigerians. Traditionally, every time the world around President Buhari seemed to quake and cave, he had responded with his well-known milquetoast demeanour, suggesting all is well and okay; Hakuna matata, as they say in Swahili. Strangely, however, in this one rare instance, in perfect rhyme with the novelist, Ayn Rand, who warned that “You can ignore reality, but you can’t ignore the consequences of ignoring reality,” an awakened President Buhari was at the site of the vicious assault, inspecting damages, asking thoughtful questions, and promising consequences.

Far from being done, shortly after the Kuje operations, the now metastasised terror footprints across the northern half of the country ventured further. In quick succession, they engaged an “advance security team” of President Buhari in a gun match, in his home state of Katsina, and a few weeks after, went into a gun duel with members of his personal/perimeter security team, the 9th Guards Brigade, the pride of the Nigerian Army infantry, at Bwari District in Abuja.

Then, after releasing a chilling video of cruelly flogging abducted train passengers who had not secured their ransoms, the terrorists pressed ahead, this time with a message to the president: “This is our message to the government of Nigeria, and just as you have seen these people here, by God’s grace, you will see your leaders. Your senators and governors will come before us,” they promised, then proposed that: “these ones you are seeing here, we will keep some as our slaves and sell them off just as our Imam told you in the past. Just like the Chibok girls that were sold off, we will equally sell these ones as slaves.” Just in case the country thought this was a joke, and the government failed to address their demands, the terrorists pressed on a personal touch: “If you don’t adhere to our demands, we will kill the ones we need to kill and sell the remaining. By God’s grace, El-Rufai, Buhari, we will bring you here.”

The messaging was intense craftsmanship. Referencing Chibok was meant to convey multiple lessons to a now hapless country struggling to make sense of its presidency. Hakuna matata. Eight years ago, a still ideologically and organisationally inchoate Boko Haram obtained an instant global celebrity status when it abducted 276 students of the Government Girls Secondary School (GGSS), Chibok, in Borno State. A global hashtag #BringBackOurGirls enlisted proud bearers from the four corners of the world, including the United Nations’ leadership. The then American First Lady, Michelle Obama, felt honoured to pose with the #BringBackOurGirls poster.

ISWAP’s Chibok messaging was to bring back the memory of a failing leadership. As such, for those who might want to argue that one of the great ironies of that unfortunate mass abduction was the emergence of the Safe Schools Initiative, which has now helped rebuild and put back some 50,000 children to school in Nigeria’s North-east, where Boko Haram’s antediluvian ideology woefully conflates secular education (the backbone of modern civilisation) with “Western education,” and therefore outlawed it as unacceptable, ISWAP wanted to remind Nigerians that at the time of this occurrence, the role that President Muhammadu Buhari’s party played was in orchestrating the impeachment of then President Goodluck Jonathan, who they mercilessly dubbed as clueless.

Today, eight years after the Chibok tragedy, with many of the girls still in captivity, another 1,500 children in captivity all over the country, and with kidnapping itself now elevated into a thriving industry, run by terrorists and “professional kidnappers,” complete with a spotted business model (all these under the watch of a president with famous claims as a tough military general), the temptation is irresistible to compound the images, the context, and the messages on screen, then and now, with a verdict that if President Jonathan lacked an adequate appreciation of Section 14:2[b] of the Constitution of the country, that “the security and welfare of the people shall be the primary purpose of government,” President Muhammadu Buhari has certainly not convinced Nigerians that any lessons have been learnt in that department.

For this reason, the subliminal morals in ISWAP’s cynical promise to abduct the president, along with other senior elected officials, must be keenly extracted. Neither the position of the vituperative Islamic cleric who has endorsed this sneering proposal in a viral video, nor the mocking comments by the president’s one-time ally, Buba Galadima, should be allowed to endure.

The president is the representation of the collective will of citizens in their democratic quest for purposeful leadership and that is why, in a co-equal branch democracy, the president is invested with the status of Head of State and Commander-in-Chief of the Armed Forces. To be sure, some will come short, some adequate, others will perform beyond the call of duty. Ultimately, the hope is that the actual practices and exercise of democratic demands will bring all the components into proper alignment, with each branch playing its role dutifully – alongside citizens, the press, and civil society organisations, all carrying their can with dignity and responsibility.

That said, a more helpful way to understand the ISWAP plan to abduct the president is a call to evaluate his stewardship and presidency at the twilight hour of his eight-year leadership as “Head of State and Commander-in-Chief of the Armed Forces”; the one job we hired him to perform in 2015. In this quest, the economy, insecurity, and unemployment are the three valid themes to assess. For whereas the APC developed a 15-point platform for the 2015 election and campaigned on those grounds, once elected, President Buhari’s shocking revelation was that he only campaigned to work on the three purposes of the economy, insecurity, and unemployment!

On scrutiny, the president was right. While the party was busy selling the vision of a world beyond PDP and the Jonathan presidency, Buhari himself, as most people have said, never spoke outside his chosen triangular themes. He would later consecrate this vision in his legendary inauguration speech of “I belong to everybody, and I belong to nobody,” a frisky but laden annunciation of a president destined to govern independently of his party’s preferences; a president who has, in essence, used a party as a special purpose vehicle to achieve the goal of a long sought presidential ambition.

With unemployment steadily peaking in double digits, the economy near comatose, the official testimonials of Buhari’s problematic presidency, in these two departments alone, would recommend him for a failing grade. Regarding his management of the insurgency, however, President Buhari owes Nigeria a special session of debriefing. He sought and built the security and intelligence institutions to his preference in ethnic choice, religious inclination, and operational idiosyncrasy. He has had a rubber-stamp parliament, and a relatively well-resourced appropriation to the sector. The judiciary, once cowed, became pretty much a compliant body, so there was really no excuse for the awfully reprehensible grades the president has obtained in this regard.

PREMIUM TIMES proposes that the administration should retool its gaze to a robust assertion of the human development elements in the definition of its security mindset, to embrace true investment tokens for rural citizens, an honest agricultural and water policy, processing and value addition to primary agricultural and mining activities, as well as a massive jobs programme for young people. If this is complemented with a functioning primary health care policy, it will become apparent that the current counter-insurgency strategy has merely built a massive war economy around the pockets of Generals, military contractors and their political allies. Sadly too, big guns and bombs may sound sexy, yet they never won wars of poverty, inequality and minds made warped by disinformation. In the short run, also addressing policing, as in the absurd case of Niger State, where 4,000 policemen and women are providing security across nine million hectares, will be a meaningful step to take. This will be through expanded enlistments, community-focused enforcement, and technological support. In the final analysis, a decentralised policing philosophy needs to percolate into our policy landscape quicker.

As a complement, serious and targeted attention to current rural communication and rural power development policies will also be a huge step in the right direction. A listening ear, however, will be the most solid asset of all. Ability and willingness to listen to every shade of opinion in the understanding that diversity is a strength, not a curse, especially in a pluralistic community.

The president, now virtually a lame duck, cannot be expected to renew himself radically around these proposals. It is on this ground, at any rate, that the opposition party, the Peoples Democratic Party (PDP), proposed in the National Assembly last week to move for impeachment proceedings against the president. PREMIUM TIMES wishes to differ. Impeachments are powerful tools to cure failing elected office holders of their accountability deficits; but as a former lawmaker, Shehu Sani, said on PREMIUM TIMES’ Twitter Spaces last week, putting Buhari through this process now will be time-wasting, a loud distraction, and an unachievable goal. It is just eight months until the election of a new president, and that may be the best path for Nigerians to demonstrate their preference.