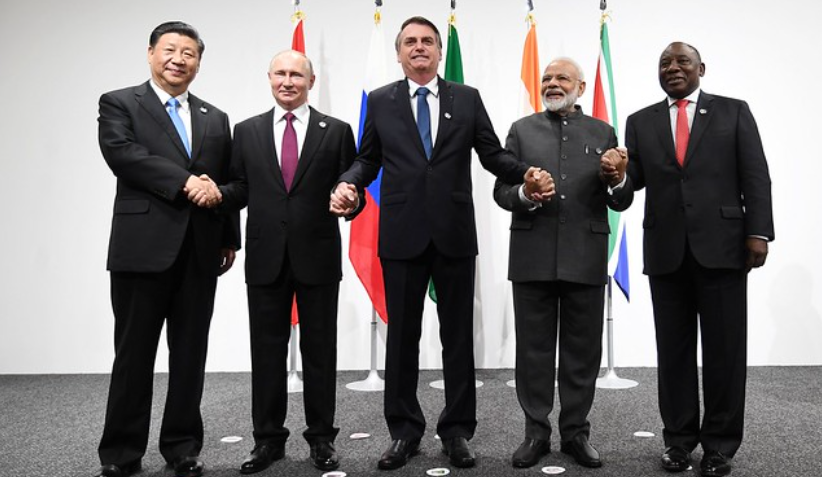 Group Photo of Leaders of BRICS member nations on the sidelines of G20 Summit in Osaka (June 28, 2019)

Expanding BRICS to create an alternative power bloc is enticing for many countries, but faces several practical limitations

Recent speculation that the BRICS group (Brazil, Russia, India, China and South Africa) plans to expand its membership has set tongues wagging in the diplomatic world. Rumours that Argentina could be the newest country to join have triggered questions around the viability and power of an expanded collective, and what it means for global geopolitics.

Cynics believe it’s simply a backdoor strategy by China to expand its sphere of influence. For advocates, it’s a long overdue initiative that will present a credible economic and political counterweight to Western dominance.

Could an expanded BRICS really emerge as an alternate power bloc? There’s long been a clamour among its members for larger power centres that offer alternatives to Western-dominated constructs.

Collectively BRICS is home to 26 per cent of the world’s geographic area and about 42 per cent of the world’s population. Moreover, the group is under-represented in the global financial system. The five nations combined hold less than 15 per cent voting rights in both the World Bank and the International Monetary Fund (IMF), yet their collective economies are predicted to surpass the G7 economies in size by 2032.

The rationale behind the push for a fairer, more representative economic architecture is understandable and resonates with many in the global south who believe their interests aren’t adequately represented at existing fora.

Argentina especially is intriguing, given its tumultuous relationship with the IMF and historical dependency on Western institutions to navigate sovereign debt crises. Between seeking new financing options from China (Belt and Road Initiative) and sourcing its vaccines from Russia, there’s clear strategic intent to reset its geopolitical and geoeconomic relations. Several other dissatisfied countries from the global south have expressed a similar desire to join BRICS, which they believe will better serve the interests of developing nations.

Esteban Actis, a Researcher at Argentina’s National University of Rosario, says Russia’s invasion of Ukraine could also lead to a fragmentation of global governance, with less weight given to forums like the G20. Given this, China appears keen to expand BRICS to make the bloc more robust and add new countries to promote their development.

Beijing, which holds the rotating presidency of BRICS this year, is therefore mounting a charm offensive. Recent reports suggest China intends to argue for the inclusion of Argentina, Egypt, Indonesia, Kazakhstan, Saudi Arabia, United Arab Emirates, Nigeria, Senegal and Thailand. Insiders believe Beijing’s motive is to restructure and expand BRICS under its leadership and dilute Brazil and India’s role.

Although there’s broad enthusiasm for expansion, the initiative faces practical limitations. First is the ideological disconnect between the current BRICS members. The acronym is a catchy soundbite, but the commonalities between member states are limited. Apart from being regional hegemons and having large land masses with sizable populations, there’s not much else in common.

The collective includes notional democracies and autocracies, commodity importers and exporters, and fundamentally different economic and political values and visions. Since its 2009 inception, BRICS has largely failed to live up to its promise, largely due to internal governance crises.

There is also deep friction between the group’s two most prominent players. New Delhi is unlikely to approve the expansion for fear that new members will support Beijing. The relationship between India and China has been tense because of perceived encroachment in the Indian sub-continent, conflict over the Ladakh border and inherent distrust around China’s technology.

It is also doubtful that India – which has its own global geopolitical aspirations – will be happy to take a junior role in this power formation. Moreover, given India’s historic alignment with the West and continued membership with the Quadrilateral Security Dialogue, this inherent tension will probably linger.

Although somewhat more supportive, Moscow also argued that ‘the entrance ticket’ to BRICS was independence and sovereignty, and under no circumstances should potential candidates be called China’s satellites. If Brazil and South Africa adopt a similar stance, consensus could be even more elusive.

The second practical limitation to expansion relates to finances. South Africa, Russia and Brazil are all battling their own domestic and external money issues, so their financial firepower would be constrained. This suggests that the institutions underpinning the new formation would be primarily funded by China, allowing Beijing to form them in line with its values, like with the New Development Bank.

But China is also navigating its own economic problems since COVID-19, making Beijing more selective in its international efforts. This is evidenced by the issues facing the Belt and Road Initiative which, according to the Financial Times, is ‘morphing into a financial firefighting operation on a grand scale.’ Circumstances may force Beijing to become more selective in its global efforts, which may compromise its ambitious plans for BRICS.

The third is bureaucracy. Beijing hasn’t yet indicated the criteria for who precisely should become new members. The 23 June virtual summit declaration said leaders would continue discussing the possibility of admitting new countries based on ‘full consultation and consensus.’

Realistically, BRICS cannot mount an immediate challenge to the existing global system. However, its members justifiably want a greater say in how that system is governed, now and in the future.

What all BRICS nations really share is a deep desire for more influence over the rules governing international finance and economic policy. And each member has an alternate perspective on the existing global economic order.

Three other factors have renewed the impetus for this initiative. First is the ‘confidence consequence’ of the attack on multilateral systems, especially during the Trump era, which eroded the legitimacy of these bodies. Second, the North’s behaviour during COVID-19 – especially through ‘vaccine apartheid’ – has pushed developing countries to seek more dependable and fairer alliances. Third, the West’s narrow Cold War mentality around the Russia-Ukraine conflict has alienated developing nations who don’t want to pick sides.

In this context, the shift towards an expanded BRICS is inevitable over the longer term, Sanusha Naidu of the Institute for Global Dialogue told ISS Today. However, it will occur gradually, with new members unlikely to receive the same rights, participation or access as the founders.

The intention isn’t for an enlarged BRICS to be a silver bullet. The expansion is less about growing the power base and more about creating alternative alliances and options away from the current dollar dependency and Western hegemony. ‘It’s like being at a playground and picking another seesaw to play on,’ she says.

Despite its obvious limitations and contradictions, the idea of forming an alternate node of power to rival the traditional global liberal order is compelling and ultimately unavoidable. The value of any potential expansion is therefore in its deep symbolism, complementarity and agency.