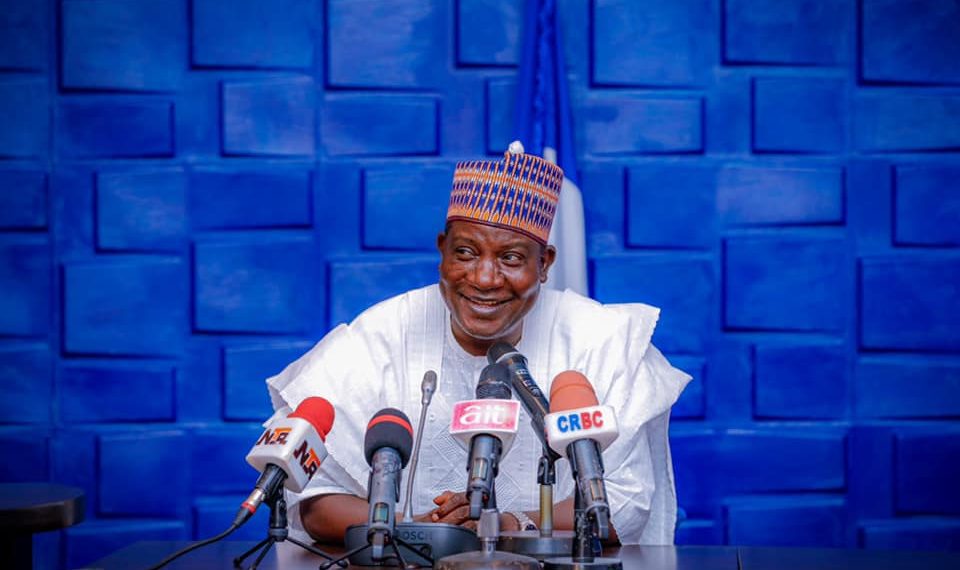 The National Chairman of the party, Abdullahi Adamu, announced this on Thursday while briefing journalists

The All Progressives Congress (APC) has appointed Governor Simon Lalong of Plateau State as the director-general of its presidential campaign for next year’s general election.

Mr Adamu also announced that the Minister of State for Labour and Employment, Festus Keyamo, has been appointed interim spokesperson of the APC presidential campaign council.

When asked why the party arrived at the choice of Mr Lalong as the campaign director general, he said it was based on Mr Lalong’s ability to deliver.

“The party has taken a very careful deep look at the Nigerian situation and the political space and we believe very strongly that notwithstanding the expression that we’re hearing, we will be working on amicable solutions to the sentiment and we’re very sure by the grace of God we will put them to rest before the elections,” he said.

The APC is facing backlash over the Muslim/Muslim ticket it has presented. Some members of the APC Northern Christian Leaders, led by Babachir Lawal, have been very vocal against the same faith ticket.

Other members of the APC Northern Christian Leaders include the former Speaker of the House of Representatives, Yakubu Dogara; Elisha Abbo, a senator representing Adamawa North and Solomon Dalung, a former minister.

The choice of Mr Lalong, a Christian from the North-central, is perhaps a move to appease those against the same faith ticket.

Speaking on his choice as the DG of the campaign, Mr Lalong said he was picked based on his capacity and his position as the Chairman of the Northern Governors’ Forum.

“Second, I’m not only the Governor of Plateau, I’m chairman of the Northern Governors’ Forum. So I am able to carry out leadership in any capacity. I only want to express to you that I am surprised that I’m being announced now. I am sure we’ll not disappoint you,” he said.