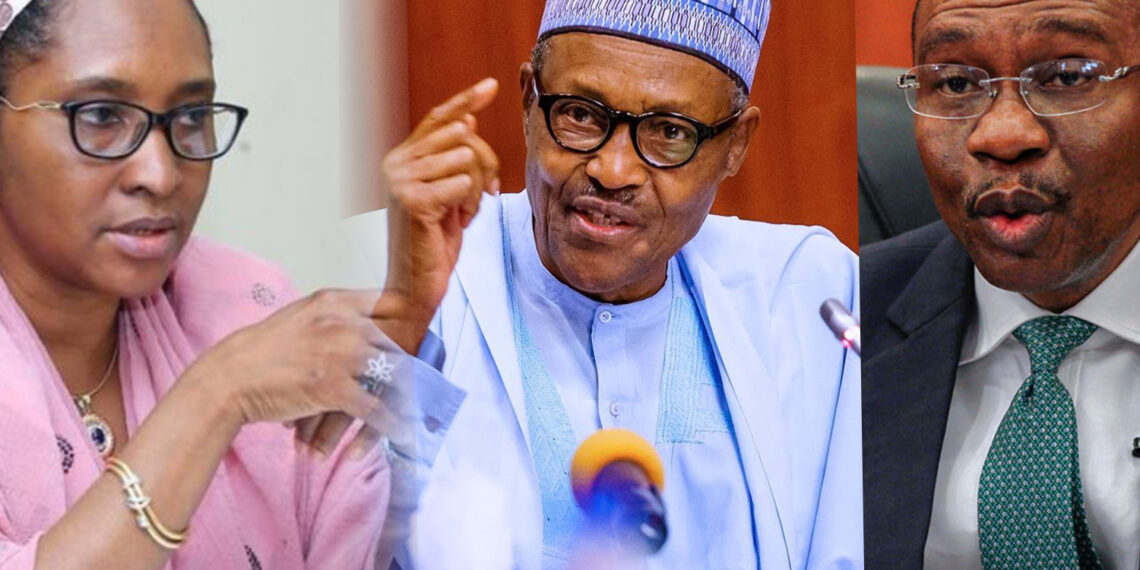 With Nigeria spending N5.9 trillion on imports in the first quarter, irrespective of the preferred exchange rate, reserves of $15 billion would barely cover four months of import.

As Nigeria prepares for general elections next year that promise to be one of the most keenly contested in its history, evidence is emerging that the economy faces a double whammy: an empty treasury and rapid decline.

Government officials and business leaders knowledgeable about the situation say there have been concerns in Abuja and Lagos after an elected official drew the attention of the Central Bank of Nigeria governor, Godwin Emefiele, to the fact that Nigeria’s external reserves amount to only $15 billion, well below the $36 billion balance on the gross external reserves claimed by the bank.

With the country spending N5.9 trillion on imports in the first quarter of the year, irrespective of the preferred exchange rate, reserves of $15 billion would barely cover four months of import.

Financial analysts claim this would not have mattered much but for recent difficulties in different sectors of the economy, especially the export constraints that have seen the nation’s petroleum monopoly unable to add to the reserves in the last six months.

The NNPC’s inability to remit oil sales receipts to the CBN, despite elevated crude oil prices, is seen as one reason why the naira has nose-dived recently in the parallel market.

A banker who spoke on the understanding that her name would not be included in this report, said the reported balance on the gross external reserves has long concealed problems.

Not only is the gross balance on the external reserves not an accounting one (according to the CBN, the reserve is a 30-day moving average with effect November 2011), by not excluding the apex bank’s contingent liabilities, the report flatters the resources available to the central bank to defend the economy’s external position.

The elected official is believed to have briefed President Muhammadu Buhari on the gravity of the economic crisis. The presidency did not respond to a request for comment.

The NNPC’s transformation into a public limited liability company further compounds the problem. By not being able to remit export earnings directly into the federation coffers, it would mean that the apex bank will look to other sources of foreign exchange inflows.

Most of these sources have however been choked off by the direction and trajectory of the CBN’s monetary policy. All these mean that if the external reserves are depleted within four months at the current rate, the country will no longer be able to pay for imports of food, medicines and materials and spare parts required by industries, an economic crisis similar to what Sri Lanka is experiencing.

While continued export of crude oil by the NNPC may enable the continued import of refined fuel, experts do not expect this to stem the economic collapse caused by the end of the import of consumer and capital goods.

Widespread shortages will become readily evident as shops’ shelves will become empty while the prices of the few items available will keep increasing, putting them out of the reach of most citizens. CBN spokesperson Osita Nwasinobi did not respond to calls and a message seeking comments.

Nigeria is already facing serious fiscal problems, with its rising budget deficit, debt and shrinking revenue. In July, PREMIUM TIMES reported how the country’s fiscal position worsened in the first four months of the year as the cost of repaying debt surpassed the government’s revenue in the first quarter of 2022.

Nigeria’s Minister of Finance, Budget and National Planning, Zainab Ahmed, warned that urgent action is needed to address the nation’s revenue challenge and expenditure efficiency at both the national and sub-national levels.

The report showed that gross oil and gas federation revenue for the first four months of the year was projected at N3.12 trillion but as at April 30, only N1.23 trillion was realised, representing a mere 39% performance. Despite higher oil prices, the report showed that oil revenue underperformed due to significant oil production shortfalls such as shut-ins resulting from pipeline vandalism and crude oil theft as well as high petrol subsidy cost due to higher landing costs of imported products.

Further analysis of the nation’s fiscal performance showed that deficit spending shot up to N3.09 trillion in the first quarter of 2022 as pro rata spending target for the period was N5.77 trillion, while the actual spending as of April 31 was N4.72 trillion.

On the other hand, as of April 2022, the nation’s retained revenue was only N1.63 trillion, 49% of the pro rata target of N3.32 trillion, putting the deficit between actual spending and revenues at N3.09 trillion.

In effect, the government borrowed to cover the deficit.

Meanwhile, a breakdown of the government’s actual spending within the period showed that N1.94 trillion was for debt service, N1.26 trillion for personnel costs, including pensions, while a meagre N773.63 billion was spent on capital expenditure.

PREMIUM TIMES understands that in addition to the president, state governors and other top officials have also been made aware of the severity of the crisis and some of them are already pressing the federal government to adopt specific measures to stem the crisis in the economy and address security threats.

Included in the economic rescue package proposed to the FG are measures in aid of fiscal stability: cutting federal expenditure by N8 trillion in the short term, immediate action to restore fiscal discipline, cutting the cost of governance across the three tiers of government, abandoning the fixed exchange rate policy, and limiting the CBN to its core monetary policy mandate.

About N7 trillion of the expected cut in public expenditure is fully dependent on ending the subsidy on petrol.

Until recently, the NNPC usually remits $3 billion monthly from crude oil sales to the nation’s reserves. But it has not remitted up to $200 million for up to a year now.

Last week, the Minister of Labour and Employment, Chris Ngige, called for restraint because the nation was broke. Addressing a media briefing to mark the 2022 World Day Against Child Labour in Abuja, he said the Nigerian government does not have money to prosecute capital projects next year, a development that might worsen the nation’s unemployment and poverty conditions.

“I can tell you that Nigeria is broke,” Mr Ngige said. “There is no money to fund capital projects next year. As you can see, the dollar that has been hovering around N500 and N600 is now above N700. The truth is that there is no money anywhere. The money that the FAAC (Federation Account Allocation Committee) has been sharing is money from taxes, customs and other revenue-generating agencies.

“The National Nigerian Petroleum Company Limited (NNPC) no longer remits money to FAAC. So, the situation calls for patriotism from all Nigerians. The lack of money to fund capital projects would have implications on capacity to create jobs. If jobs are not created, poverty will increase in the country.”