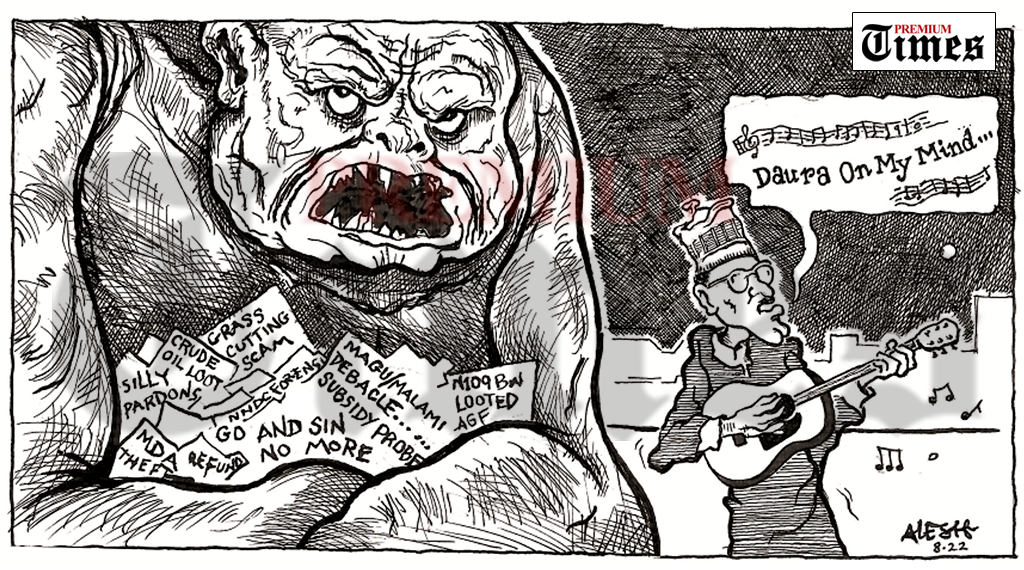 Tragically, cronyism and nepotism in Buhari’s key appointments have conflated with the working of government agencies at cross-purposes to fuel corruption.

Overwhelmed by challenges of governance, President Muhammadu Buhari has said that he is eager to leave office. He made the confession when governors of the ruling All Progressives Congress (APC) paid him Sallah homage in Daura, Katsina State. “It has been tough,” he quipped. The president has just 10 months for his wish to come to pass. One of the issues that have constantly gnawed at his government has been corruption. He had pledged to cripple it during the 2015 electioneering with his well-known refrain: “If we don’t kill corruption, corruption will kill Nigeria.” Sadly, the epidemic has become so contagious that some argue that it has now reached fairly overwhelming proportions.

Tragically, cronyism and nepotism in Buhari’s key appointments have conflated with the working of government agencies at cross-purposes to fuel corruption. A House of Representatives ad-hoc committee is currently conducting a probe into the controversial fuel subsidy regime, which has had the national treasury haemorrhage for years. It is ridiculous that no public entity, including the President, as the substantive minister of Petroleum Resources, the Minister of Finance, Budget and National Planning or the National Assembly, with oversight powers over public expenditure, can state with certainty the quantity of fuel consumed daily in Nigeria. And hence the rightful amount of subsidy payment required for this volume.

The House estimates that Nigeria consumes between 40 and 45 million litres daily, but is worried that the NNPC Ltd uses between 65 and 100 million litres per day to determine subsidy charges as contained in its monthly reports to the Federal Accounts Allocation Committee. As such, the huge incongruity between these figures is indicative of the massive corruption that Buhari’s government has condoned for the past seven years, despite what have also been recurrent public demands for accountability over this enormous discrepancy, which have largely been to no avail. Besides, a weak regime and its complicit security personnel at our land borders cannot contain illegal petroleum product marketers, who often smuggle the subsidised fuel into neighbouring countries. This contributes to debilitating perennial shortages and inflated costs of the commodity at home.

In a motion that set the stage for the inquest, Hon. Sergius Ogun said there is evidence that subsidy charges on petrol are duplicated: “Subsidy is charged against petroleum products sales in the books of NNPC Ltd, as well as against crude oil revenue in the books of NAPIMS, to the tune of over N2 trillion,” he noted. Yet, without any empirical template, the President sought, and received legislative approval in April that hiked petrol subsidy to N4 trillion for this year. Inevitably, another Pandora’s Box will be opened at the end of the probe, as a similar investigation unfolded in 2011. Out of N2.5 trillion claimed as subsidy then, a total of N1.7 trillion was discovered to have been paid illegally to fraudsters who never imported any fuel. The key actors involved included government agencies, such as the NNPC. The revelation had then compelled the government to review subsidy payments downwards to N971 billion, as the 2013 and 2014 budgets evinced.

In addition, crude oil is still “stolen on an industrial scale” on Buhari’s watch, as the United Kingdom think-tank, Chatham House, characterised the heist in 2013. Consequently, Nigeria cannot meet its OPEC production quota of 1.8 million barrels per day, and is struggling with an output of 1.25 mpd. The Nigeria Upstream Petroleum Regulatory Commission (NUPRC), Oil Producers Trade Section, and Independent Petroleum Producers Group reported an estimated $3.2 billion worth of crude oil theft between January 2021 and February this year alone. The Bonny Terminal that should receive 200,000 barrels of crude per day, had instead received a measly 3,000 barrels per day, which forced Shell to declare a force majeure in the first quarter of this year. This act of economic sabotage is perpetrated by both locals and foreign nationals, with the assistance of complicit military personnel, who have the responsibility to avert oil theft and secure our porous maritime spaces. Nobody has been held to account for this illicit trade till date.

Nigeria’s floundering anti-graft campaign is why the country is now on a fiscal cliff. Debt services gulped N1.9 trillion in the first four months of this year — exceeding the N1.3 trillion revenue within the same period. Government revenues go into private pockets, dodgy accounts of ministries, departments and agencies of government and collusive banks that have side-tracked the Treasury Single Account introduced to checkmate abuses in revenue generation. This fact came into bold relief with the Minister of Finance, Budget and National Planning, Zainab Ahmed’s revelation that N5.2 trillion of public funds are with ten MDAs. Only N53.5 billion of the amount was recovered as of April, after an 18-month effort.

With no political will to push policies through and the MDAs working in opposite directions, bureaucrats and political appointees see their offices as vast acres of diamond to be mined for personal benefits. A penal regime that allows a former Comptroller of Nigeria Customs Service, who stole N40 billion, to return just N1.5 billion in a plea bargain makes a mockery of President Buhari’s anti-corruption campaign. Again, fiscal governance that allows an Accountant-General of the Federation to allegedly siphon N109 billion is clearly ineffective.

The Economic and Financial Crimes Commission (EFCC) could have made more progress, it seems, but for the serial interference of the office of the Attorney-General of the Federation and Minister of Justice, Abubakar Malami (SAN). This sparked the dissonance between the AGF and the former Chairman of the Commission, Ibrahim Magu that set the chain of events leading to Magu’s suspension and an inquest for alleged abuse of office by a panel chaired by retired Justice Ayo Salami. Strangely, the findings of the panel have not been made public. Instead, Magu was promoted to the rank of Assistant Inspector-General of Police (AIG) and then retired.

ALSO READ: I’m proud to leave behind legacy of fighting corruption in 2023 – Buhari

Interference in corruption cases, as is usual in this administration, negates genuine anti-graft drive. Yes, the AGF, by virtue of Section 174 (1) (2) (3) of the 1999 Constitution, as amended, has powers to take over any criminal proceedings instituted by any authority or discontinue this. However, such action, the constitution emphasises, “Shall have regard to public interest (and) the interest of justice….” PREMIUM TIMES finds it difficult to see how the AGF’s actions are driven by these ideals. The Danjuma Goje alleged N25 billion corruption trial by the EFCC, traded off by this administration on the altar of political expediency in the Senate, will continue to raise questions about the sincerity of Buhari’s anti-corruption fight.

Encouraged by how this odd routine from the AGF has served the interest of public officeholders, rather than the public good, a senator facing a corruption trial, sponsored a Bill to amend the Administration of Criminal Justice Act (ACJA). The bill seeks to ensure that case files are submitted to the office of the AGF by prosecuting agencies for his imprimatur. At a Public Hearing on the bill by the Senate Committee on Judiciary, the EFCC chairman, Abdulrasheed Bawa, opposed the move, stressing that, “This will constitute undue interference by the AGF,” who is a political appointee, in the work of law enforcement agencies. His counterpart at the Independent Corrupt Practices and Other Offences Commission (ICPC), Bolaji Owosanoye, concurred. PREMIUM TIMES firmly believes that this is a legislative ambush, intended to defang anti-graft operations. Nigerians and civil society organisations should vehemently resist this devious and criminogenic drift.

An anti-corruption president with no moral scruples in appointing tainted friends and individuals on corruption trial as ministers, as Buhari has repeatedly done, cannot be taken seriously. It is on record that a serving cabinet member, Bashir Magashi of the defence ministry, refunded $400,000, out of $550,000, to the Federal Government from a frozen account in 2001, held on his behalf at the Jessy, UK branch of bank PNB Paribus. This was money acquired from illegal crude oil allocation during the Sani Abacha regime.

In accordance with our laws, people are innocent until proven guilty. However, to appoint into public office people undergoing trial lowers the bar in the quest for probity and accountability. Countries fighting corruption head-on are drifting from emphasis on legalism to the primacy of morality in dealing with money laundering cases. This is what the UK’s Unexplained Wealth Orders (UWO) seeks to achieve. Assets – cash or property in excess of £50,000 – are seized by law enforcement agencies, until the owner proves the legitimacy of such possession. The burden of proof of innocence is on the owner, not the government. This is similar to the paradigm shift in Switzerland where “you have to prove that you have earned that money legally,” before any deposit could be made in any Swiss bank, as its erstwhile Ambassador to Nigeria, Hans-Rudolf Hodel, revealed.

These are strong innovative strategies and best practices, which have eluded Buhari’s fight against corruption. Racketeering at Nigeria Immigration Service (NIS) offices in passports procurement remains a problem. The persistent low ranking of Nigeria in Transparency International’s Corruption Perception Index, (154 out of 180 countries in 2021); the endemic fraud in constituency projects by members of the National Assembly with no lawmaker held to account; the grass-cutting contract for which a former Secretary to the Government of the Federation is being prosecuted; the N523 million school feeding scandal during the 2020 COVID-19 lock-down; the president’s signature lethargy that has ensured that the forensic audit report on the Niger Delta Development Commission submitted last September remains a secret document, are hallmarks of failures in the anti-graft war.

Unfortunately, time is running out for the Buhari government. Recovery of looted funds and convictions by the EFCC and ICPC, more than in previous administrations, are not achievements that will outlive this government.

The pardon granted by the Council of State to former Governors Joshua Dariye and Jolly Nyame, the only ex-governors convicted for corruption under Buhari, remains in conflict with Buhari’s avowed commitment to the fight against corruption. So too is the recommendation by the Presidential Advisory Committee on Prerogative of Mercy, chaired by the AGF, that Francis Atuche, a former bank chief executive be released after just a year in jail, out of his six-year jail term for stealing N25.7 billion.

An uncompromising anti-corruption government does not spare banks that breach money-laundering laws and other financial regulations, as is the norm in Nigeria. Standard Chartered bank, for instance, paid $1.1 billion in fines to the US and UK authorities in 2019 for money laundering breaches, while BNP Paribas incurred $9 million in penalty in the US for rates-rigging in 2018.

President Buhari should reflect on all these issues and come to terms with the reality that on the score of his anti-corruption policies, he has clearly failed.

EDITOR’S NOTE: This post has been updated with the name of the incumbent minister who returned loot to government. We apologise for the initial omission.

NMA appeals to Nigerian govt to beef up security in FCT