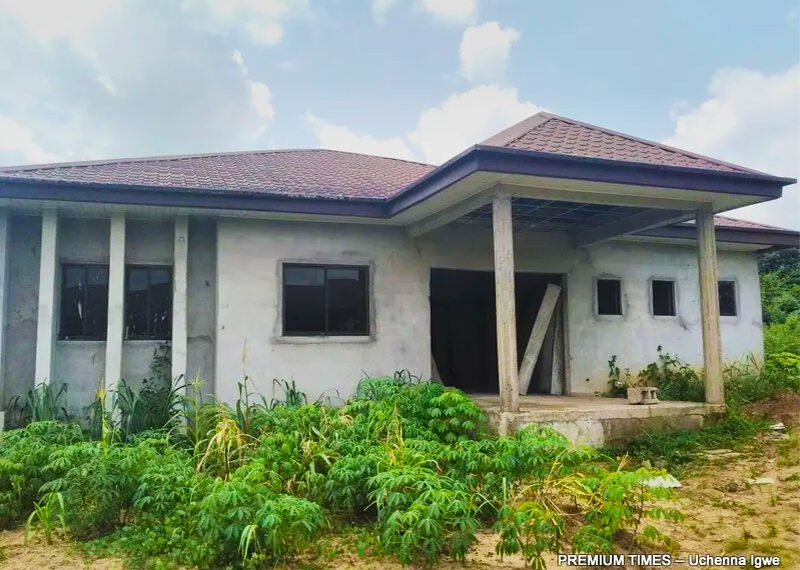 One of the buildings at the abandoned hospital

Poor funding of the health sector leaves negative impacts on Nigeria’s rising population, with the country accounting for 20 per cent of global maternal deaths, the world’s highest under-5 deaths, third highest global HIV infections and heaviest TB burden in Africa.

Peter Elijah was a senior secondary school 3 student when he was knocked unconscious by a hit-and-run driver while returning from school in 2018. The incident occurred in Akwa Ibom State in Nigeria’s south-south region.

A few hours later, he woke up to doctors battling to save his life.

His left leg was fractured in the accident and he had two surgical procedures.

“The doctor discharged me but said I should be coming to the hospital every week to treat and dress the wound,” Mr Elijah said.

But he could not keep the hospital appointments and the injuries on his leg festered.

“I didn’t have money for the transport fare to the hospital because I had spent all my savings on treatment and drugs,” he said, pulling up his trouser to reveal a smelly sore on his leg.

A round trip to the hospital cost Mr Elijah N1,200 – a rate which doubled in the wake of the pandemic in 2020. He said he would not have had “this hellish” experience if the hospital in his locality was functional.

For nearly two decades, the only public hospital in Ukanafun Local Government Area, where he resides, has been abandoned by the Akwa Ibom State Government, forcing the 580, 000 residents to seek medical care at the general hospital in Etim Ekpo, 35 minutes away, and other neighbouring areas, including Uyo, the state’s capital.

This is no news to Nigerians. Numerous abandoned health projects litter the country, denying Nigerians access to affordable health services.

Understaffed, ill-equipped and dilapidated, many others, partially running, are unable to cater for the growing population. Much of this has been blamed on the poor funding of the country’s health sector, as public expenditure on the sector has constantly fallen below the benchmark of 15 per cent of the national budget set by the African Union.

Like Mr Elijah, most Nigerians cannot afford the services of private hospitals and medical centres.

In 2001, leaders of African countries at a summit in Abuja, Nigeria’s capital, pledged to allocate at least 15 per cent of their annual budgets to the health sector, with the aim of improving healthcare in the region. This came to be known as the Abuja Declaration.

Despite being a party to this declaration, Nigeria has failed to honour it, findings by UDEME revealed.

UDEME is a social accountability project of the Centre for Journalism Innovation and Development (CJID), focused on holding the government at all levels to account.

Out of the N14.77 trillion federal government’s budget for 2022, only N724.9 billion (4.9 per cent) was allocated to the health sector. A breakdown of the allocation showed that only N3,587 was earmarked for the medical care of each of Nigeria’s 202 million citizens throughout 2022, that is, N298 monthly, N68 weekly and N9 daily – not enough for antimalarial drugs in a country with dangerous malaria statistics.

A former president, Olusegun Obasanjo, had described health funding in Nigeria as “one of the worst in the world.” Ironically, even Mr Obasanjo, who hosted the summit where the Abuja Declaration was made, never attained the benchmark until he left office in 2007. His highest allocation to the sector was 5.6 per cent of the budget in 2006.

So far, the highest allocation to the health sector by incumbent President Muhammadu Buhari is 4.75 per cent (N423.9 billion from N8.91 trillion) in 2019.

The Nigerian government has blamed its failure to meet the 15 per cent benchmark on paucity of funds and competing needs in other sectors of the economy.

The Permanent Secretary of the Federal Ministry of Health, Abdulaziz Abdullahi, said though desirable, the 15 per cent budget benchmark remains a tall dream.

“The 15 per cent budget for health is an aspiration and a set target that the country wishes to attain. However, many other factors militate against it. There are competing interests from different sectors such as education, agriculture, security, among others, and this means that the government must prioritise based on available resources,” he told The Guardian.

“The dwindling resources are driven by increased insecurity in many parts of the country and the recent COVID-19 pandemic, which virtually brought the economy of the world to a standstill. The fall in oil prices due to the pandemic has further reduced government revenue since oil is the major source of government revenue.”

While Mr Abdullahi partly blamed the COVID-19 outbreak for the non-attainment of the 15 per cent healthcare benchmark, findings outlined earlier in this report revealed that the health sector was being underfunded long before the pandemic.

The permanent secretary, however, revealed that the country will continue to rely on loans and grants from external sources, including the US government, Global Fund, World Bank and other international donor agencies, to augment the financing of its health sector.

Donor funding fell significantly after Nigeria was re-classified as a “Lower Middle Income” country. Since 2003, Nigeria has received almost $3 billion from Global Fund, while contributing $38.7 million to the fund as a global health partner. Recently, the fund disbursed 25 per cent of the $1.1 billion allocated to address key health issues in the country, in addition to the €50 million Nigeria received from the European Union (EU) in 2020.

Underfunding has a negative effect on the Nigerian population, which accounts for 20 per cent of global maternal deaths, the world’s highest under-5 deaths, third highest HIV infections in the world and the heaviest TB burden in Africa.

For Mr Elijah, his health challenge has cut his source of livelihood.

“I used to run a baking business. I did event decoration too. But this condition has stopped everything,” he said.