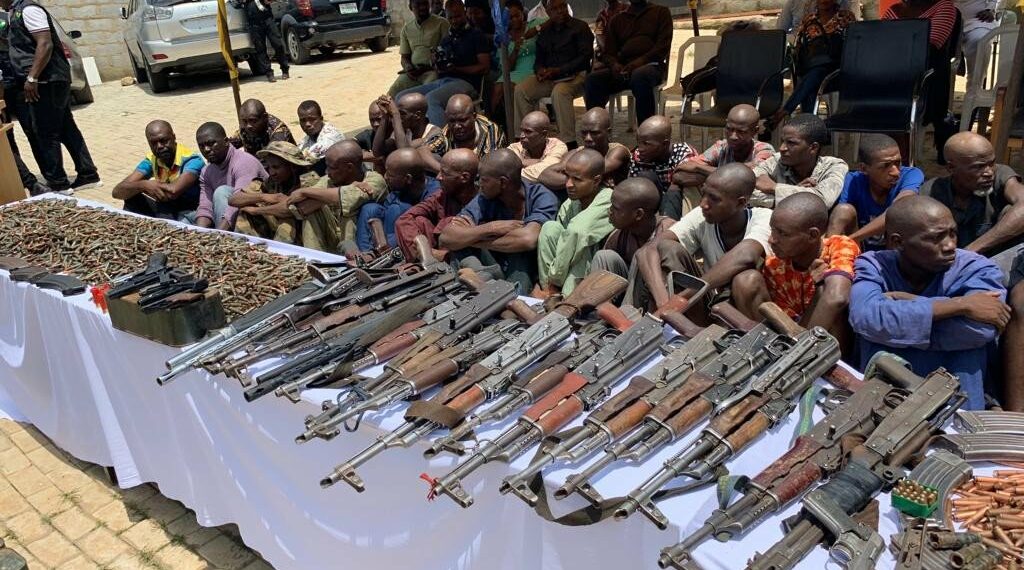 Bandits Arrested for delivering tons of weapons to groups in Nigeria.

Arms trafficking from Libya to Niger is back; Nigeria, others should be concerned

Countries in the Sahel need to collaborate to stem the tide of weapons flowing through Niger.

Arms and ammunition seizures by security forces in Niger’s Agadez and Tahoua regions between January 2021 and February 2022 helped dismantle trafficking networks in the country. This is positive, but what do the seizures say about the extent of the problem? Is arms trafficking from Libya to countries in the south on the rise again?

After the fall of Libyan president Muammar Gaddafi in 2011, southward arms flows from Libya rose significantly. In 2012, this enabled Mali’s Tuareg rebels and armed groups operating in the Sahel and Lake Chad Basin to acquire weapons and ammunition in a period of widespread regional turmoil.

The weapons, transported from the Libyan south-west by Tuareg fighters and traffickers, were moved along the Algerian and Nigerien borders. They were transported along the roads that cross the Agadez, Tahoua and Tillabéri regions, joining Mali via the Niger-Mali-Burkina Faso tri-border area and Lake Chad Basin via Niger’s Diffa Region.

But the military presence in northern Niger and the outbreak of Libya’s second civil war in 2014 saw arms flows to the south slow down. As demand for guns in Libya increased, Jihadist groups looked elsewhere – escalating attacks on army barracks in Burkina Faso, Mali and Niger to loot their arms and ammunition stockpiles.

Several drivers of insecurity in northern Niger facilitate the trafficking of Libyan arms. Vehicles of civilians and gold transporters have been attacked in the Aïr area. On 21 March 2021, armed bandits killed 137 people in various attacks in the Tillia commune. The violence prompted the population of the Agadez, Tahoua and Tillabéri regions to arm themselves in self-defence. Infuriated by the state’s failure to keep them safe, some civilians have explored the creation of militias for protection.

The high demand for arms and ammunition has given traffickers an opportunity to continue their lucrative trade. Stocks gathered in south-western Libya are sold to civilians (for self-defence) and armed groups in Niger, Mali, Burkina Faso and Nigeria. The weapons are transported in 4×4 vehicles, suitable for the desert’s sandy tracks.

The various flows enter Niger from the Libyan border, using tracks that circumvent or cross Passe de Salvador. They follow the old trans-Sahel trading routes, avoiding surveillance systems put in place by the United States and Niger in recent years. Vehicles carry weapons – often hidden under other goods – through a corridor heading towards Agadez, Tassara or Tchin-Tabaradene, to reach Mali.

The transport of weapons to Nigeria follows two routes. One heads east through the Dirkou area towards Diffa or Tasker (Zinder region) and the other to the centre through Agadez. The latter is split into three routes: to Aderbissinat and Zinder; to Abalak, Tahoua and Birni Nkonni; and the Madaoua, Guidan Roumji and Maradi route.

Institute for Security Studies (ISS) research has found that some traffickers store arms and ammunition in caches across Agadez and Tahoua before selling them through their dealers. These dealers unload them in the Tillabéri, Maradi, Zinder and Diffa areas to various buyers, including terrorist groups and cross-border bandits.

Other networks use back routes to transport shipments to Mali’s Menaka region, where they trade with those involved in violence and organised crime in the Liptako-Gourma region. ISS research found that in March, weapons were delivered to this area where fighting is ongoing between the Islamic State in the Greater Sahara and the coalition made up of the Movement for the Salvation of Azawad and the Imghad Tuareg and Allies Self-Defense Group.

The new arms flow from Libya is not as substantial as those preceding the country’s second civil war, which ended with a ceasefire in October 2020. However, a solution to Libya’s current crisis could increase trafficking to neighbouring countries as the local need for weapons decreases.

The excess of arms and ammunition accumulated during the 2014-20 civil war could feed trafficking networks and be transported through Niger to countries in the Sahel, Lake Chad Basin and West African regions. This would supply various non-state armed groups and increase regional instability.

Niger’s responses to arms trafficking must be strengthened to address this risk. These include the National Commission for the Collection and Control of Illicit Weapons and reinforcing border patrols in northern Niger. However, a regional initiative would be better suited to preventing a southward resurgence of weapons flows if Libya’s conflict ends. Such an initiative should include better military and security cooperation between Niger, Algeria and Chad, and joint border patrols.

At the same time, the Economic Community of West African States should step up its efforts to combat small arms proliferation in the region. For their part, international partners could provide better-tailored assistance, including intelligence, air support and training.

This article was produced with the support of the governments of Denmark and the Netherlands.