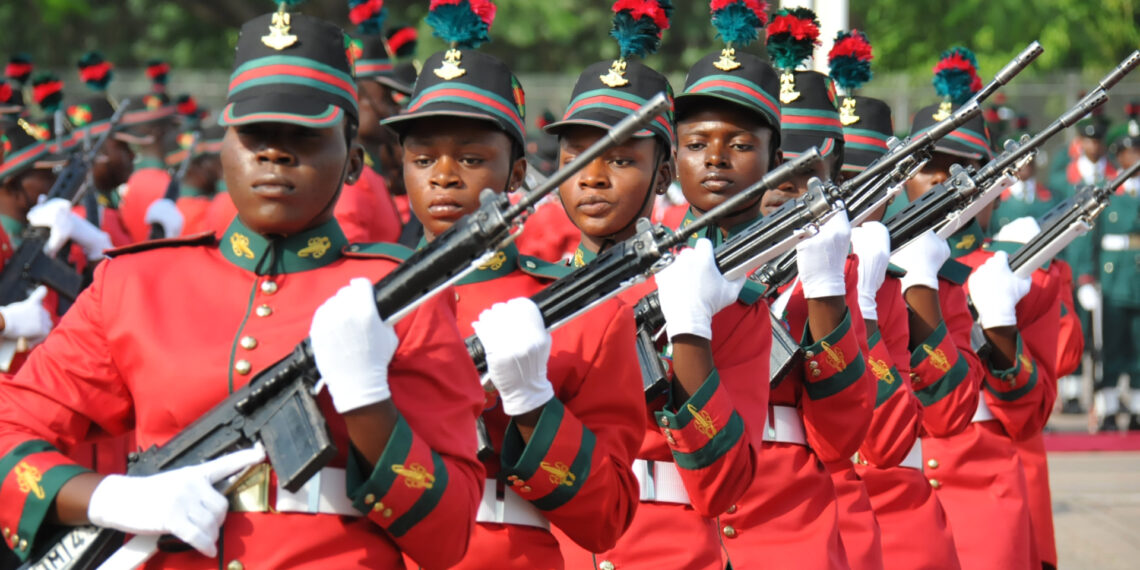 File photo of the Presidential Guard in a parade (Photo Credit: Defense Nigeria)

On Monday, the government officially shut the Federal Government College, Kwali, in the Kwali Area Council of Abuja after terrorists attacked a community near the school.

Gunmen on Friday attacked some officials of the 7 Guards Battalion of the Nigerian Army Presidential Guards Brigade.

Two of the slain personnel were officers, including a captain and lieutenant, while the remaining were soldiers.

According to a source within the army, the main aim of the terrorists is to attack the Nigerian Law School in Bwari and they may have already camped in the area.

The Nigerian army has yet to officially react to the attack. Army spokesperson Onyema Nwachukwu did not pick up or return calls to his phone. But different intelligence sources had told PREMIUM TIMES that the government was aware of plans by terrorists to attack some places in the capital and security had been increased around the city.

On Monday, the government officially shut the Federal Government College, Kwali, in the Kwali Area Council of Abuja after terrorists attacked a community near the school.

The attack on the Guards Brigade, whose duty is to protect the president, comes a few weeks after terrorists launched a similar attack on a presidential convoy in Dutsinma, Katsina State.

On the same day,  terrorists invaded the Kuje prison in Abuja and freed hundreds of inmates, including Boko Haram suspects.

One of the terrorists in the video threatened that his group would abduct President Buhari, Kaduna State Governor Nasiru El-Rufai and other prominent Nigerians and destabilise the country if their demands were not met.

The terrorists also threatened to kill and sell some of the remaining Abuja-Kaduna train passengers in their custody.

“This is our message to the government of Nigeria and just as you have seen these people here, by God’s grace, you will see your leaders; your senators and governors will come before us. These ones you are seeing here, we will keep some as our slaves and sell them off just as our Imam told you in the past.

“Just like the Chibok girls that were sold off, we will equally sell these ones as slaves. If you don’t adhere to our demands, we will kill the ones we need to kill and sell the remaining. By God’s grace, El-Rufai, Buhari, we will bring you here,” the terrorist said in the video.

Until recently, the FCT had enjoyed relative peace, compared to some neighbouring states such as Niger and Kaduna where terrorists, locally called bandits, operate almost on daily basis.

Despite the deteriorating security situation, the Buhari government has repeatedly insisted that security has improved under the president.