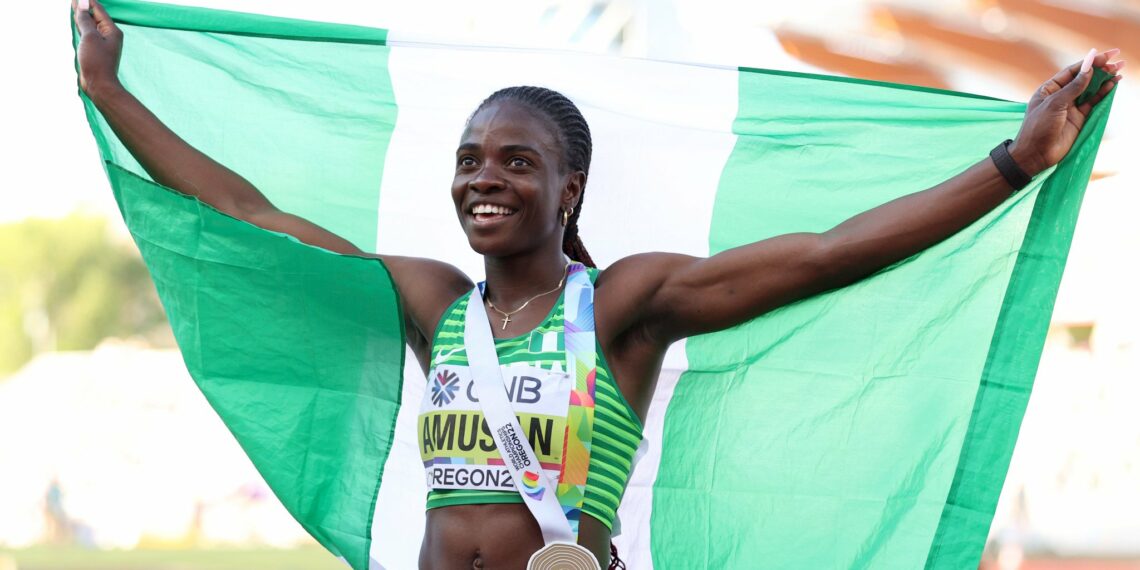 Nigeria's Tobi Amusan has won a Gold medal in the Women's 100m Hurdles at the World Athletics Championships, after breaking the world record with a time of 12.06 seconds. (Photo Credit: World Athletics on Twitter)

On November 8, 2016, at about 7 a.m Texas time, Oluwatobiloba Amusan wrote on Twitter, “Unknown now, but

I will be UNFORGETTABLE … I will Persist until I SUCCEED ….”

In 2017, Amusan told Making of Champions, “at this moment, Kendra [Harrison] owns the record and I don’t have any but she doesn’t have two heads. It will be good for me to run a PR or break the world record if she is not careful–just kidding…”

In 2020, Amusan mused on Twitter, “My coach taught me that when I walk into a room full of my rivals to look like I own the damn world record. She always reminds me that I’ve practiced hard to trust myself and translate that aggressiveness onto the track.”

Two years later, there is no kidding about the fact that Amusan is a world champion and a record breaker. If not for a tailwind of 2.5m/s, we would talk about a historical event that may never be replicated. One thing that comes through is that Amusan always believed she could become the best in the world in the 100m Hurdles, and eventually, her belief became a fact.

Amusan became Nigeria’s first-ever world champion and a world record holder in athletics on July 25 at the Hayward Field in Eugene, Oregon, smashing the former record held by Jasmine Camacho-Quinn.

It is not surprising that one of the trending searches throughout Monday was ‘who is Tobi Amusan’?

Tobi, as she is popularly called, is the last child of three siblings. Oluwatobiloba Ayomide Amusan was born on April 23, 1997, in Ijebu Ode, Ogun State, Nigeria, to two school teachers.

With her father and mother being school teachers, it is not strange the strict upbringing Amusan had, growing up as a little girl.

For Amusan’s father, reading and taking one’s studies seriously is the tested and proven way to success and stardom not running around the stadium in the name of training.

But luckily for Tobi, her mother was a bit liberal and was ready to accommodate her little baby’s love and interest in sports. As long as it does not impede her academics.

“My life centred around going to school, sleeping, eating, and reading books, the same cycle that I took into my later life later,” Amusan told worldathletics.org in an interview conducted in 2020.

We cannot describe her as an athletic outlier because both her parents were athletes. Her father played volleyball for Ogun State while her mother was a sprinter in her tertiary school days, but both were cautious in allowing their daughter free rein at athletics.

Recounting a story told by her mother to the Headliner, Amusan said her mother got injured and was abandoned by the authorities and thus she was cautioned to not put all her eggs in the athletics basket.

That is a common story in Nigeria’s sports circles. Administrators are friends when the going is good but quickly evaporate when the athletes get injured or fall on hard times. Fortunately, her mother became her greatest supporter while her father insisted on schooling before an athletic career.

And like many Nigerians, Amusan started her sports journey as a football player and she just loved running around. They took her to a track coach and in competing against supposedly coached athletes, she came first. That was how her athletics career took off in Ijebu-Ode.

Amusan started winning medals at local competitions, but she actually came into the national consciousness when she won a silver medal at the 2013 African Youth Championships in Warri.

The likes of Ese Brume and Divine Oduduru were all winners from that continental meet held in the oil-rich city.

Amusan told the World Athletics when she was replaced as a member of Nigeria’s 4x100m relay squad at the trials for the 2014 African Youth Games that she figured she had nothing to lose and entered the hurdles.

It proved to be a smart decision, as she won that and earned silver at the African Youth Games in Botswana.

Then followed a trip to Ethiopia in 2015, where she won African U20 gold, followed by a breakthrough victory at the All-African Games in Brazzaville, Congo.

“It was one of the biggest milestones of my career; winning that championship set me up for who I am today,” she said.

It was not all smooth for Amusan as she had her down moments in her early days as an athlete.

One of such was at the World Athletics U18 Championships in Donetsk, Ukraine, where Amusan was disqualified for lane infringement during the 200m semi-finals.

But instead of being shattered by the unfortunate incident, what transpired afterwards turned out to be a big motivation.

Goodluck Jonathan, the then President of the Federal Republic of Nigeria, hosted the Nigerian contingent to the Championship to dinner, and that proved vital in toughening Amusan

“Back then I thought by competing in track I’d get to meet the president all the time. I thought ‘if this is true, I’m going to take track seriously,” Amusan recalled in an interview.

She made it to the 100m Hurdles semi-final at the 2016 Rio Olympics; came fourth at the World Athletics Championships in 2019; was fourth again at the 2020 Olympics before shattering the world record in 2022 in the United States.

After coming fourth in the 100m Hurdles final at the Tokyo Olympic Games, Amusan revealed she was taking a lot of lessons from Tokyo. “Physically, I think I was ready, but mentally I wasn’t. I think my mentality let me down.”

Twelve months later, in June 2022 in Benin at the All Nigeria Championships, which were the qualifiers for the World and the Commonwealth Games, Amusan broke the African record. She revealed her mental strength had improved in the execution of her races. It was a sneak preview of what was to come in Oregon.

After shattering the record on Sunday, Amusan said track-side, “You know, it’s been God.

“I came in with a mindset of you know of relaxing and executing and not stressing the process and focusing on myself as my coach always told me and everything will play out and I am thankful to the man above as I did just that today.”

That journey could not have been possible without her mother, who came to watch her in Benin in June, where she broke the African record, and her coach, the Jamaican Lacena Golding Clarke, under whom she has been training since 2016.

“Amazing. I am elated,” Amusan revealed in the post-race interview. “It’s been a journey, and I am thankful to God for keeping me healthy. I am more thankful because to come out here with a win and a world record is crazy.

“The field was hot, and the goal was to execute and make it to the final, and seeing the world record was like yes but I had to keep my composure for the final and I think I handled that pretty good, all thanks to God.”

In 2016, Amusan received a scholarship to attend the University of Texas, El Paso (the same institution where Blessing Okagbare attended)

Through hard training, Amusan lowered her personal best from 13.10 to 12.83 and she never looked back since.

As the progression continued, the question many kept asking was when she would break the 12.44 African record held then by her compatriot, Gloria Alozie.

“Unto HIM, who has been my pillar (God); it will happen in HIS timing! No pressure whatsoever.” Amusan told PREMIUM TIMES in 2020.

Two years down the line, Amusan has not only broken the African record twice, but she also has added a world record with her feat in Oregon

Finally, the little girl from the dusty fields in Ijebu-Ode is a world champion, a cynosure of all eyes around the world, and a proud Nigerian.

If there is one thing that stands Amusan out amongst her peers, it is her self-belief and philosophy that with God, all things are possible

The young girl from Ijebu Ode was a virtual unknown six years ago when she wrote the tweet at the beginning of this article. She needs no introduction around the world again, at least in the athletics circles for many years to come.

After the disappointment in Tokyo, Amusan dusted herself off and took the 2021 Diamond League title in September. Screaming after the race, draped with the Nigeria flag, Amusan said, “I did it”. It was a great way to end the season.

After fourth-place finishes at the 2019 World Championships in Doha and last year’s Tokyo Olympics, Amusan finally made it, not just onto the podium, but to the top of the medal stand.

In seven years, she shaved 1.77s off her personal best times to become Nigeria’s first-ever world champion and record-setter. But Sunday’s feat is not her first because, in September 2021, she also became the first Nigerian to win the Diamond League.

Funke Akindele: Enough of the tantrums against the girl-child’s dreams, aspirations, By Adeshola Komolafe