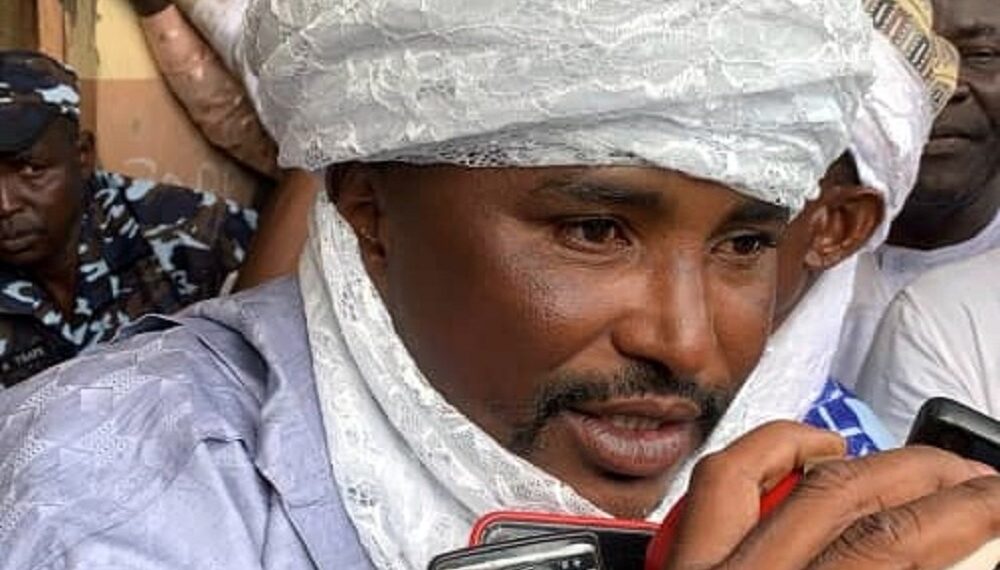 Wanted terrorist kingpin, Adamu Yankuzo, who is also known as Ada Aleru, the Sarkin Fulani of the emirate speaking after coronation.

Inside story of how Zamfara Emir turbaned notorious terrorist Aleru

The ceremony was almost cancelled but for a veiled threat by Mr Aleru.

On Saturday the Emir of Yandoton Daji, Aliyu Marafa, made a wanted terrorist, Adamu Yankuzo, who is also known as Ada Aleru, the Sarkin Fulani of the emirate.

The well-attended ceremony confirms PREMIUM TIMES’ exclusive report about the decision to make Mr Aleru, who is notorious for his ruthlessness and was once declared wanted by the police, a chief.

Mr Aleru is the leader of a terrorist militia that operates in parts of Zamfara and Katsina states. Thousands of people have been killed in the two states and other neighbouring states by terrorists.

During the ceremony, the emir said he was making Mr Aleru a chief to ensure a lasting peace in the area.

After his inauguration as a chief, Mr Aleru told the crowd of people that gathered to witness the ceremony that he would do whatever it takes to prevent attacks on communities in the emirate.

While he accused some unnamed persons of enriching themselves from the attacks in the area, he said he and his militiamen were not criminals but freedom fighters.

Sources told this newspaper that the ceremony billed to take place at 11 a.m. was postponed following the public outcry after PREMIUM TIMES’ story was published on Friday.

The ceremony was attended by the Zamfara State Commissioner for Security and Home Affairs, Mamman Tsafe; security advisor to the governor, Abubakar Dauran; Tsafe Local Government Chairman, Aminu Mudi, and representatives of the information commissioner, district heads and other traditional title holders and government officials.

Sources who asked not to be named told this reporter that after PREMIUM TIMES’ exclusive was published on Friday, the emir of the town and the chairman of the local government threatened to cancel the ceremony.

“The emir and the chairman (of Tsafe) were angry with the story in the media by your newspaper,” a village head who earlier confirmed the date to PREMIUM TIMES said. “Guests were already seated when the chairman called the council for a meeting in Tsafe and that was how the ceremony was put off.”

He said before the emir left the town for Tsafe, he ordered that the ceremony be suspended until further notice.

The village head, who asked not to be named for fear of attacks, said they faced a lot of pressure from the “government side to suspend the ceremony.”

“After the meeting in Tsafe, permission was sought from the state government by the local government sole administrator, Aminu Mudi, on the importance of going ahead with the ceremony.

“After the chairman (sole administrator) was convinced by the emir, he called Gusau (possibly the state governor) and explained the situation after which it was agreed that the ceremony should go ahead,” the village head said.

The emirate council’s secretary, Bello Yusuf, told PREMIUM TIMES that there was a meeting at the Local Government Secretariat Council Hall before the dignitaries proceeded to Yandoto town.

PREMIUM TIMES learned that the emir decided to continue with the ceremony following a veiled threat by Mr Aleru, who was already at the palace when he learnt that the ceremony was being put off.

The palace secretary, Mr Yusuf, confirmed the bandits’ leader was angry but said Mr Aleru did not make any threat.

But a security source, who attended the ceremony, said the emirate council knew what was to come hence their insistence that the ceremony should go ahead as planned.

“Even in their Tsafe meeting, the security affairs commissioner was informed of the threat made by Aleru and they knew if the ceremony was cancelled, it would be a vicious circle of attacks. Don’t forget that he didn’t ask to be turbaned, it was the emirate that even reached out to him so, how could they even contemplate cancelling it?”

He said Mr Aleru had slaughtered about 17 cows and several rams for the ceremony and that he had already had a mini event to celebrate the coronation in a village around Munhaye.

Why other militia leaders didn’t attend

Residents had expected that other militia leaders in the region like Ali Zakwai, Bello Turji, Danboko, Sanata, Isuhu Yelo, Damina, and Mai Shamuwa would attend the ceremony but they stayed away.

While some of the militia leaders like Bello and Danbokolo were said to have withdrawn from the party at the last minute, others were told the ceremony had been put off and so decided not to come.

“Most of them were waiting in some communities around the town waiting for words from their boys,” the security source said. “When the ceremony was suspended around 9 a.m., their boys that were already in Yandoto informed them which led to many of them going away. But most of them had their boys around until after Asr prayer (4pm) when Aleru entered the town.”

Why we coronated him – Palace

Speaking to PREMIUM TIMES through the phone, Mr Yusuf said the decision to honour Mr Aleru had nothing to do with politics or connivance.

He said the emir is a peace-loving person who has always explored ways of ensuring peace.

“He (Emir) has always been an advocate for peace. Contrary to rumour, Aleru didn’t beg for this title,” Mr Yusuf said.

He said the decision was taken after a peace meeting in Mada town earlier this year.

“After that particular meeting, Aleru and his boys came here to greet His Highness and expressed commitment to stop attacking people. He didn’t give any conditions, he said he was ready to extend the peace accord to other places. When he left, one of the council members advised that even with the commitment, the emirate should explore ways of holding Aleru and other bandits and that was how we came up with the decision to make him the Sarkin Fulani,” he said.

“We couldn’t have done that without approval from the state government. We did it with the best of intentions and because we’ve seen the commitment so far. Our people can now go to the farm and nothing happens to them. It used to be very difficult for everyone. Nobody was safe from the bandits’ attacks but we hope that the peace we are enjoying now will continue,” he said.

He said the conferment of a traditional title on a notorious kidnapper and cattle rustler has “vindicated his stand that some of the monarchs have cases to answer.”

Mr Getso said a committee report indicted several traditional rulers in the state as part of the problems.