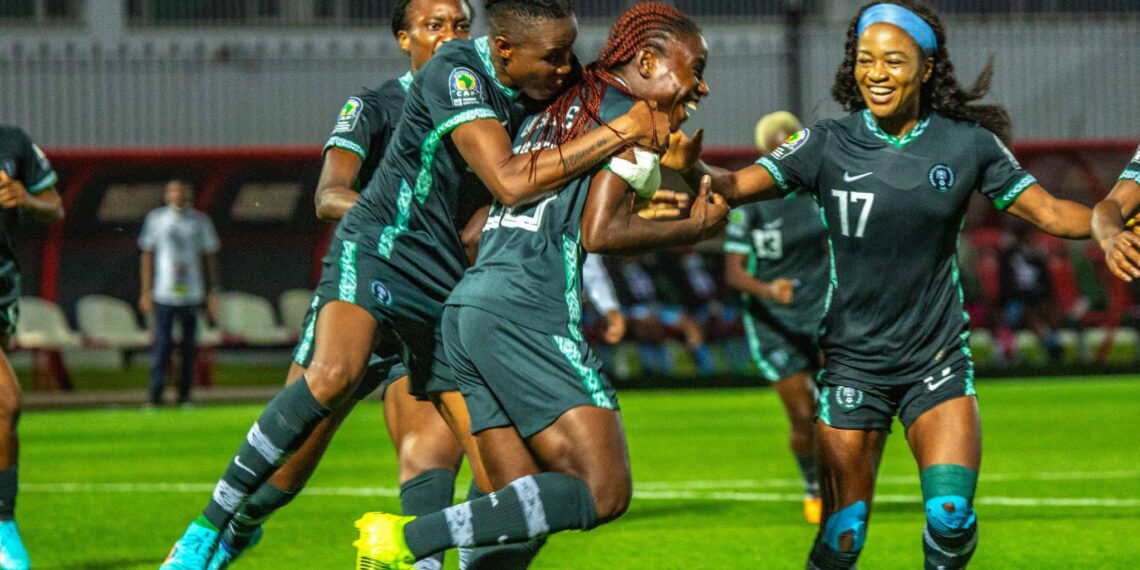 The Nigeria women’s football team, the Super Falcons, are through to the quarter-final stage of the ongoing Women’s Africa Cup of Nations in Morocco.

The Super Falcons sealed their place in the last eight following a 4-0 thrashing of Burundi at the Stade Moulay Hassan in Rabat on Sunday night in their final group game.

Rightly dubbed a battle of David and Goliath, the Super Falcons put up a dominant display on Sunday with three first half goals and one more in the second 45 minutes.

After returning to winning ways on Thursday against Botswana, the Super Falcons continued from where they stopped in Sunday’s final group game.

Coach Randy Waldrum’s ladies came out smoking right from the blast of the whistle and almost broke the deadlock in just two minutes.

Ifeoma Onumonu who broke the deadlock in the game against Botswana had the first go at goal in Sunday’s tie but she hit the ball off target.

The Super Falcons had a flurry of chances afterward but could not break the deadlock until the 23rd minute when the Burundi goalkeeper Jeanine Irakoze brought down Rasheedat Ajibade in the box and gifted Nigeria a penalty kick.

The blue-haired Ajibade dusted herself to take the awarded penalty kick and she shot Nigeria into the lead in the 25th minute.

That opening goal was all Nigeria needed to rattle the Swallows as they conceded a second goal just three minutes after conceding the first. Peace Efih put the ball in the net to make it 2-0 as she benefitted from an assist from the in-form Ajibade.

ALSO READ: WAFCON: What Oshoala’s absence should mean for the Super Falcons

The Central Africans had barely caught their breath when Uchenna Kanu poked the ball to the empty net to make it 3-0 just before the half-hour mark off another assist from Ajibade.

The Super Falcons took their three-goal lead into the second half and continued from where they stopped with another goal from Kanu just after the restart.

Though the Super Falcons had a couple of other chances in the second half, they settled for a 4-0 win which saw them qualify for the quarter-final as the runners-up in Group C.

South Africa made it three wins in three games to finish top in Group C with the maximum of nine points after beating Botswana by a lone goal on Sunday night.

The quarter-final matches will be keenly contested as the four semi-finalists in this competition will be flying Africa’s flag at the 2023 FIFA Women’s World Cup to be co-hosted by Australia and New Zealand.