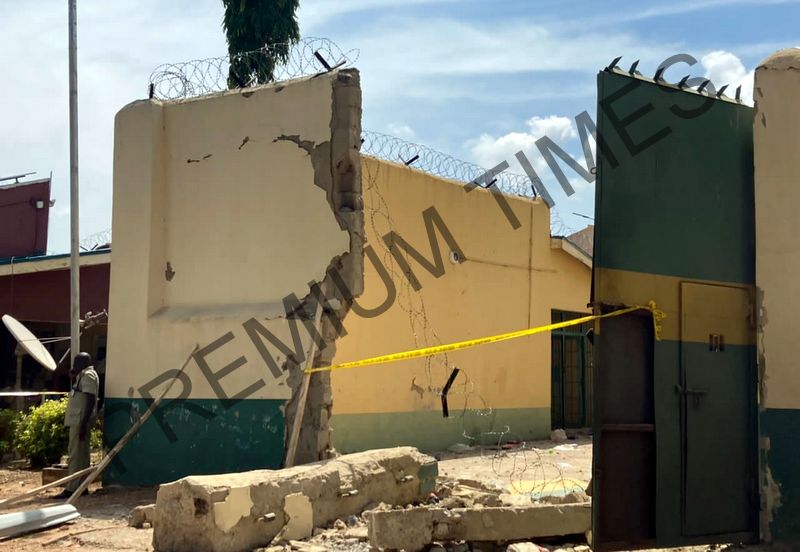 More than 30 armed officials were on ground during the Tuesday attack on the Kuje Custodial Centre in Nigeria’s Federal Capital Territory, PREMIUM TIMES learnt from officials briefed on the matter.

Shortly before midnight on Tuesday, the Kuje facility came under attack in yet unclear circumstances that led to the escape of dangerous criminals, including apprehended Boko Haram terrorists.

The terrorists attacked the Kuje maximum prison with “very high-grade explosives,” according to Shuaib Belgore, permanent secretary of Nigeria’s Ministry of Interior.

About 994 inmates fled during the attack. PREMIUM TIMES understands that 115 refused to escape while 445 have been recaptured or have turned themselves in at police stations.

An official said 580 inmates are back in the facility as of Thursday and 414 of the escapees are still missing. Seven inmates have been taken to hospital following injuries they suffered during the attack, the official said.

Umar Abubakar, a spokesperson for the Nigerian Correctional Service, said officials will “track all fleeing inmates and return them to custody,”

This newspaper reported how the attackers used three bombs and forcibly took control of the entry and exit points of the facility.

Later on Wednesday, President Muhammadu Buhari visited the prison where senior officials showed him around the facility. He then tweeted that he was “saddened” by the attack and “disappointed” with Nigeria’s intelligence system.

“How can terrorists organise, have weapons, attack a security installation and get away with it?” the president asked.

Communities lying outside the Abuja city centre have increasingly become prone to violent crimes, including abductions believed to be carried out by terrorists, often called bandits, operating in the Northwest and parts of the Northcentral, including the federal capital.

Boko Haram terrorists who attacked Kuje prison have waged a deadly insurgency in the country’s northeast for over a decade. The rebels have taken control of communities in Niger State while ISWAP has claimed attacks in Kogi State, another neighbouring state in the North-central.

Interior minister Rauf Aregebesola said the Kuje attack occurred despite the fortification of the prison with armed security operatives.

PREMIUM TIMES has now learnt that 10 armed officials of the Nigeria correctional centre were on the ground during the attack.

Five members of the Mobile Police Unit (Mopol) 21 and five from Mopol 50 were also on the ground, according to an official with knowledge of the matter.

Mr Magashi, the defence minister, told journalists security officials on the ground did “their best” to prevent the jailbreak.

However, Senate President Ahmad Lawan said during his visit to the prison that some security officials at the facility may have been compromised for the attack to be that successful. He called for a thorough investigation of the incident.

When our reporters visited Wednesday afternoon, bullet shells lay scattered around the prison premises while security agents combed nearby bushes in search of escapees.

Armed groups have carried out several jailbreaks around the country in recent years, causing massive release of inmates.

Last April, more than 1,800 inmates escaped from Owerri prison in south-east Imo State, with armed men using explosives to blast through walls after a gun battle with guards.

In November, armed criminals killed 10 persons and freed 252 inmates in an attack on the Jos Medium Security Custodial Centre.

Prior to that, 837 inmates awaiting trial escaped from the Abolongo Correctional Centre in Oyo Town, when gunmen attacked the facility in October.

This year, an inmate on death row and two others awaiting trial for armed robbery escaped from a prison in Ilorin, North-central Nigeria.

At least 4,307 inmates have escaped from Nigeria’s prisons since 2017, TheCable reported based on compiled media reports.