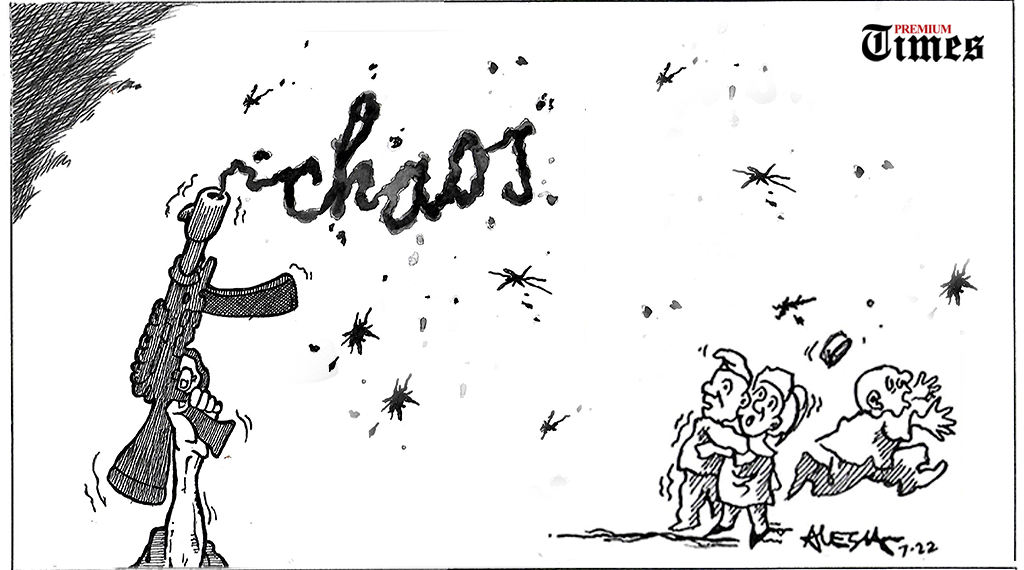 Illustration for Zamfara insecurity: Governor’s call to arm, a recipe for anarchy

President Buhari should decode the augural message inherent in Matawalle’s bohemian perspective in tackling the State’s insecurity by ending his imperviousness to change, and allowing for the creation of state and community policing.

Peeved by an endless cycle of mass killings, kidnappings and the sacking of villages by bandits in Zamfara State, the governor, Bello Matawalle, has urged citizens to bear arms to defend themselves. This is ominous. It is an act of desperation, which stems from the loss of confidence in Nigeria’s security machinery. But as bad as the situation is, a resort to self-help is a recipe for anarchy in an environment where law and order have broken down. It is a wake-up call to President Muhammadu Buhari and his security chiefs to re-strategise and chart a new course that will restore normalcy, not just in the state, but in all parts of Nigeria.

With carnage and lamentations becoming a daily ritual, the State government directed the State’s Commissioner of Police, Ayuba Elkana, to give gun licenses to 9,500 residents. It has already enforced a raft of measures to counter the activities of bandits. These include closure of markets in Mada, Wonaka and Ruwan Bore districts in Gusau Local Government Area and Yandote Emirates; banning the use of motorbikes and selling of fuel in these areas. Security personnel have been ordered to shoot on sight any suspected bandit. An Intelligence Centre has also been set up, while the committee on Prosecution of Banditry Related Offences has been reconstituted. These latter measures tick all the right boxes.

Indeed, life for rural dwellers in the State has become Hobbesian: farmers are regularly killed, abducted and access to their farms blocked. Women are raped, children orphaned, shops are routinely looted, and poor villagers are levied up to N5 million ransom with deadlines to pay, or they face fatal consequences. The number of internally displaced persons has spiked in Zamfara State, with serious humanitarian challenges. In June, 40 traders returning from Sokoto were abducted. Rankled by government’s abysmal failure in protecting lives and property, protesting residents in Tsafe Local Government Areas blocked the major highway leading to Gusau, the State capital, from Zaria, for five hours, in October 2021. In January, protesters in Shinkafi Local Government Area attacked the palace of the Emir and homes of public office holders for the same reason.

No doubt, the governor means well in his seemingly populist drive to provide security, but it will not materialise with Police Commissioner Elkana’s rebuff that, “I have not received any directives, and also, there is a ban on firearms licence, and we don’t give licence…Let me see the directive first before I can comment. I have not seen the directive, so I cannot comment on compliance.” The governor’s call for the licensing of residents to bear arms was also dismissed by the Chief of Defence Staff, General Lucky Irabor.

Besides, the plan runs against the grains of the 1999 Constitution, as amended. Section 214 (1) that established the Nigeria Police Force states that, “…subject to the provisions of this section no other police force shall be established for the Federation or any part thereof.” Yet, while there is no express constitutional provision for the creation of police forces in the states of the federation, the same 1999 Constitution is being interpreted variously by the different regions and states in the country with the setting up of quasi-police and vigilante units that perform some degree of police functions, such as Amotekun, Ebube Agu, etc.

This lack of explicit constitutional power incapacitates any governor in setting up a well-trained and heavily armed security outfit to fill the void in the effective policing of rural communities that are more vulnerable to banditry. The presidential ban on the licensing of firearms to residents is also debilitating. But even if the police were to grant these gun licenses, only Dane guns would be permissible, which cannot match the AK-47 and GPMG rifles, rockets launchers and other sophisticated assault weapons that the bandits wield.

Allowing arms in wrong hands explains why Nigeria is now a killing field. It began in a particular region in the South in the build up to the 2003 general elections, when youths were recruited as thugs and armed for electoral victory at all cost. As polls ended, they were abandoned; and with no jobs, the guns were deployed to other uses – kidnappings, robberies and assassinations, which spread like wildfire across the country. So, if the Matawalle proposal is allowed, it might mutate into another monster. The ambush and killing of 22 soldiers by gunmen in Niger State a few days ago, demonstrates further how the nation is already on a kamikaze mission. The situation should not be worsened with more arms in private hands.

However, we should make no mistake about it, Matawalle’s audacious move sits well in some quarters due to anger and frustration, evident in the response of Governor Rotimi Akeredolu of Ondo State, whose native town was invaded by gunmen who killed 40 worshippers at St Francis Catholic Church, Owo, last month. But he lamented that the directive will be “stifled by existing federal arrangement.” In its review of the situation, the Southern and Middle Belt Leaders Forum warned that the resort to self-help might soon be the only option available to Nigerians if this orgy of violence and mass killings is not tamed.

So daring and evil-minded are the bandits in Zamfara State that they shot down a Nigerian Air Force (NAF) fighter jet in July 2021. The attack revealed the extent to which they can go in challenging the Nigerian state. But the security collapse in the State predates Matawalle’s tenure. His immediate predecessor, Abdullazizi Yari was so riled by it that he called on President Muhammadu Buhari to declare a state of emergency on his domain, even if it involved his resignation as governor. A former Commissioner of Police in the State, Usman Nagoggo, once stressed that no fewer than 6,319 people were killed by bandits in Zamfara State in 2019 alone. Again, Amnesty International records that at least 371 people were killed in the State in 2018, and “at least 238 of those killings took place after the deployment of the Nigerian air force.”

The state’s security conundrum is one of the upshots of Nigeria’s centralised policing system, which leaves large swathes of territory under the control of bandits. With a little above 300,000 police personnel, more than half of whom are attached as guards to very important personalities and public institutions, the larger society is left at the mercy of criminal gangs. As often observed, a country of about 200 million people cannot be well secured with the present police workforce. A multi-layered policing model deployed in jurisdictions like the United States, Canada, Australia and other federations is the way to go. The United Kingdom that is not a federation has “48 civilian police forces” and “43 territorial police forces in both England and Wales” according to the UK House of Commons Library.

President Buhari should decode the augural message inherent in Matawalle’s bohemian perspective in tackling the State’s insecurity by ending his imperviousness to change, and allowing for the creation of state and community policing. It is imperative for him to note that all crimes are local. The pattern of killings demonstrates that far-flung communities where security presence does not exist are usually easy targets. Amnesty International Nigeria attested to this fact in its 2018 survey. It stated that, “Amnesty International visited communities in five local government areas of Zamfara State – Zurmi, Maradun, Maru, Anka and Tsafe. Although security forces were present in the state capital Gusau, researchers saw soldiers and air force personnel in only two of the villages they visited, Birane and Bagega.”

Every trick in the book seems to have been exhausted in a bid to neutralise the bandits. Between November 2017 and July 2018, the president ordered the deployment of troops to Zamfara thrice. In March 2021, the State was placed under a no-fly zone radar, and in September that same year, telecommunication operators shut down operations in an effort to deny the bandits service. Yet, the State remains marooned in the cauldron of insecurity. Therefore, devolving policing in Nigeria is a remedy that can no longer be avoided. The inhibitive Section 214 (1) of the Constitution has become anachronistic and overdue for amendment. It is for this reason that the 2014 National Political Conference recommended state policing. The ruling All Progressives Congress (APC), too, under whose platform Mr President came to power, had it as pact with Nigerians. But Buhari has demurred on this since he assumed office, thus paving the way for insecurity to spiral out of control.

As Matawalle belatedly realised, the policy of appeasement of non-state actors does not work. Going inside the bush to seek a peace pact with them and the granting of amnesty, which they eventually jettisoned, gave them a false sense of triumph over the state. This gaffe should not be repeated. Therefore, the newly created Intelligence Centre and the reconstituted panel for the prosecution of banditry related offices must act with a sense of urgency on cases brought before them. Counter-insurgency is intelligence-driven. Criminals who have made life hellish for the people deserve to be arrested and prosecuted. Their civilian and security personnel collaborators should not be spared either. The punishment for a traditional ruler, found complicit in the heinous activities of these bandits, as is the case in the State, is not dethronement, but trial and conviction. A strong point needs to be made that our society is governed by the rule of law and order.

Ultimately, a solution to Nigeria’s porous northern borders with Niger Republic, Chad and other countries in the Sahel holds the key to peace in Zamfara State. The flow of illicit firearms streaming into Nigeria through our land borders must be stopped. Consequently, for effectiveness and an enduring result, Matawalle should constantly engage President Buhari on this and construct a formidable security architecture in collaboration with Sokoto, Kaduna and Katsina – all states in the North-West, also hobbled by waves of banditry and terrorism.

Three men in a tub, and all out to sea, By Uddin Ifeanyi