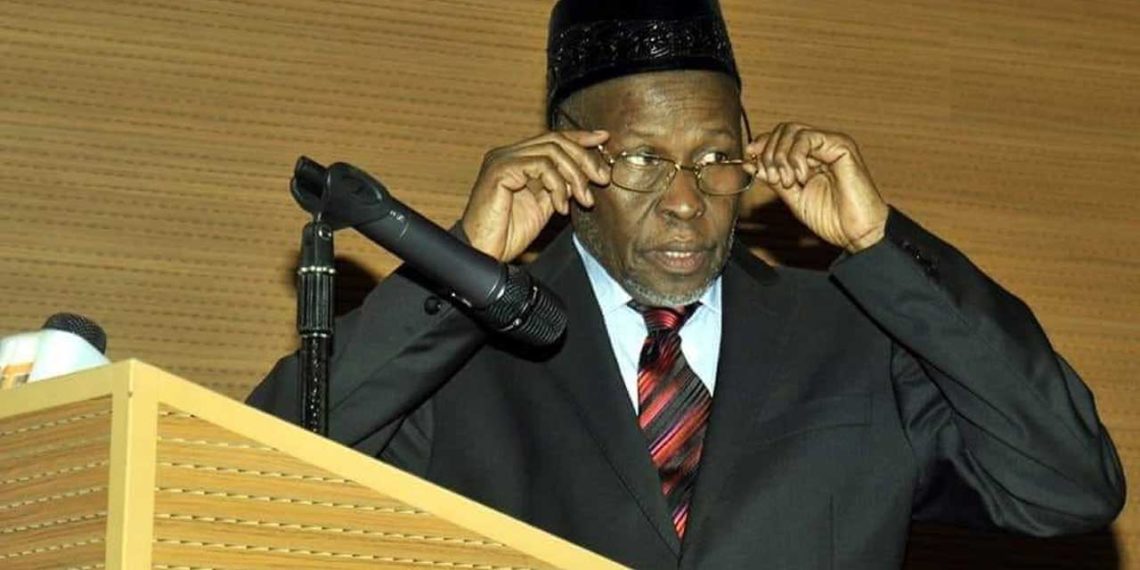 Senate to continue probe on corruption allegations against ex-CJN

Tanko Muhammad resigned on Monday as CJN barely a week after 14 justices of the Supreme Court accused him of corruption in a leaked memo.

The Senate says it will continue its investigation of the corruption allegations against former Chief Justice of Nigeria, Tanko Muhammad, despite his resignation on Monday.

The Senate through its committee on Judiciary, Human Rights and Legal Matters, will meet with relevant stakeholders to “address the complaints raised by the justices of the Supreme Court.

These formed part of the resolutions taken at plenary on Tuesday after lawmakers considered a mini report of the judiciary committee.

The Senate President, Ahmad Lawan, had asked the committee to probe the corruption allegations last week.

PREMIUM TIMES reported how 14 court justices, in a leaked memo, accused Mr Muhammad of not giving justices their legitimate entitlements.

The justices cited challenges that have almost crippled the efficient adjudication of cases at the court – the first of its kind in the 58-year history of the court.

Some major issues raised by the justices are non-replacement of poor vehicles, poor accommodation, lack of drugs at the Supreme Court clinic and poor electricity supply to the Supreme Court.

Others are the increase in electricity tariff, little or no increase in the allowances for diesel and lack of internet services to residences and chambers.

The CJN replied to the justices and addressed some issues, including non-provision of diesel allowances for Justices, non-provision of equipped offices, accommodation, and the complete set of vehicles for new Justices appointed two years ago, among others.

He also allayed the fear of the general public assuring that “there’s no hostility or adverse feelings amongst the Justices of the Supreme Court, as everyone is going about his normal duty.”

Barely a week after the allegations surfaced, Mr Muhammad resigned his position as the CJN on health grounds.

President Muhammadu Buhari would later confer on him the honour of the Grand Commander of the Order of the Niger (GCON) and swore in Olukayode Ariwoola as acting CJN.

Following Mr Muhammad’s resignation, the Senate judiciary committee sought to update the chamber on the developments.

In his presentation, the chairman of the panel, Opeyemi Bamidele, noted that the poor welfare of judicial officers would affect the delivery of the judiciary in respect of their output and will prevent them not to perform optimally.

The sacred image of the judiciary, he said, should be preserved by the Senate through appropriate legislative measures to safeguard the institution and prevent it from being ridiculed.

“Justices are taciturn and reticent in handling issues outside their judicial domain but resorting to such measures in order to protect the Judiciary, requires the Senate to rise up to the occasion to ensure that their demands are addressed,” Mr Bamidele said.

While he informed the Senate that the committee is taking steps to “look into the matter”, he said the former CJN’s resignation “will not prevent the committee from going ahead with its assignment in the quest to find a probable lasting solution to the matter.”

In his contribution, the Deputy Senate President, Ovie Omo-Agege, described the petition by the justices as embarrassing.

He said the judiciary, as an arm of government, “should not lack anything financially.”

The Minority Whip, Chukwuka Utazi, urged lawmakers to return to the constitutional amendment to address the issues.

The Senate committee was thereafter, mandated to interface with the relevant stakeholders within and outside the three arms of government and collate aggregate views and positions on the short term, medium-term and long-term measures needed to decisively address the crisis facing the Judiciary.

This includes the immediate fiscal intervention as well as long-term and sustainable budgetary allocations, required for the optimal performance of the judiciary, in line with global best practices.

The Senate also wished Mr Muhammad well, following many years of meritorious service to the nation and prayed for his good health.