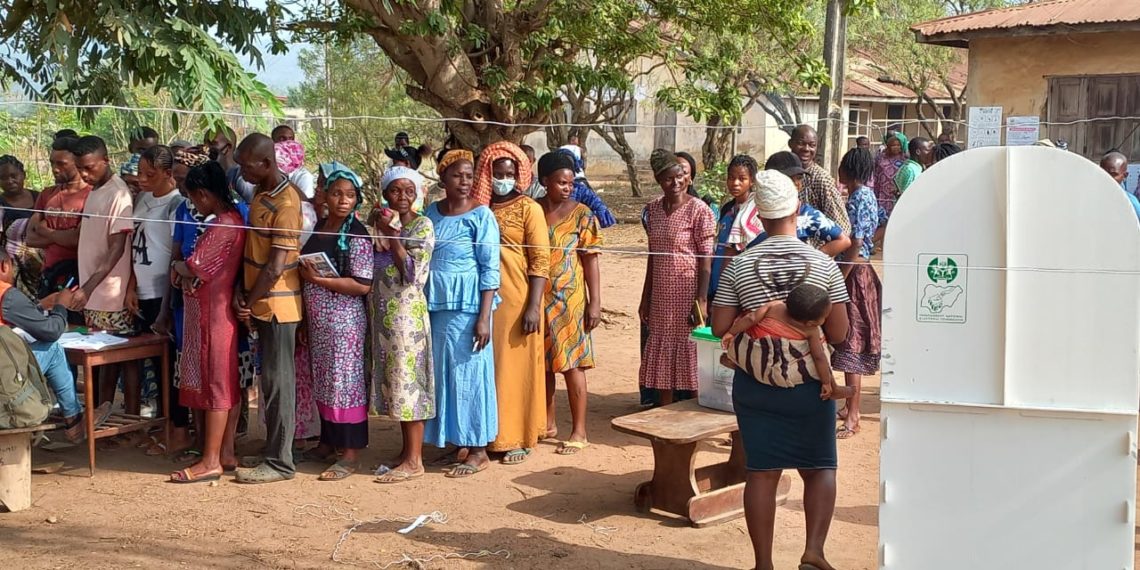 EDITORIAL: Stopping the menace of vote buying in Nigerian elections

PREMIUM TIMES believes that it is not enough for the EFCC or the police to arrest a handful of party foot soldiers who are sharing money to compromised voters on election day.

The recent off-season Ekiti State governorship election was blighted by vote buying, among other malpractices. Vote buying has become an obscene phenomenon that increases in every election in Nigeria without any decisive official response to counteract it. This bodes ill for the 2023 general elections which might end up being decided by the size of the ‘bribe budget’ rather than the choice of citizens. Vote buying must be checkmated to guarantee the right of the people to freely exercise their democratic franchise.

A total of 16 political parties participated in the Ekiti election. According to reports from election observers and the media, some voters received between N5,000 and N10,000 each, under a “See and Pay” subterfuge, in which a thump-printed ballot was displayed to a party agent who stood around a polling booth. While the bigger parties allegedly shelled out these huge sums, some smaller parties purportedly offered between N1,000 and N2,000 per vote. In its corroboration of this grotesque indulgence, the Centre for Democracy and Development, a non-profit organisation, said its field observers documented 41 bribery cases in six local government areas of the State. Segun Oni, the candidate of the Social Democratic Party (SDP), who feels cheated by the vote-bazaar, has vowed to challenge the outcome of the poll on this score, amongst other reasons.

The Socio-Economic and Peoples Right (SERAP), in its nudge for action, gave the Independent National Electoral Commission (INEC) a seven-day ultimatum within which to identify and prosecute the perpetrators, just as the British High Commission in Nigeria stressed that, “buying and selling of votes has no place in a democracy.” The U.K. authorities could not be more correct.

The official tally from INEC showed that 749,065 Personal Voter Cards were issued for the election, out of which 360,753 were used by voters. Cash provision to buy a significant number of these registered voters, at either N5000 or N10,000 per vote, would run into billions of naira. This is simply unacceptable. The Economic and Financial Crimes Commission (EFCC) and National Security and Civil Defence Corps (NSCDC) reportedly made a handful of arrests during the Ekiti election. This is not deterrent enough to curtail this menace.

Admittedly, this kind of electoral malfeasance did not originate in the Ekiti State poll. It has prevailed in every election, and grown with each new poll. In times past, bags of rice, N500 or more were freely given out to induce voters. But this clutched a notch higher in the recent presidential primaries of the two main political parties this year in Abuja, where delegates allegedly received as much as $15,000 each. And conscious of that infamy, INEC warned against monetisation on the eve of the Ekiti poll, while unveiling its partnership with the EFCC and the Independent Corrupt Practices and Other Offences Commission (ICPC). Corruption of the process also happened in the November 2021 governorship election in Anambra State.

But that election showed that the vice is not insurmountable with the aggressive sensitisation of electorates and enforcement of the country’s anti-graft laws, which are in many of our statutes. A viral video in circulation shows rural women in Ukwulu, Dunukofia Local Government Area of Anambra State criticising party representatives who attempted bribing them with N5,000 to vote for a particular candidate. One of the women, Eunice Ngozi Onuegbusi, said that even though she was poor and had no N5,000, she would not vote against her conscience. Her fidelity to principle later paid off, as the then state governor, Willy Obiano, subsequently rewarded her with N1 million.

As the “Show and Pay” Ekiti script suggested, the electoral process was compromised by a slew of officials, including INEC and security personnel. This is where technology could play a critical role. If it were possible that INEC had installed surveillance cameras at the polling units, these would have captured all the shenanigans that took place during the exercise and even raised public consciousness of the danger in running afoul of the law. The use of such equipment should be considered in future elections. A polling booth is supposed to be an enclosure set up to ensure that voters can secretly thump print and cast their ballots. As another governorship election holds in Osun State in July, INEC should ensure that no security personnel or party agents stays around the areas designated for citizens to vote in secret. At the beginning of the vote-buying crisis, voters were using their phone cameras to take pictures and show whom they voted for. It was for that reason that INEC outlawed the carrying of phones into voting booths.

It is possible to reverse the vote buying practice. For instance, it is generally known that politically exposed individuals usually withdraw humongous amounts of cash from banks a few days to elections. As such, it is the responsibility of security agencies to monitor such funds and ensure that they act if these monies are used in violation of the Money Laundering Act 2011, as amended. The law’s 12 Sections were strengthened in 2012. Under the Act, the Nigerian Financial Intelligence Unit and Special Control Unit in the EFCC are to checkmate money laundering activities. Through automation, according to the law, a bank should alert the EFCC on transactions that fall within “suspicious thresholds.” This mechanism has been rendered nugatory. The practice of having billions withdrawn from banks on the eve of elections for vote buying, without the relevant authorities acting, must stop.

PREMIUM TIMES believes that it is not enough for the EFCC or the police to arrest a handful of party foot soldiers who are sharing money to compromised voters on election day. Arresting their main sponsors and making them face the full weight of the law, along with complicit banks, will go a long way in containing this conundrum. It is a farce for anyone to declare an election, in which the will of the people is subverted by vote buying, as “free, fair and credible.” A candidate who wins an election through the financial inducement of voters will obviously not serve the people, but go into public office to loot the treasury to recover the money used to wangle his way through.

INEC has had great difficulty in stopping and lacks sufficient capacity to adequately address electoral abuses such as vote buying, ballot box stuffing and snatching, and thuggery, which have risen to an industrial scale nationwide. It reported 870,000 and 900,000 of these cases in the 2011 and 2015 general elections respectively, but could only prosecute about 200 cases in each electoral cycle. Now is the time for an effective response to pervasive electoral menaces and to establish the much-talked about Electoral Offences Commission and Tribunal to handle, and put a stop to these concerns. The National Assembly should get out of its usual indolence and pay attention to critical issues of national importance such as the speedy consideration of the proposed Bill on the Commission and Tribunal.

PREMIUM TIMES calls on Nigerians to properly see the rather unfortunate phenomenon of vote buying as a very critical impediment to genuine democratic consolidation, which it truly is. The rogue route to political office that vote buying has opened must be closed immediately. Voters who allow unscrupulous politicians to use them to get into office by means of this electoral shenanigan should know that they are throwing away their fundamental rights to democratic accountability through this selfish act. They, and their benefactors, are only fit to be treated as felons and thrown behind bars. The EFCC and ICPC must act accordingly.

Shooting up the U.S.’s rule book, By Uddin Ifeanyi