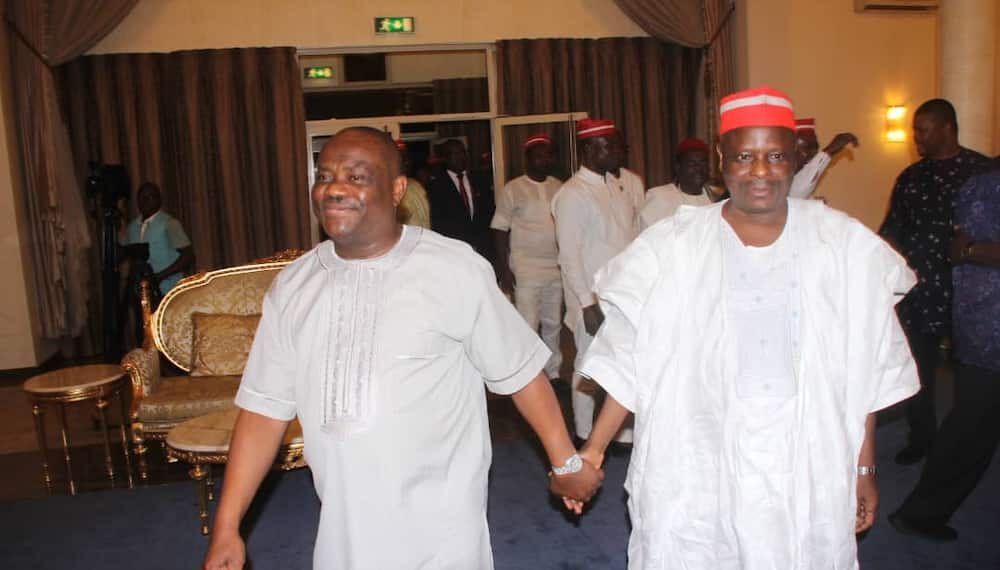 The two have remained in contact even after Mr Kwankwaso defected from the PDP.

The presidential candidate of the New Nigeria People’s Party (NNPP), Rabiu Kwankwaso, will meet the Governor of Rivers State, Nyesom Wike, in Port Harcourt this afternoon in continuation of his search for a running mate for the 2023 election.

Mr Kwankwaso had been holding talks with Peter Obi of the Labour Party exploring the possibility of the two parties merging or forming an alliance for the election.

But the talks are believed to have been bogged down, especially by the knotty issue of who between the two presidential candidates would step down to become the running mate of the other.

Mr Kwankwaso’s scheduled meeting with Mr Wike may, however, be an indication that the former Kano State governor is looking for alternatives.

Aides of Messrs Kwankwaso and Wike confirmed that the two politicians were scheduled to meet in Port Harcourt from about 2.30 p.m. on Friday.

The two sides also said discussions between the politicians at the meeting would likely focus on the 2023 presidential election.

The two have remained in contact even after Mr Kwankwaso defected from the PDP.

It would be recalled that the NNPP candidate helped Mr Wike to win substantial votes from Kano delegates at the PDP primary last month.

Associates of the former governor are in control of the leadership of the PDP in Kano, despite his defection with many of his supporters from the party.

However, it is not clear whether Mr Wike would be persuaded to dump the PDP too and be Mr Kwankwaso’s running mate.

Although the period for the nomination of candidates has closed, a presidential or governorship candidate can substitute their running mate who withdraws before July 15.

But Mr Wike’s people have said they have no intention of moving out of the PDP, despite his recent disappointment over the choice of the party’s vice-presidential candidate.

They said Mr Wike would work for the victory of the party’s candidates in the state but would not commit his resources and energy to other causes whose fruits other persons stand to reap.

Mr Wike has not congratulated Mr Okowa or spoken in public on the choice. He has since met with political leaders from other parties, including Ebonyi State Governor David Umahi of the All Progressives Congress (APC) and Mr Obi of the LP.

Meanwhile, the nine senatorial and House of Representatives candidates of the PDP in Ekiti have declared that they would go anywhere Mr Wike choses to go.

They stated this in a letter they wrote to the Rivers governor and signed on their behalf by Oluyinka Akerele, the House of Reps candidate of the party for Ekiti North 2 federal constituency.

In the letter, the candidates accused the leadership of the party of failing in its responsibilities to the PDP in last week’s governorship election in Ekiti, in which the candidate of the party returned third.

“We are not unmindful of the fact that our support for your legitimate aspiration based on principle of rotational presidency, is not unconnected with the conspiracies against our leader and your good-self. We however wish to state that we will continue to champion very strongly, whatever decision you take publicly without apologies,” the candidates said in the letter.

Read the full text of the letter below:

Thank you Governor Wike On Your Mandate We Stand

Our leader and benefactor, this short note is nothing but appreciation for your support for our party in Ekiti, our leader Ayo Fayose and his followers. You stood so firmly with us, despite the conspiracy against you and our leader.

You came through so strongly for us. Even when for reasons best known to them, those in charge of the party failed in their responsibility (details for another day), you never did

Notwithstanding the outcome, you were still there to show concern as a statesman and a party man that you are.

Having found this immeasurable and exemplary leadership in you, we will remain with you in this struggle. Wherever you go we go, whatever you do we will support

We are not unmindful of the fact that our support for your legitimate aspiration based on principle of rotational presidency, is not unconnected with the conspiracies against our leader and your good-self. We however wish to state that we will continue to champion very strongly, whatever decision you take publicly without apologies.

We will respond strongly and decisively to any attempt at undermining or disrespecting your person and leadership. We will not beg for retevance with them.

Like our leader will say, they have the yem and the knife, whichever way they dice it, we will cook it at the market square for them.

Most importantly, nobody should act as if the election has been won. They may wish away Ekiti: votes but not wish away the voice of Governor Wike and Fayose.

Again, for us, on your mandate we stand.