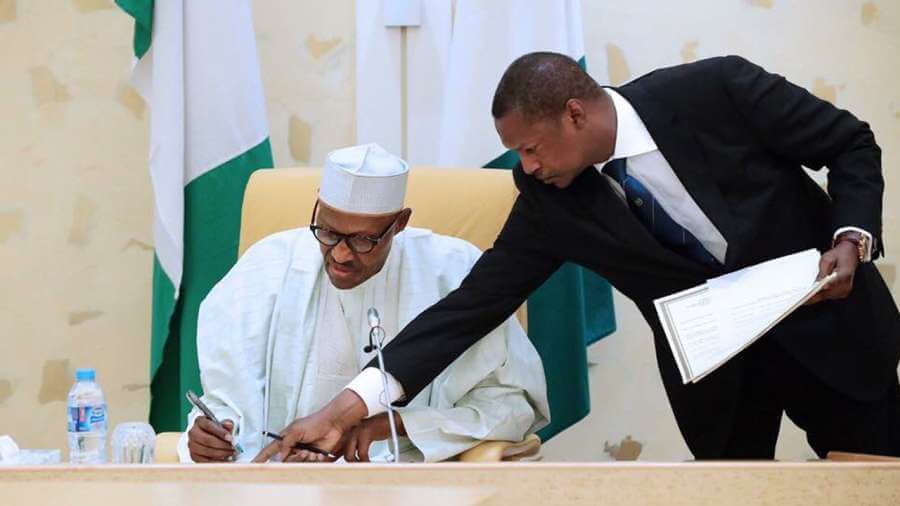 The Supreme Court holds that the request by Mr Buhari to the National Assembly to delete Section 84(12) of Electoral Act amounts to a constitutional violation.

The Supreme Court on Friday struck out a suit filed by President Muhammad Buhari and his attorney-General of the Federation, Abubakar Malami, to challenge the controversial section 84(12) of the Electoral Act.

A seven-judge bench of the Supreme Court, led by Musa Dattijo-Muhammad, unanimously struck out the suit, describing it as an abuse of court process.

Aokmaye Agim, who delivered the lead judgement, held that Mr Buhari, having earlier assented to section 84 (12) of the Electoral Act 2022, cannot turn around to approach the court to strike it down.

He added that the request by Mr Buhari to the National Assembly to delete the provision amounted to constitutional violation.

Mr Agim described the suit as a ploy by Mr Buhari to get the court to validate the violation.

“The president has no power to request or compel the national assembly to amend any part of the Act of the National Assembly in which he has participated in its making,“ he added.

Mr Agim said, “This suit cannot be entertained by this court under section 1(1) (a) of the Additional Jurisdiction of the Supreme Court Act. “

Other members of the panel consented to the lead judgement. They are Dattijo-Muhammad, John Okoro, Amina Augie, Lawal Garba and Ibrahim Saulawa.

The National Assembly rejected the request.

The legal provision bars political appointees at any level from being a voting delegate or be voted for primary election purposes.

The controversial clause in the Electoral Amendment Act 2022, provides that “No political appointee at any level shall be a voting delegate or be voted for at the convention or congress of any political party for the purpose of the nomination of candidates for any election.”

Following the refusal of the National Assembly to delete the provision, Mr Buhari, along with Mr Malami, filed the suit against the provision at the Supreme Court.

They joined the National Assembly as the sole defendant, but the Rivers State government and the Nigerian Bar Association later sought and obtained the court’s leave to be joined as defendants to oppose the suit.

In the suit marked SC/CV/504/2022 and filed on April 29, 2022, Messrs Buhari and Malami sought an order of the Supreme Court striking out the section of the Electoral Act, which they argue was inconsistent with the nation’s constitution.

The plaintiffs also contended that the Nigerian constitution already provides qualification and disqualification for the offices of the President and Vice President, Governor and Deputy Governor, Senate and House of Representatives, House of Assembly, Ministers, Commissioners and Special Advisers.