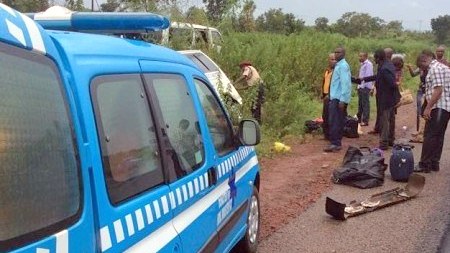 Mr Theman said the accident was a result of brake failure from a trailer conveying gallons of vegetable oil.

The Federal Road Safety Corps (FRSC) in Gombe State has confirmed the death of nine persons in an auto crash that occurred in the state on Wednesday night.

The Corps Commander of the FRSC Gombe State Command, Felix Theman, who confirmed the crash to the News Agency of Nigeria (NAN) on Thursday, said the accident occurred at Bomala junction bye-pass at about 08:40 p.m.

Mr Theman said the accident was a result of brake failure from a trailer conveying gallons of vegetable oil.

According to him, 20 persons were involved in the crash with 11 sustaining various degrees of injury.

He said the injured persons were taken to the Gombe Specialists Hospital and Federal Teaching Hospital, Gombe (FTHG) for treatment.

He also said that the bodies of the seven dead persons were deposited in Specialist Hospital mortuary while the other two were deposited at the FTHG mortuary.

According to him, 21 vehicles were involved in the accidents including tricycles and motorcycles.

Mr Theman cautioned drivers against speeding, especially in built-up areas, adding that speed limit for such areas must not exceed 40km/h.

“If you look at what happened in Bomala junction, the driver was speeding and it is a built-up area and when the break failed, see what we have.”

He said that if drivers complied with speed limits, damage from accidents would be minimised.

“Imagine the number of vehicles, loss of lives and the damage; we must prioritise our safety and that of others while using the roads.

“A survey has been done on the route by our command and we will be putting up a comprehensive report to the state government for immediate, medium and long-term actions”, he said.

The sector commander advised residents of the state to desist from encroaching on roads and prioritise their safety above other interests.