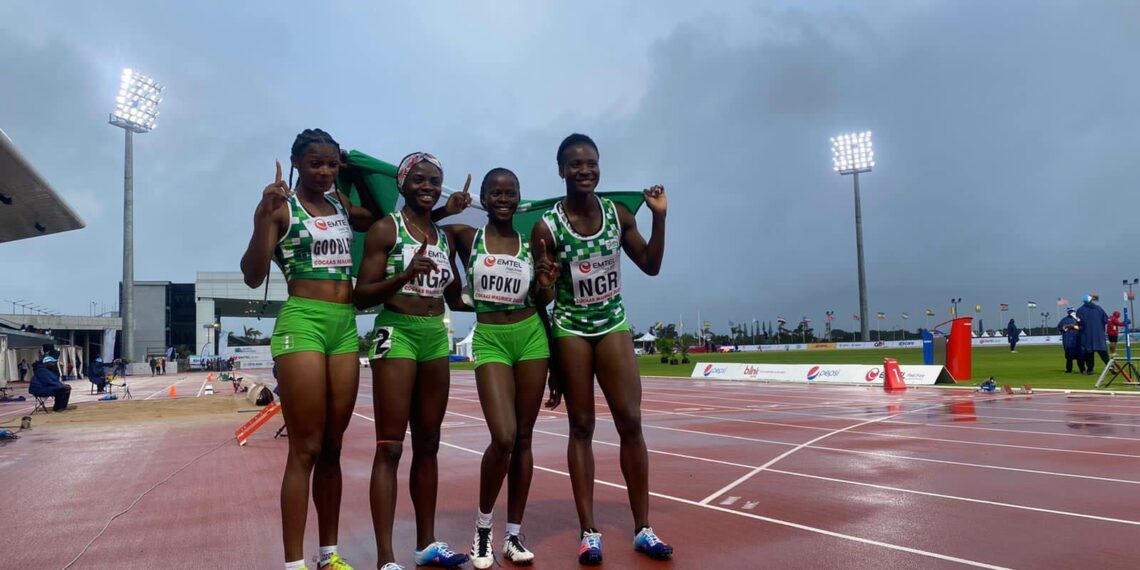 Team Nigeria finished third on the final medals table at the 22nd edition of the African Senior Athletics Championship which ended on Sunday in Mauritius.

Nigeria with five gold, three silver and three bronze medals finished behind Kenya and South Africa who had 10 and 9 Gold medals respectively.

Chukwuebuka Enekwechi ensured that Nigeria finished ahead of fourth placed Algeria with the gold medal he won on the final day of action in the men’s Shot Put event.

Enekwechi did not just win gold, he did it in style, setting a Championship record of 21.20m in the men’s Shot Put, erasing his previous record of 21.08m set in Asaba four years ago.

This is the 2018 Commonwealth Games Silver medallist’s third continental GOLD as he has absolutely dominated the event in Africa since making his debut for Nigeria in 2017.

Also on the final day of action in Maritius, Team Nigeria won bronze in 4x400m relays men and women.

The quartet of Deborah Oke, Queen Usunobun, Ella and Patience Okon George pipped Botswana to third place, while Johnson Nnamani, Chidi Okezie, Adeyemi Sikiru, and Emmanuel Ojeli got round the baton to also win bronze in the men’s category.

The Minister of Youth and Sports Development, Sunday Dare, has praised the performance of Team Nigeria at the just concluded African Senior Athletics Championships in Mauritius.

The minister noted that despite missing some of her top rated athletes, Nigeria still put up a credible outing at the competition, showing her strength in depth in both track and field events.

Dare said the performance of the athletes underlines the positive attitude of Nigerian sports men and women as well as the fighting spirit that makes them succeed against all odds and thrive in the most difficult and unconducive situation.

“Even in the absence of some of our top rated athletes who could not make it to Mauritius, Team Nigeria still fought gallantly and defended our colours brilliantly. We are so proud of them,” the minister said.