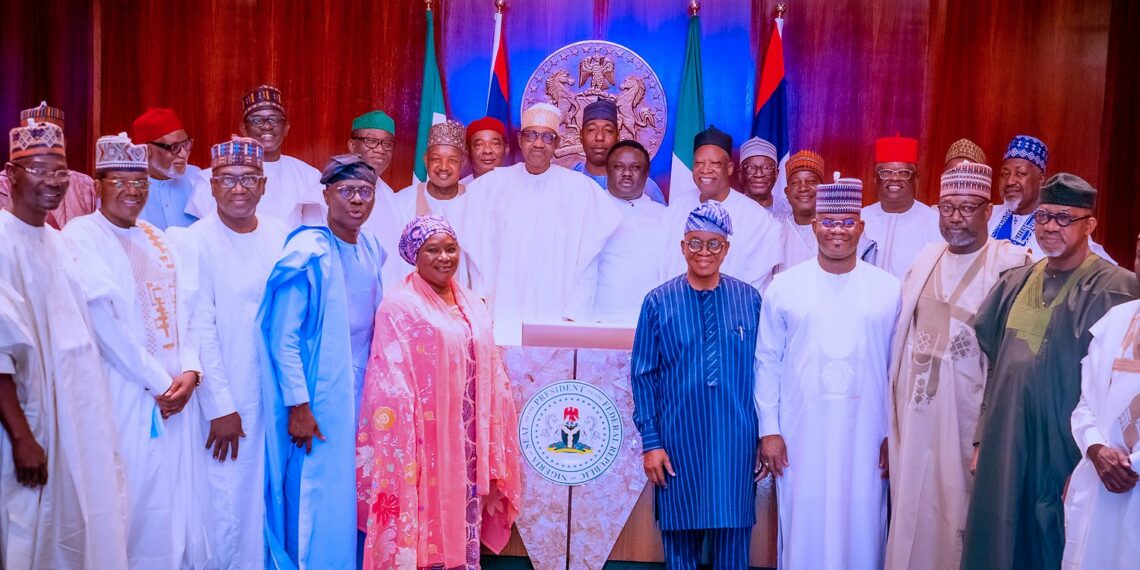 Shortly before departing to Spain on Tuesday, Mr Buhari held a meeting with the APC governors with a request that he should be allowed to pick a successor.

The Progressives Governors’ Forum (PGF) met twice on Tuesday to deliberate on a successor to President Muhammadu Buhari, but the two meetings ended in a deadlock.

Shortly before departing for Spain on Tuesday, Mr Buhari held a meeting with the governors with a request that he should be allowed to pick a successor.

“In keeping with the established internal policies of the Party and as we approach the Convention in a few days, therefore, I wish to solicit the reciprocity and support of the Governors and other stakeholders in picking my successor, who would fly the flag of our party for election into the office of the President of the Federal Republic of Nigeria in 2023,” Mr Buhari said.

After the meeting with Mr Buhari, the governors met at the lodge of Kebbi State governor, Atiku Bagudu, who is the Chairman of the PGF, the association of all APC governors.

At the first meeting, the governors could not agree on how to implement the directive of the president as they were divided along regional lines.

A governor at the meeting told PREMIUM TIMES that some argued that in light of the emergence of former Vice President Atiku Abubakar as the candidate of the PDP, a southern candidate cannot win at the 2023 general elections, hence, a northern candidate should be given priority.

This position was challenged by the southern governors, who insisted that power must rotate to the south after eight years of Mr Buhari.

Earlier, the governors had agreed to nominate candidates for the president to pick, since his directive was not clear. However, the question of region scuffled the meeting. They postponed the meeting till 8 p.m. on Tuesday to continue the deliberation.

At the 8 p.m. meeting, one of the governors informed PREMIUM TIMES, some northern governors insisted on picking a candidate from the north. However, four northern governors; Umar Ganduje of Kano, Abdullahi Sule of Nasarawa, Sani Bello of Niger and Simon Lalong of Plateau – supported their southern counterparts.

Southern governors were unanimous that even though Mr Buhari had spoken, the president should be prevailed upon to pick a southern candidate.

The governors are expected to meet again on Thursday evening.

There are, however, indications that it will be difficult to reach an agreement and the governors may have to wait to get clarification from the president.

Before the president’s stance, many of the governors already had preferred presidential aspirants.

For instance, Mr Ganduje was in the entourage of former Lagos State governor Bola Tinubu to Cross River State to campaign for him. Tanko Almakura, the predecessor of Governor Sule of Nasarawa, was also in the entourage.

Also, Mr Lalong pledged the votes of Plateau State to the immediate past Minister of Transportation, Rotimi Amaechi.

“We had already taken a decision, all former members of the Houses of Assembly took a decision that wherever you go, we would follow you,” Mr Lalong had said when Mr Amaechi visited the state.

In all, five of these governors are contesting for president; two in the North (Governor Abubakar Badaru and Governor Yahaya Bello) and three in the South (Governor Kayode Fayemi of Ekiti, Governor David Umahi of Ebonyi State and Governor Ben Ayade of Cross River).

Aside from those in the race, some like the Lagos State Governor, Babajide Sanwo-olu, Osun State Governor, Gboyega Oyetola and Mr Ganduje are openly involved in the campaign of Mr Tinubu.

Push back from the NWC of APC

Salihu Lukman, the National Vice-Chairman (North-west) of the APC has criticized the president for his planned succession arrangement.

In an op-ed published by PREMIUM TIMES, Mr Lukman argued that any plan to impose any of the aspirants on the party will tarnish the reputation of Mr Buhari.