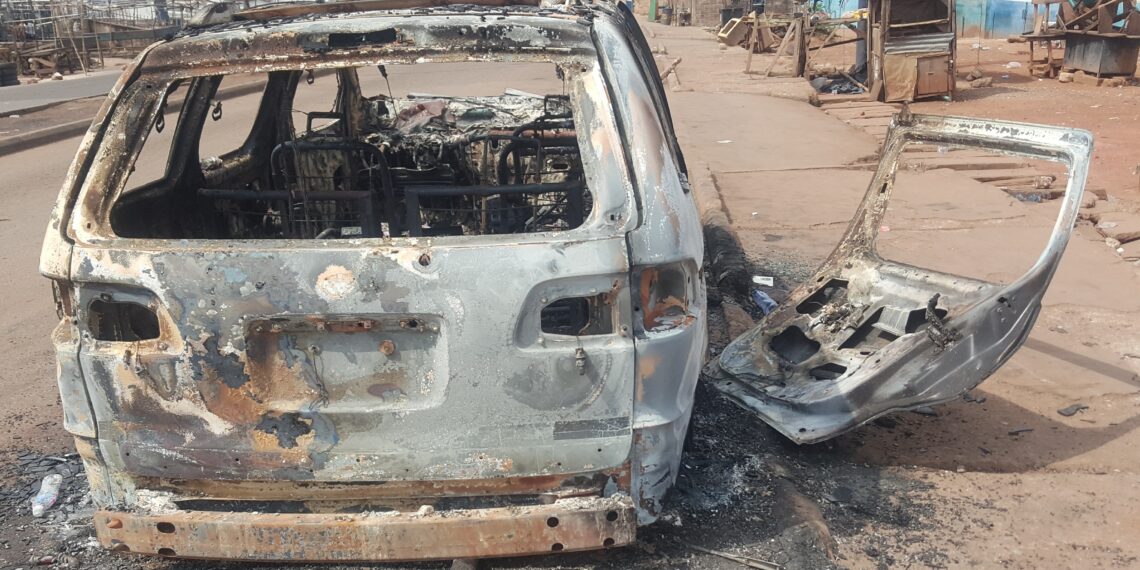 The victim, who was to travel to Abakiliki, the Ebonyi State capital, reportedly refused to lie down, prompting the gunmen to shoot him.

The gunmen, said to be members of the outlawed Indigenous People of Biafra (IPOB) enforcing the suspended Monday sit-at-home order, also snatched away a minibus during the attack.

The incident happened at about 6:30 a.m.

When PREMIUM TIMES visited the scene of the attack, some bus drivers and makeshift traders were seen discussing the attack in hushed tones.

There was no security operative in the area, as of 2:45 p.m.

A tanker driver, Anthony Ezeke, who witnessed the incident, told PREMIUM TIMES that the gunmen stormed the area in a convoy of three Toyota Camry vehicles.

He said the masked gunmen set the Sienna vehicle ablaze after pouring Premium Motor Spirit, also known as petrol, on it.

“They (gunmen) were shouting at some of the drivers there for coming out on a sit-at-home day. Suddenly, a Sienna vehicle went into flames. The passengers and driver ran away. I have told my Oga that I will not be working on Mondays again,” Mr Ezeke said.

A bus driver, who also witnessed the attack, but asked not to be named, told this newspaper that the gunmen killed a passenger who was negotiating the fare with the Sienna driver.

He said the gunmen ordered the passenger, who was to travel to Abakiliki, the Ebonyi State capital, to lie down, but he hesitated to prompt the hoodlums to shoot him.

“Driver was not killed, he ran away. But the gunmen snatched a minibus from another driver. They were wearing masks,” he said.

PREMIUM TIMES learnt that the gunmen had issued warnings to the Sienna drivers to stop operating on Mondays.

The police spokesperson in Enugu State, Daniel Ndukwe, did not respond to calls and text messages seeking comments from him.

Gunmen attacks in the South-east have increased in recent times.

IPOB, a group seeking the creation of an independent State of Biafra which they want to be carved out from the South-east and some parts of the South-south, has been accused of being responsible for the deadly attacks across the two regions.

Photo: The Sienna vehicle razed by gunmen on Monday

Tinubu speaks on Osinbajo’s declaration, says VP not his “son”