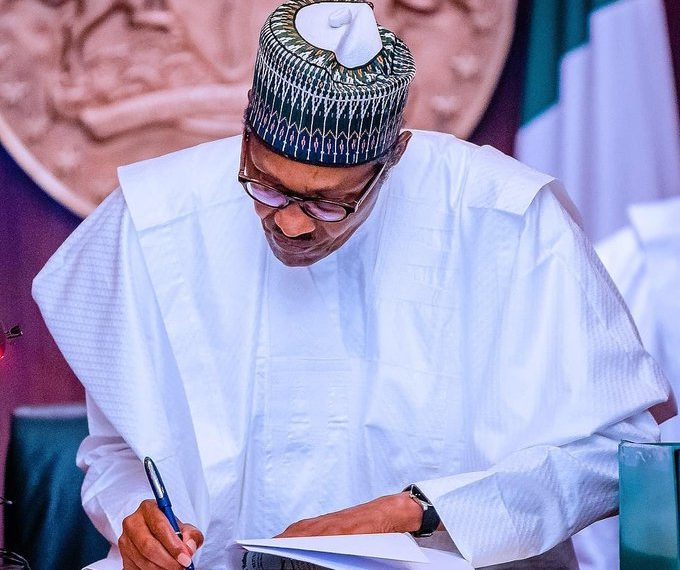 The president signed the bill about at the Presidential Villa on Thursday – in the presence of the Senate President, Ahmad Lawan, the Speaker of the House of Representatives, Femi Gbajabiamila and other officers.

The signing comes a few days after a presidential media aide, Femi Adesina, assured that Mr Buhari will assent to the bill.

Before he signed it, the president sought an amendment to the bill by asking the National Assembly to delete Clause 84(12) of the bill.

The clause reads, “No political appointee at any level shall be a voting delegate or be voted for at the Convention or Congress of any political party for the purpose of the nomination of candidates for any election.”

The president said the Clause constitutes a disenfranchisement of serving political office holders from voting or being voted for at conventions or congresses of any political party, for the purpose of the nomination of candidates for any election in cases where it holds earlier than 30 days to the national election.

“The practical application of section 84(12) of the Electoral Bill, 2022 will, if assented to, by operation of law, subject serving political office holders to inhibitions and restrictions referred to under section 40 and 42 of the 1999 Constitution.

“It is imperative to note that the only constitutional expectation placed on serving political office holders that qualify, by extension as public officers within the context of the constitution is resignation, withdrawal or retirement at least 30 days before the date of the election.

“It will be stretching things beyond the constitutional limit to import extraneous restriction into the constitution on account of the practical application of section 84(12) of the bill where political parties’ conventions and congresses were to hold earlier than 30 days to the election.

“…with particular regards to the benefits of the Bill, industry, time, resources and energy committed in its passage, I hereby assent to the Bill and request the Nationally Assembly to consider immediate amendments that will bring the Bill in tune with constitutionality by way of deleting section 84(12) accordingly,” he said.

Mr Buhari who disclosed that he received inputs from relevant MDAs after thorough reviews of the bill and its implications to Nigeria’s democratic processes, said it contains salient provisions that could positively revolutionise elections in Nigeria through the introduction of new technological innovations.

ALSO READ: FOR THE RECORDS: What Buhari said when he signed reworked electoral bill

These innovations would guarantee the constitutional rights of citizens to vote and to do so effectively he adding that it would improve the effectiveness and transparency of the election process.

The National Assembly had in January, transmitted the reworked version of the bill to the president for assent, after the latter half rejected it five times – citing reasons that ranged from cost of election, insecurity, drafting errors to proximity to the date of elections.

In the newly signed bill, the lawmakers had addressed an issue raised by the president – the mode of primaries for which political parties will conduct primary elections to elect candidates for political offices.

The new law provides political parties the have the option of using direct, indirect or consensus modes of primaries.

It also provides for the use of electronic voting and electronic transmission of results.

Many individuals and civic groups, who have called for electoral reforms have, said the law will ease electoral processes and promote fairness and credibility in future elections.