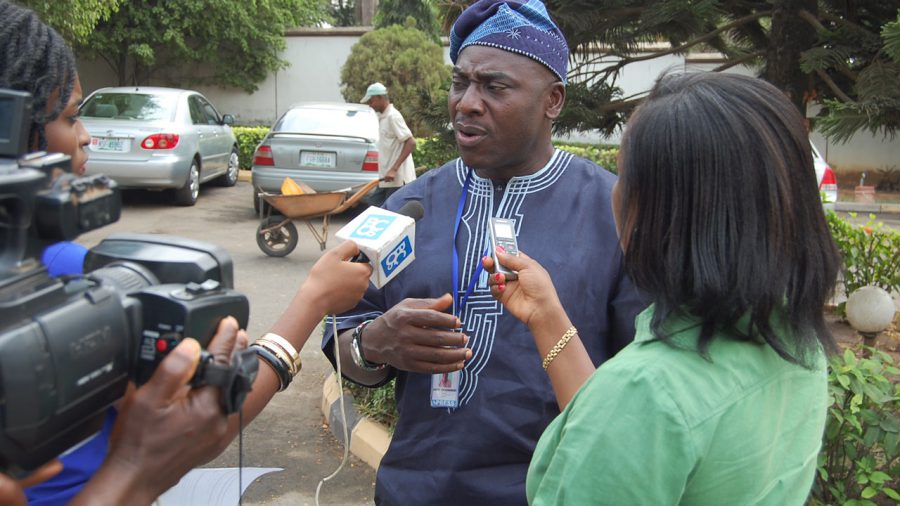 How I was held at airport by SSS – IPC director

Mr Arogundade said the Thursday afternoon incident was not the first time.

The Executive Director of the International Press Centre, Lanre Arogundade, was held at the airport by Nigeria’s secret police, the State Security Service (SSS), for nearly two hours for unknown reasons.

Mr Arogundade was returning from The Gambia where he had gone to conduct a training programme on ‘Conflict Sensitive Journalism,’ when he was stopped at the Murtala Muhammed International Airport.

A statement by Femi Falana, a Senior Advocate of Nigeria, Thursday afternoon, while Mr Arogundade was still being held, said the journalist’s “detention cannot be justified.”

“We have confirmed that his name is not on the Watch List,” Mr Falana said.

“Hence, he was not prevented from travelling out of Nigeria. We have equally confirmed that he did not commit any offence in The Gambia to warrant his arrest and detention by security agencies in Nigeria.”

Peter Afunanya, the SSS spokesperson, did not immediately respond to phone calls and a text message on Thursday night.

Mr Arogundade said the Thursday afternoon incident was not the first time.

“For as long as I’ve been travelling now, if I get to the airport and I present my passport for normal immigration protocol, once the DSS (another moniker for the SSS) official who normally collects it, their official, they would ask me to hold on, they would take the passport to another official, and sometimes to a third official, converse among themselves,” Mr Arogundade told PREMIUM TIMES over the phone.

“On a few occasions, I almost missed my flight. So, partly because of them I try to arrive at the airport early because it has become a ritual.”

Mr Arogundade said when he was leaving for The Gambia on January 30th, “the same thing happened.”

“At a stage, I asked one of the DSS officers what exactly is the reason, why are they always doing this?”

Upon his return on Thursday, Mr Arogundade said he was subjected to the same treatment.

After his flight touched down at around 3.10 p.m., he said when he got to the checking counter about 20 minutes later, an SSS collected his passport, took a look, and asked him to step out of the line and follow him.

“I followed him. He took me to one senior immigration official, he first discussed with that one, I didn’t know what they were discussing. Then that one collected my passport and went to another system and started asking me questions. ‘What is your name?’ ‘What do you do?’ ‘Where are you coming from?’

“I said look what are all these questions about? You are holding my passport and you’re asking me who I am, don’t you have the information there? Do I look different from what you have there?”

Mr Arogundade said after he refused to answer immigration official’s questions, the SSS officer collected the passport back and told him, again, to follow him.

“When we got to their office, he gave my passport to a senior official there, as assistant director. He first spoke with him, I didn’t know what they were saying… So that one was saying that I’m getting annoyed and I said ‘why won’t I get annoyed?'”

Mr Arogundade said while the incident was going on, he phoned his lawyer, Olumide Fusika (SAN), and some colleagues to let them know about his ordeal.

“When I got to their office, I took a selfie. Then after that I said let me even take the picture of the office. When I took the picture, another official there got annoyed and snatched my phone from me and said I was doing illegal filming of their office. I said under what section of the Constitution is it illegal to take photograph of where I’m being held?'”

He said the president of the Nigerian Guild of Editors later spoke with the senior SSS official and demanded to know why he was being held.

According to him, the official said it was a case of mistaken identity.

“I was in their office for over one hour. At the end of the day, the official started apologising.

“The official accompanied me back to the immigration, they now said they have stamped my passport, followed me to collect my luggage and even escorted me out.”

While he was still being held at the airport, Mr Arogundade posted on his Facebook page showing where he was “held or detained” against his wish.

He said the SSS ”had always harassed him at the airport ever since the days of military rule”.

“On one occasion, at departure, they questioned me for some time before returning my passport, by that time the plane was almost completely boarding,” he told PREMIUM TIMES.

“I need to know why because I don’t want to travel and then become afraid. So that if they are having any issue let them say it openly and then we can go and argue it in court.”