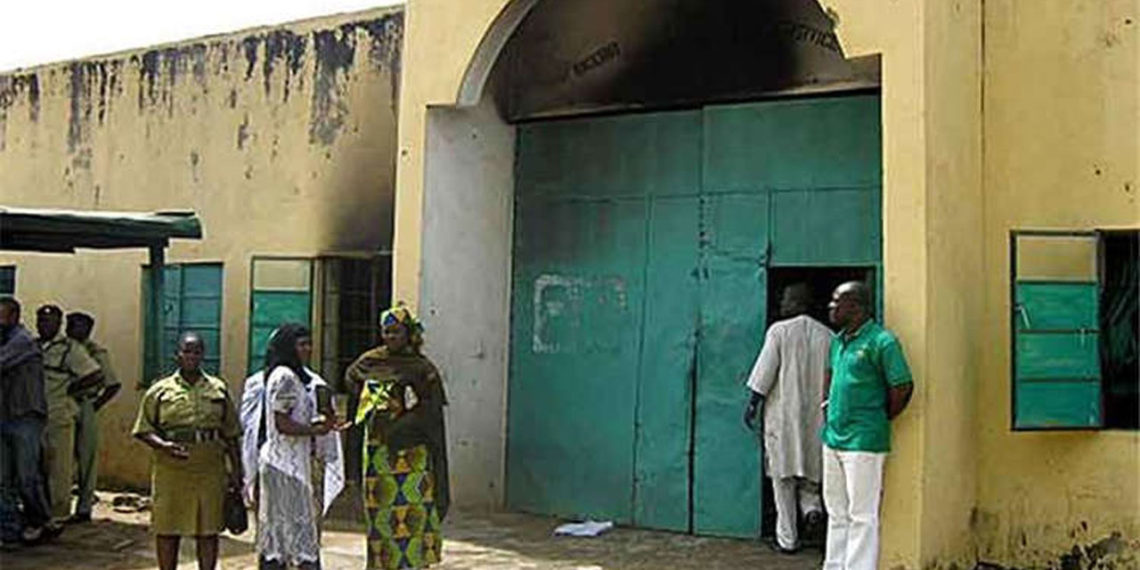 FILE PHOTO: A prison used to illustrate a story

ANALYSIS: Why jailbreaks have become commonplace in Nigeria

There have been at least 13 other jailbreaks since the October 2020 incident with at least six of them successful.

Nigeria’s poor security situation is being made worse by incessant jailbreaks, which have resulted in more criminals returning illegally to society, experts have told PREMIUM TIMES.

Security experts and analysts blame the recurring prison breaks on an infrastructural deficit, overcrowding of cells, the prolonged trial of suspects, understaffing, poor remuneration and equipping of staff, inadequate technology, bribery and corruption, and other institutional challenges bedevilling the correctional centres across the country.

Since October 2020 when hoodlums took advantage of the #ENDSARS protest to attack three Nigerian Correctional Service (NCoS) facilities in Edo and Ondo states, releasing over two thousand inmates and killing about a dozen security agents manning the facilities, the country has continued to witness more incidents of prison breaks.

At least 2,051 inmates escaped after the October 2020 jailbreaks in both states while some of the inmates voluntarily returned and turned themselves in.

There have been at least 13 other jailbreaks since the October 2020 incident with at least six of them successful.

In the past year, 5,238 inmates have escaped from various prisons across Nigeria, according to a PREMIUM TIMES analysis.

The prison break at the Jos Medium Security Custodial Centre on November 28 where 262 inmates escaped is the latest of such jailbreaks.

It came just a few weeks after that of Abolongo Custodial Centre in Oyo State where unidentified gunmen freed hundreds of inmates.

Just a month before that, a similar incident happened at the Kabba correctional centre in Kogi State. Two security personnel were killed in the process while hundreds of inmates escaped.

Six months earlier, a total of 1,844 prisoners were freed when gunmen suspected to be members of the outlawed Indigenous People Of Biafra (IPOB) attacked another correctional facility in Owerri, Imo State.

Security experts believe these jailbreaks may worsen if strict actions are not taken.

PREMIUM TIMES in this report examines why Nigerian prisons have increasingly become under siege.

Loopholes in operations of Nigerian prisons

The Nigeria Correctional Service (NCoS), formerly known as the Nigeria Prisons Service (NPS), has remained in the eye of the storm due to the growing trend of jailbreaks across Nigeria.

Despite the billions of naira budgeted for the agency annually, the structures in many prisons across Nigeria remain dilapidated. Prison cells are overcrowded and there is a shortage of prison vans to convey inmates to court for trial. Staff and prison officials are also poorly paid.

Last year, the House of Representatives expressed displeasure at the state of the custodial centres and moved to probe the N613 billion allocated to the agency in the last 10 years (2010-2019). The lawmakers noted that the federal government spends N17 billion every year to feed inmates in 244 correctional centres but inmates still live in unconducive environments, a situation they said amounts to the violation of their human rights.

Available statistics show that the current administration has so far made the highest allocations to the prison sector in the history of the agency, but the impact is yet to show as the constant challenge of overcrowding persists.

The National Human Rights Commission had in a 2012 audit of the Nigerian prisons, submitted that prison structures across many parts of the country were old and dilapidated as most of them were built in the 19th Century by the British colonial masters.

Yet, little or nothing has been done to rebuild the infrastructural deficit and institutional challenges.

According to figures provided by a global prison data organisation, World Prison Brief, awaiting trial inmates in Nigerian prisons have risen from 62 per cent in 2000 to nearly 70 per cent.

The National Coordinator, Legal Defence for Human Rights, Nzube Ojiugo, said jailbreaks became inevitable when people who had a small brush with the law were kept in prison for long, awaiting trial in perpetuity.

“You lock up somebody who is presumed innocent for so many years and nobody is talking about trial and nobody is giving them information. They get to mix up with hardened criminals who are kept in prison for heinous crimes. Such situation breeds violence especially with several institutional lapses in Nigerian prisons which are glaring,” he said.

“The justice system should recognise that people who come in conflict with the law are presumed innocent until they are convicted and therefore should treat their cases expeditiously.

“There are people who were arrested for terrorism and have been there for five years without trial, it’s natural especially for such people to revolt. And that’s exactly what we are seeing. And of course, one successful jailbreak motivates another.”

A PREMIUM TIMES investigation in 2019 showed how thousands languish in Nigerian prisons for years without trial.

For Michael Abiodun, a security analyst, the problem of prison congestion and jailbreak are intertwined.

“The undue delay in the nation’s criminal justice system, resulting in a huge number of awaiting trial inmates, contributes to this incessant prison breaks.

“While the number of people in prison is growing, there is not enough space, facility and prison staff to guard them.

“The majority of persons in prisons are remand prisoners. The inability of the courts to process cases of persons charged with criminal offences quickly has led to congestion in our prisons.”

According to Mr Abiodun, one of the main reasons for the inability of the courts to expeditiously process criminal cases was the shortage of prison vans to convey inmates to court for their trials.

A retired colonel in the military, who asked not to be named, described the incessant prison break Nigeria is experiencing as the hallmark of the security crisis in the country.

“Different armed groups are unleashing violence in almost all parts of the country and when you look at it, they are the ones leading these attacks on prisons.

“Aside from releasing their colleagues and more hardened criminals to join their cause, this is also a way to undermine the Nigerian security architecture.

“Correctional facilities which are expected to be the most secured government facilities in the country are now constantly invaded. This is a ploy by these armed groups to increase fear and apprehension in the society”, he said.

For Timothy Okoh, a security expert, those invading the correctional centres do not hatch their plans in isolation.

“I believe there is a connivance with prison officials for these jailbreaks to happen,” he said.

What government is doing?

In its latest response to the prison breaks, the Nigerian government vowed to ensure no more jail breaks in the country.

The Minister of Interior, Rauf Aregbesola, on Friday in Abuja, said anyone or group who, henceforth, tries to break out prisoners from any correctional centre in the country is on a suicide mission due to several plans being put in place to fortify the prisons across the country.

The minister also said the government has put several mechanisms in place to track escaped inmates, warning them to return voluntarily to avoid further severe punishment.

Mr Aregbesola noted that through the tracking mechanism, several prison escapees have been captured.

The Ministry of Interior had on Thursday published the photos of prison inmates who escaped from Jos Medium Security Custodial Centre.

Some 262 inmates escaped from the facility on November 28, but the interior ministry said 10 of them have been recaptured.

In a bid to ensure adequate profiling of prison inmates, the Nigerian government said it has captured the biometric data of all inmates in Nigerian correctional centres.

“I will like to inform Nigerians that we have captured the biometric information of all inmates in the facilities of NCoS, working in partnership with the Nigerian Identity Management Commission (NIMC)”, the interior minister said on Friday.

“Therefore, we have the capacity and are tracking all escapees from our facilities. In addition, we are working with and have shared the details of escapees with INTERPOL, to check the risks of cross border movements,” the minister revealed.

He said 4,860 inmates escaped from various custodial centres from 2020 till date, and out of this, 984 have been recaptured.

The official, however, noted that about 3,000 inmates who escaped from various prisons in the past year are still at large.

What government should do

Austin Njoku, a former spokesperson of the correctional service, said the fact that many correctional centres in the country have been ‘overtaken by urbanisation’ is a challenge that needs to be addressed.

“Take Owerri for example, take Aba, take Porthacourt prison, all of them are situated in the town and the real sense of it is that if you travel outside the country, you will discover that a prison is built in quite an isolated place where there are buffer zones, you cross hurdles and red zones before you gain access.

“If you are coming with a mind to attack, before you reach the first gate, second gate and third gate, the security will be aware that the person coming has an agenda. But in a situation that you look at the main road and look at prison and within them there are markets springing up here and there, it is not helping anybody.

“We should condemn most of the correctional centres we have now, they are not up to standard, they can’t hold the calibre of inmates we have.

“The agenda of these people is to recruit people to come and help them in this insecurity we are facing now.

“Government should bring out money, the idea of when something happens you bring a committee and sit down and bring it some few millions to buy vehicles is not helping, the structures are such that cannot enable the security officers to face any attacker.

“That place is like a market zone, everybody is passing and you don’t know who is coming from anywhere, the prison is not supposed to be in a place like that. If you are coming, the first gate should stop you and after that if you are an attacker, you will be confronted from there and they won’t have to come near the prison wall,” the retired official said.

He added that “there must be conscious efforts to create at least areas like a buffer zone that when you cross over there, you will be killed.

“Think of any custodial center you will see in Nigeria, all of them are situated inside the town, you can’t stop people and motorists from passing and you don’t know who is who so it becomes a problem.”

For Mr Okoh, the security expert, the issue of poor prison facilities, inadequate security features such as CCTV, motion sensors, and high electric fences should be addressed urgently.

For Mr Ojiugo, who is also a lawyer, the government must control overcrowding to be able to properly secure the prisons.

“The government should embark on a prison audit to identify people who have stayed for more than a year in the prison, to give their cases urgent attention,” he said.

Attahiru Jega: The measure of excellence and integrity, By Toyin Falola

The greatest investments in life are in people, By Ayo Akerele