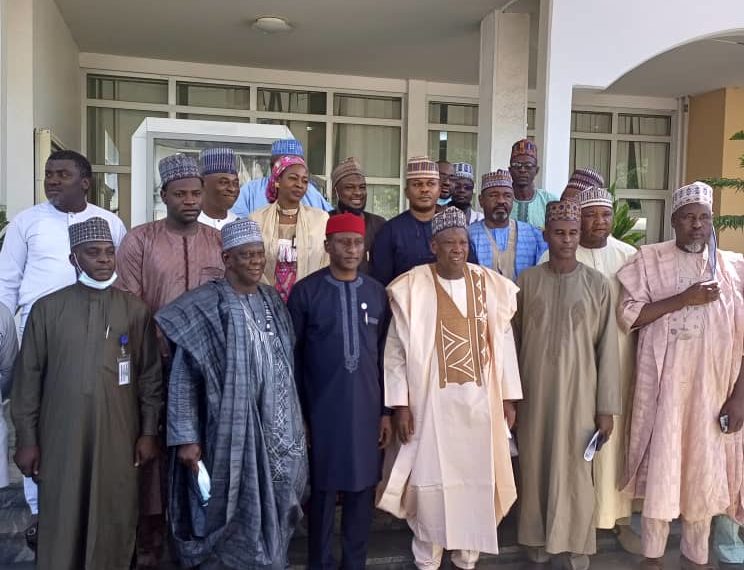 Group photograph at Kano State Government house during a courtsey visit by the Minister of State, Ministry of Mines and Steel Development

Despite its potential to catalyse the nation’s economy for growth and development, it has been a sad tale of resource-curse for gold with its mining characterised by violence, smuggling, abductions and killings

Nigeria is blessed with abundant mineral resources with some of the world’s finest stones traceable to the country.

With an estimated 200 metric tons of proven reserve, gold is listed as one of the seven strategic minerals set to unlock the potentials of Nigeria’s mining sector.

Apart from oil and gas, gold is the most valuable mineral resource in the country. Nigerian gold is said to have gained popularity within and outside the region. For example, reports show that the Maru gold from Zamfara State is identified by sight and called “Zamfara” at the Dubai gold souk by gold merchants.

However, despite its potential to catalyse the nation’s economy for growth and development, it has been a sad tale of resource-curse for gold, whose mining, usually done by artisans, is marred with a lot of vices including but not limited to illegal exploitation, smuggling, child labour, killings, health hazards, among others.

In 2018, a total of 315 gold titles were issued and eight states, according to NEITI, produced 1212.77 ounces of the mined gold in the country with Osun and Niger states contributing 70.36 per cent of the total production.

In 2019, a total of 2,586 were the valid mineral titles for the seven strategic minerals. Gold accounted for the highest issuance of 1,141 licences, representing 44.12 per cent of the total valid titles.

During the year, the Nigeria Extractive Industries Transparency Initiative (NEITI) said only 43 mineral buying centres had 325 valid licenses with an official gold output quantity of 1,212.77 ounces estimated at N11.69 billion, with a gross royalty payment of N6.46 million by 31 companies.

But gold’s poor contribution to royalty payment is blamed largely on illegal activities in the sector, a development with reports indicating that Nigeria annually loses $9 billion to smuggling, among other shady deals.

Reacting to the development, the Senate whip, Orji Kalu, once moved a motion calling for the investigation of the alleged revenue loss to the government.

Mr Kalu’s motion was triggered by a public hearing called by the Senate committee on solid minerals, mines, steel development, and metallurgy. At the hearing, the Minister of State for Mines and Steel Development, Uchechukwu Ogah, had blamed the challenges experienced in the mining sector on the alleged connivance of security operatives with illegal miners, lack of adequate manpower, low-level technology, even as he accused private jet owners of conniving with illegal miners to smuggle gold out of the country.

Apart from revenue loss, gold mining is also said to have fuelled banditry especially in the northwestern states where kidnapping and violent terrorism are daily on the rise. Illegally mined gold is reported to be exchanged for arms by the criminals.

A report by EnactAfrica shows that 6,319 deaths were linked to mining-related conflicts in Zamfara State between 2011 and 2019.

Zamfara State is known for notorious illegal mining operations which were believed to be fueling insecurity in the state and its environs. This made the President place a ban on mining activities in 2019 and in 2020 declared a “no-fly zone” on the state as a measure to curb insecurity.

In 2010, an outbreak of lead poisoning was discovered in Zamfara State by an aid group where over 400 inhabitants, mostly children under the age of five, died of contamination from lead poisoning which originated from gold mining.

Also in 2015, 28 children were reported dead from lead poisoning-related ailments in Niger states.

Piqued by the rot in the gold mining and marketing subsector, the Nigerian government said it is ready to rewrite the story.

And if the plans are followed with the required action and commitment Nigeria may well be on the verge of becoming an African gold mining hub, especially with the recent groundbreaking foundation laying of the first-ever gold market, otherwise known as souk in the Northwestern state of Kano.

When completed, Kano Gold Souk (KGS) would be arguably the first of its kind in the whole of Africa. This by implication could be a game-changer for the sector, thereby turning the country into a gold destination just like the world-famous Dubai souk in Deira.

During a courtesy visit to the Kano State Governor Umar Ganduje in October, the Minister of State, Ministry of Mines and Steel Development, Uchechuwku Ogah, described the gold souk as a timely intervention to fulfill the mandate of bringing prosperity to Nigerians and “to create a home for key people.”

He said: “There will be a lot of critical investment and articles of artisanal miners, and the value creation that will come to them. Over the years, they have fallen into the hands of bandits and evil people but we are going to have a formalised way, a structured way that the state and federal will be involved and this will help in bringing further prosperity especially to the women.”

The minister, while making a request for an extension of the land from the host state, said the vision of the government is to make the souk a one-stop shop for gold merchants in the country and the African region as a whole.

“For us, we are looking at the entire value chain that will come into place. We want the private sector to come in and we expect that there is going to be a foreign direct investment into that place. So we want the situation whereby at the end of this project, people will see the vision and focus of Mr President in creating the Presidential Artisanal Gold Mining Initiative,” Mr Ogah said.

In response, the ecstatic governor pledged the state’s support for the growth and development of the sector and by implication, the people.

He said: “Pertaining to mining, we have mining areas in the southern part of Kano where white men used to settle, and up till now, you can find the pits and even the local miners are always entering that place trying to get gold and other minerals in that area.

“So you can see that it’s not new, the only thing is the modernisation. I think we are also ready to benefit from that with the policy the federal government has made. That is why immediately you requested for land extension, we made the land available to you. Since I am also intoxicated in the music of mining, I will also join you to twist,” the governor said.

The mining sector currently contributes less than 1 per cent to the national Gross Domestic Product (GDP) despite having a robust legal framework believed to be one of the best in the world. The Nigerian economy is believed not to have benefited financially from the sector even with the mineral abundance.

However, in a bid to foster growth and development in the sector, the federal government came up with several initiatives, including the Presidential Artisanal Gold Mining Initiative (PAGMI).

In 2020, the first artisanally mined, processed and refined gold bars were presented to the President and purchased by the Central Bank of Nigeria (CBN). This was done to create awareness on access to markets for the artisanal miners through a National Gold Purchase Program and the deployment of enhanced mining methods at artisanal and small-scale mining sites.

Recently, Thor Explorations, a Canadian mining company began a large-scale gold mining in Nigeria and is set to pay it’s first royalty to the federal government, as said by its CRO, Segun Lawson at the just concluded 5th annual mining week.

This is considered a major breakthrough for the sector as the success is expected to attract other investors.

Shortly before his sudden death a few weeks ago, the President of the Miners Association of Nigeria (MAN), Kabiru kankara told PREMIUM TIMES that his association, despite its significant role in the mining business, ”was not carried along in the ongoing gold market planning and execution”.

He said: “To some extent, we are not in the picture of everything. Maybe for security reasons but we are the miners and producers of the gold. So we advise that they bring us on board. Let us sit down at the drawing table and come together with a structure or formula where everybody will be comfortable doing their business transaction and the government can collect royalty and everyone including buyers go home happy.”

He, however, lauded the intervention, saying; “It will go a long way in showcasing what we have in Nigeria and attract markets from the neighboring countries.

Similarly, while interacting with this reporter in Kano, the state’s chapter chairman of MAN, Yahya Kulo, tasked the government on transparency and emphasised the need for collaboration.

He said: “We need the government to tell us who and who are going to sit in the market so that we can sit with them and discuss some issues which the miners are going through.”

For Usman Abdullahi, a gold seller at the Rimi Market, even though the gold souk is a welcome development, his concern is the insecurity in the state and the nation as a whole.

He said for obvious reasons, he takes his goods (gold) at the end of each day to the bank for safety. He, therefore, charged the government on the need for quality and adequate security to keep the market safe from criminals.

However, there seems to be a lack of awareness and sensitisation among the marketers as most of them claim they are not aware of the gold souk.

But the Senior Special Adviser (SSA) to Kano State Governor on Solid Minerals, Balaraba Ahmed, said the state is planning on creating awareness before inaugurating the souk.

On insecurity, she said the state government is already making arrangements with the security agencies to ensure maximum protection.

She said: “We have security agents. The office of the Nigeria Security and Civil Defence Corps (NSCDC) is very close to the market. There is that arrangement by the government with security agencies to see how many security agents will be needed from morning till night and then there will be shifts. Kano has no record of violent attacks or bloodshed, we are a peaceful people. But we pray that anywhere there is insecurity God will give us peace.”

Meanwhile, the director of the federal ministry’s artisanal and small-scale mining department, Patrick Ojeka, said the government would be providing infrastructure as an intervention.

He said; “Historically, we know that Kano has been in the Sub-Saharan trade sector and people come as far as Senegal to buy jewelry even till the modern-day.

“There is a renowned female gold jeweler in Kano who is known as far Germany, Iran, Saudi Arabia and Dubai and people come from all over the places to buy gold from her in Kano. If such a person tomorrow is at the market it will definitely boost the confidence of a lot of operators and marketers.”

The director also assured the prospective sellers and buyers at the market of the government’s support for maximum security.