In Nigeria, the pandemic has made more complicated what many experts described as consistent neglect of mental health by successive administrations in the country.

Like never before, mental health management became more critical globally within the last one year due largely to the coronavirus pandemic which negatively impacted the world’s socio-economic and governance order.

But in Nigeria, the pandemic has only made more complicated what many experts described as consistent neglect of the mental healthcare subsector by successive administrations in the country.

Apart from the challenges posed by an archaic legislation governing the management of mental health and the very poor budgetary allocations and releases by the government, the socio-economic hardship faced by many Nigerians has increased the mental health burden above tolerable levels in Nigeria.

For instance, even before the outbreak of the pandemic, statistics from the World Health Organisation (WHO) had indicated that one in every four Nigerians, that is, an average of 50 million people, is suffering from a mental illness.

A consultant psychiatrist at 68 Nigerian Army Reference Hospital, Yaba, Lagos, Akin Oguntuase, told PREMIUM TIMES that researches have shown that the rising cases of mental health issues in Nigeria have been linked to factors such as poor economic condition, rising cases of illiteracy, marriage crisis, polygamy, large family, among others.

He said a large proportion of the mental challenges are drug-related, saying; “The reality today, unlike in the past, is that we now experience more dual diagnosis for our patients because in one way or the other, they have something to do with drugs.”

Today, as the world commemorates this year’s World Mental Health Day, PREMIUM TIMES’ findings show that the country could be in for harder times as there are no deliberate efforts on the part of the government to address the existing inadequacies in mental health management in the country.

She further described it as a clinically recognisable behaviour that is associated in most cases with distress that interferes with functioning.

According to her, everyone is vulnerable to having an emotional illness, “provided the individual has a brain, like other organs of the body.”

“Any organ of the body can malfunction at any point in time in an individual’s lifetime. There are predisposing factors to emotional illness, and some may be life events, such as natural disasters, loss of loved ones, jobs or properties,” she said.

The health expert frowned at the use of the word “madness” for people with mental disorders, noting that emotional illnesses such as panic attacks are characterised by a discrete period in which there is the sudden onset of intense apprehension and fearfulness.

These conditions, she noted, are often associated with a feeling of impending doom, which she said, has to do with distorted thoughts and that it is treatable when diagnosed early.

“Many emotional illnesses are not intense and are treatable by professionals when diagnosed early enough. It is wrong to use the word “mad” for any individual,” she added.

First observed on 10 October,1992 by a group of experts under the umbrella of World Federation for Mental Health (WFMH), the commemoration drew the world’s attention in 1994 when for the first time it endorsed a global theme: “Improving the Quality of Mental Health Services throughout the World.” 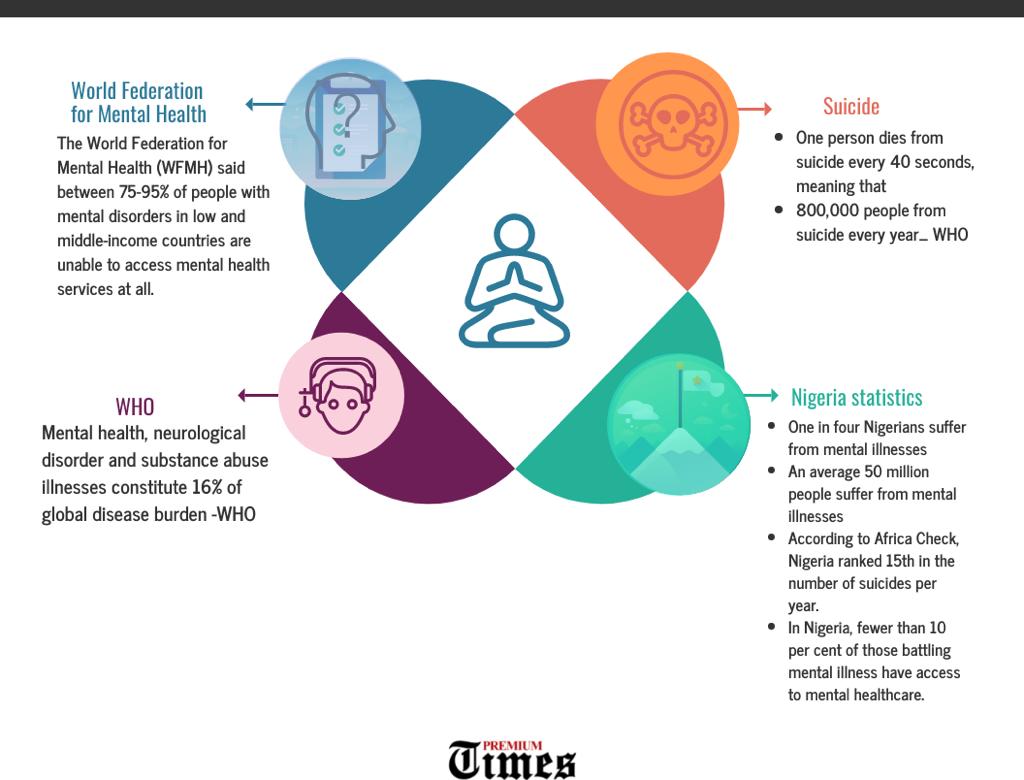 Since then, the commemoration has gained global relevance and recognition as WHO has consistently partnered WFMH and other partners to raise awareness and education around issues of mental health.

This year’s theme; “Mental Health in an Unequal World,” aims to address the deepening inequalities in societies around the world, especially those suffered by persons due to poverty, race, ethnicity, sexual orientation, gender, and human rights violations.

It also aims to highlight how access to mental health services remains unequal.

According to WHO, the COVID-19 pandemic has had 3 major impacts on people’s mental health, noting that some groups, including health and other frontline workers, students, people living alone, and those with pre-existing mental health conditions, have been particularly affected.

The global organisation said due to global attention on the pandemic, services for mental and neurological disorders have been significantly disrupted.

The day, WHO says, therefore, provides an opportunity to come together and act together for mental health issues that are currently affecting the world and ensure people are able to enjoy good mental health.

According to WFMH, between 75-95 per cent of people with mental disorders in low and middle-income countries such as Nigeria are unable to access mental health services at all.

The global body added that 5.0 per cent of adults suffer from depression globally, and that mental health, neurological disorder and substance abuse illnesses constitute 16 per cent of the global burden of disease.

It also said that one person dies from suicide every 40 seconds totalling 800,000 deaths annually, adding that one in every six children between the ages of 10-19 years around the world suffers from mental health issues.

For an estimated population of 206 million, according to the latest data by the National Bureau Statistics, WHO says one in four Nigerians, an average of 50 million people, is suffering from mental illnesses.

According to Africa Check, Nigeria ranks 15th in the number of suicides per year, and that it is the most depressed country on the continent of Africa.

Further findings have shown that fewer than 10 per cent of those battling mental illness have access to mental healthcare due largely to the country’s outdated laws and poor budgetary allocation to the sector.

There can be no better evidence to prove the neglect of mental healthcare in Nigeria than the refusal to review the laws governing its management for more than five decades.

The existing law in the country, known as Regional Lunacy Law, was enacted in 1958. Experts say the law in content and context violates the fundamental human rights of persons with mental health and psychosocial disabilities.

While calling for its repeal, they said the law is inconsistent with current realities.

Series of efforts to get a new law promulgated are yet to yield the desired results.

Mr Oloriegbe, who is the chairman of Senate Committee on Health, said the bill, when passed into law, will also provide for the effective management of mental health in Nigeria and for other related matters.

But since February 2020, when a public hearing was held on the bill, there is yet no news from the red chamber.

Stakeholders in the nation’s health sector and mental health management, in particular, have blamed the various challenges faced by those suffering from mental health to the absence of relevant legislation.

The World Health Organisation has decried what it described as the global shortfall in investment in mental health.

According to the global body, a new Mental Health Atlas- a compilation of data provided by countries around the world on mental health policies, legislation, financing, human resources, availability and utilisation of services and data collection systems, “paints a disappointing picture of a worldwide failure to provide people with the mental health services they need.”

In a statement issued ahead of this year’s commemoration, WHO said the latest edition of the Atlas, “which includes data from 171 countries, provides a clear indication that the increased attention given to mental health in recent years has yet to result in a scale-up of quality mental services that is aligned with needs.”

Issued every three years, the Atlas is described as the mechanism for monitoring progress towards meeting the targets in WHO’s Comprehensive Mental Health Action Plan.

Speaking on the development, WHO’s Director-General, Tedros Ghebreyesus, said: “It is extremely concerning that, despite the evident and increasing need for mental health services, which has become even more acute during the COVID-19 pandemic, good intentions are not being met with investment.

“We must heed and act on this wake-up call and dramatically accelerate the scale-up of investment in mental health, because there is no health without mental health.”

In a video shared by WHO, a Nigerian, who identified himself simply as Toluse, narrated how the lockdown imposed during the pandemic also imposed on him clinical depression.

He said he lost interest in life and that he almost gave up before he sought help from medical experts who eventually diagnosed him with depression.

“I was an outgoing person, so to speak. But all that was stripped away, all thanks to the pandemic. At some point, I just felt that what was the usefulness or essence of living. But after much thought and dilly dally, I decided to seek help from a professional. That was when i was diagnosed with clinical depression,” Tolusi said in the video.

Speaking on the desire for a new law in Nigeria, in an interview with PREMIUM TIMES, a psychologist and hypnotherapist at the Lagos State University Teaching Hospital (LASUTH), Leonard Okonkwo, said if the new bill is passed into law, Nigerians who are mentally ill would get better treatment.

Speaking on how the Nigeria mental health sector has fared over the years, he, however said there have been little improvements.

He said: “Children who have witnessed one form of abuse or the other or were themselves abused should be taken to see a psychologist for quick intervention because if left alone, in the next 10 to 15 years we will begin to see children displaying some mental health disorders.

“Interventions should start early. After the offender may have been arrested and sentenced, the victim needs to be taken for psychological help.”

He also said that every school must have a psychologist for quick intervention.

The health expert also suggested that provision of adequate housing by the government will help in raising good children for the future of the country, saying the environment contributes significantly to mental health.

He said education has a huge role to play in mental health as most of the time people who are enlightened are not likely to fall into depression because they know when to seek help.

“Personally, what you can do to keep your sanity is to decongest yourself from the day to day pressure in the environment where you live in; eat a balanced diet because a lot of research has shown that the neurochemical substance in the brain has a role to play in one’s mental health, avoid alcohol and smoking too,” he said.

He noted that there is a strong correlation between a sedentary lifestyle and someone having a mental illness “so physical activities are good for mental health.”

“Since we spend more time in our places of work, we should endeavour to do only the job that we enjoy doing. We should make sure that we enjoy what we do and do what we enjoy. We should avoid working in an environment where once one enters, mood changes and one becomes sad,” he added.

Meanwhile, in line with the year’s theme of “Mental Health in an Unequal World,” health experts have advocated that workplace stress must be addressed, and that adolescents in schools as well as caregivers and families of people living with mental health issues must be helped.