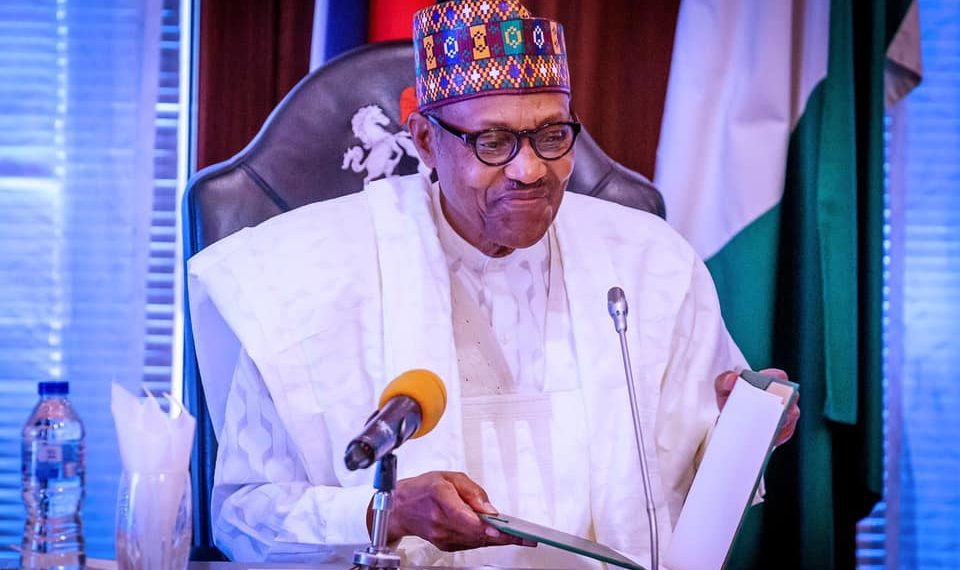 A PREMIUM TIMES examination shows the current administration has taken by far more loans than any other government since 1999, contradicting a claim by the Senate finance committee.

While the Obasanjo government met $28 billion as foreign debt in 1999, it left $2.11 billion in 2007 after successfully securing a write-off by the London and Paris clubs of foreign creditors.

The Yar’adua/Jonathan government added $1.39 billion to what they met, and the Jonathan government incurred additional $3.8 billion, taking the country’s total foreign debt to $7.3 billion when that administration came to an end in 2015.

Nigeria’s external loan reached $28.57 billion by December 2020, meaning an extra $21.27 billion had been accumulated under the Buhari administration — three times the combined amount by past governments since 1999.

For domestic debt, considered relatively less harmful to the value of Naira than foreign debt, the figure rose from N795 billion in 1999 when the Obasanjo government came to power, to N8.8 trillion in 2015 when the Buhari administration assumed office. By December 2020, Nigeria’s domestic debt stood at N16.02 trillion — twice as much the combined amount taken by the past three governments.

The domestic and foreign debt figures are higher now as the government has borrowed more in 2021.

The figures contradict a claim by the chairman of the Senate Committee on Finance, Solomon Adeola, that “three-quarter” of Nigeria’s total debt profile estimated at N33 trillion naira was incurred by past administrations dating back to the military era.

Speaking at a Senate hearing on September 22, Mr Adeola in a response to a request by the Senate president, Ahmad Lawan, to clarify concerns over the nation’s piling debt, said, “The borrowing you are saying is accumulated borrowing. It is not a borrowing of this administration alone, it is a borrowing that stems from the days of the military to the days when the Democratic dispensation started.

“It is an accumulated loan, it is not a loan that says that it is the current administration of President Buhari that has borrowed.

“It is a loan that has been borrowed by the previous administration – the Obasanjo, the Jonathan, the Yar’Adua of this world. 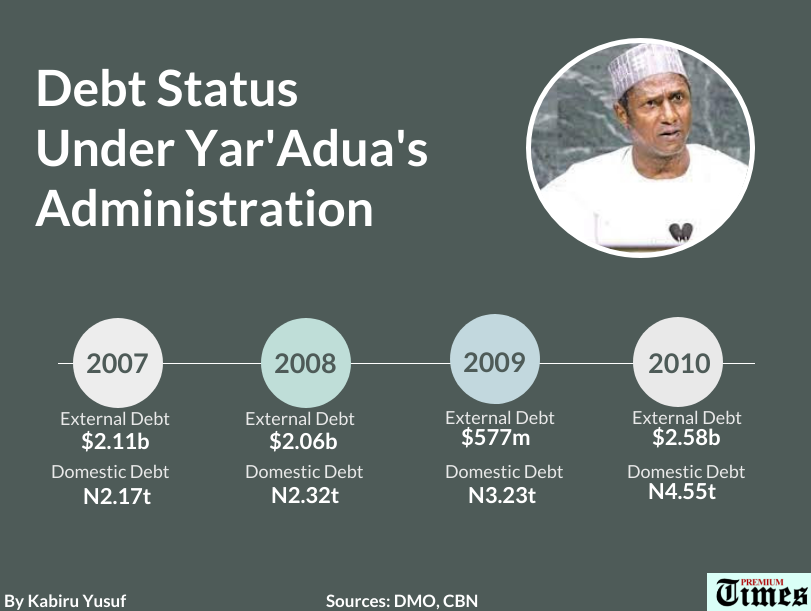 “[And] since the business of government is a continuum, the president of the day has no choice but to continue to pay back all these loans that have been borrowed by the previous administrations.

“So, when my colleague said that for every sixty-seven naira of any loan that was borrowed, we are using to pay, he should know that more than sixty naira of it are loans borrowed by previous administration. And that is where we are.”

Government figures obtained and analysed by PREMIUM TIMES do not support Mr Adeola’s “three-quarter” claim. While previous administrations borrowed as shown above, it is the present government that has taken the bulk of the domestic and foreign loans.

In 2006, Nigeria became the first African country to settle its public debt under a scheme devised to help the world’s poorest and indebted states. The country under former President Olusegun Obasanjo paid off $18 billion to secure forgiveness of the balance of its nearly $30 billion debts to the London and Paris clubs of foreign creditors. 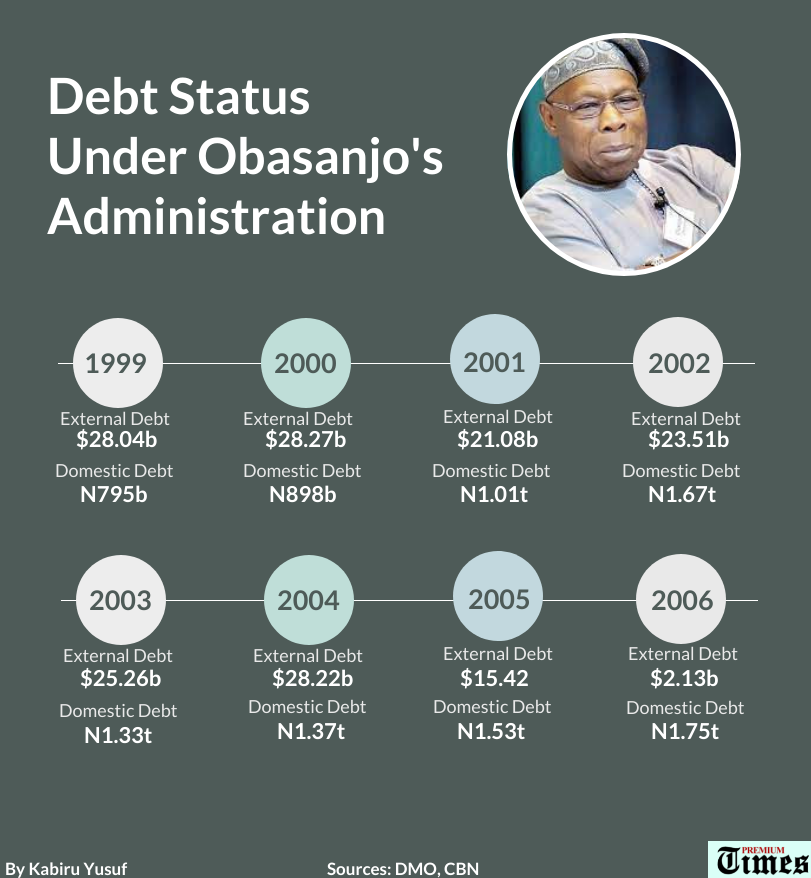 But 15 years later in 2021, Nigeria’s public debt is high again, putting pressure on the government’s revenue and performance.

A report by the World Bank placed Nigeria among the top 10 countries with the highest debt risk exposure. Nigeria is fifth with $11.7 billion debt exposure, behind India ($22 billion), Bangladesh ($18.1 billion), Pakistan ($16.4 billion), and Vietnam ($14.1 billion).

In recent periods, there has been a furore over Nigeria’s borrowing plans and debt profile. The Debt Management Office (DMO) said as of March 31, Nigeria’s total public debt stood at N33.1 trillion ($87.24 billion) — accumulated between 1999 and 2021.

The overall public debt, DMO said, is the total public debt stock which includes the external and domestic debts of the federal and state governments and the Federal Capital Territory.

Contributions By Past Governments

Records show that Nigeria’s external debt stood at $28.04 billion in 1999 when Mr Obasanjo came into office. Following the debt forgiveness, it was $2.11 billion at the time Mr Obasanjo left office in 2007.

However, while external debts declined under Mr Obasanjo, domestic debts increased from N795 billion to N2.17 trillion between 1999 to 2007.

The country’s currency exchange rate was between N98.02 and N116.8 to a dollar within the period, according to the central bank.

At the beginning of the Umaru Yar’Adua/Goodluck Jonathan administration, Nigeria’s domestic debt stood at N2.17 trillion but jumped to N5. 62 trillion at the end of their administration in 2011. External debt also moved from $2.11 billion to $3.5 billion within the period under review. 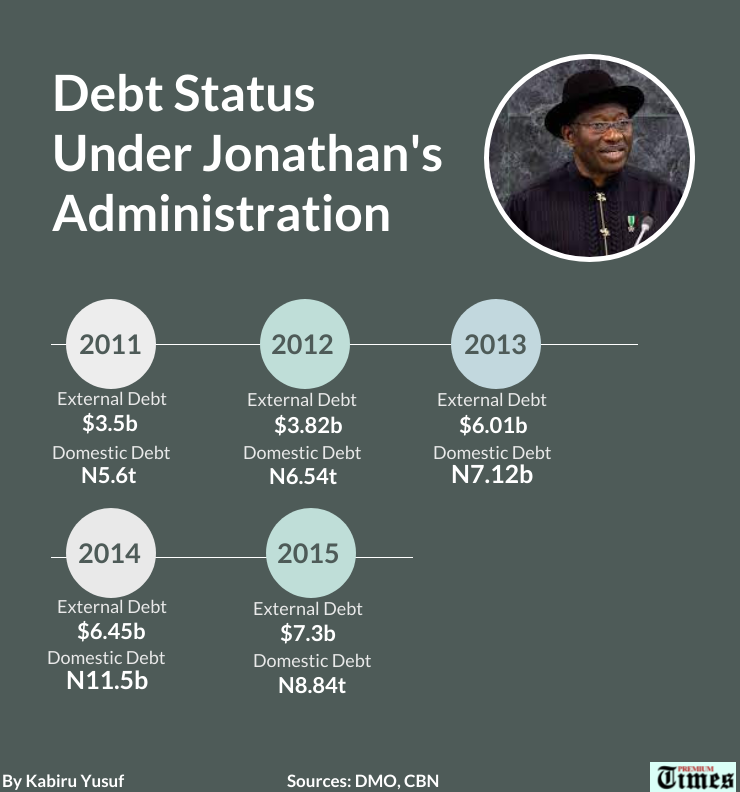 In effect, the debt stock moved from N2.42 trillion to N6.17 trillion in four years, representing an average of N930 billion borrowing per year. The nation’s exchange rate also fell from N116.8/$1 to N156.7/$1 during the period, according to CBN.

It is important to note that Mr Jonathan completed the tenure from May 2010 to May 2011 after the death of Mr Yar’Adua. The 12 month period saw an increase in the federal government’s debt from N4.94 trillion to N6.17 trillion.

In the same vein, the country’s domestic debt climbed from N5.62 trillion to N8.8 billion.

Nigeria’s combined debt figure under Mr Jonathan administration went from N6.17 trillion in 2011 to N9.8 trillion in 2015. This represents a N3.63 trillion increase or an average of N900 billion loan in a year.

The country’s official exchange rate also stood at N197/$1 during the period under review.

Incumbent President Muhammadu Buhari inherited an N8.8 trillion federal government’s domestic debt in 2015. However, the figure rose to N16.02 trillion as of December 2020.

But putting together external and domestic borrowing, Mr Buhari had borrowed N17.06 trillion as of March 2021, using the N381 exchange rate. This represents an average of N2.83 trillion per year since 2015. 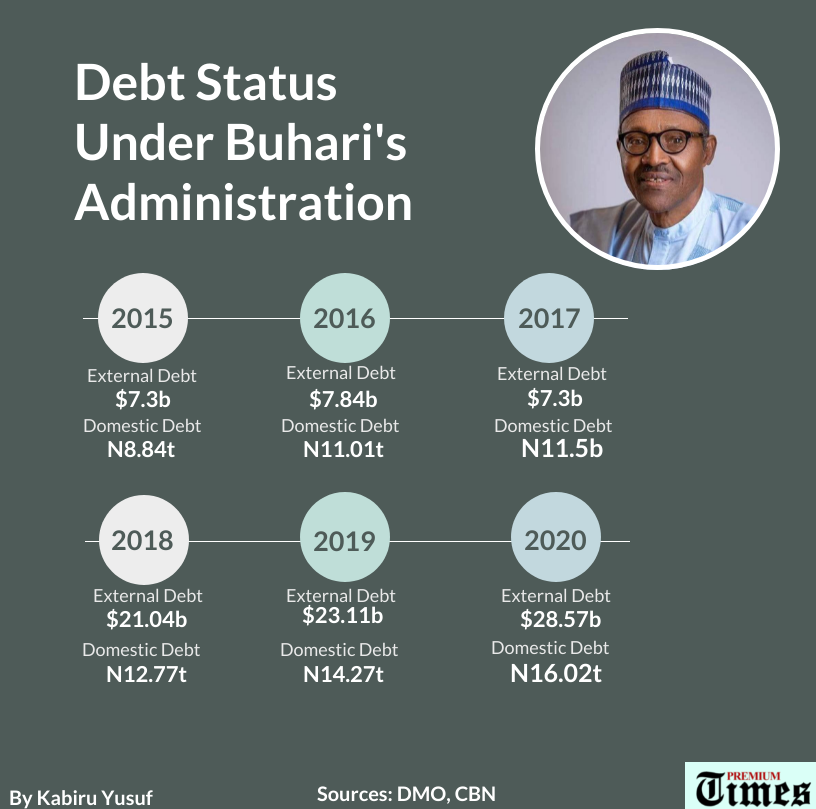 Debt service obligations gulped 97 per cent of the Nigerian government’s total revenue in 2020, according to Budgit, a civic-tech non-profit organisation. Of the N3.42 trillion generated as revenue, Nigeria spent N3.34 trillion in debt servicing, Budgit said in a July report.

Also, N3.3 trillion was set aside for debt servicing in the assented 2021 budget, about a quarter (24.3 per cent) of the entire N13.6 trillion total expenditure.

This trend has been in place since 2016.

In 2016, the country spent almost a quarter (about 24 per cent) of its budget to service debts. Of the N6.6 trillion budgeted for 2016, the government earmarked N1.5 trillion for debt financing.

The sum of N1.6 trillion was proposed for servicing debts out of the total (N7.3 trillion) budgeted for 2017.

In 2019, the government proposed to spend 24 per cent (N2.14 trillion) of the N8.9 trillion expenditure on debt service.

In mid-September, Mr Buhari sought the approval of the Senate to borrow $4 billion (4,054,476,863) and €710 million loan from bilateral and multilateral organisations to fund the deficit in the 2021 budget.

The president said the loan request is an addendum to the 2018-2020 borrowing plan and that the new borrowing is to meet “emerging needs” for some “critical projects.”

In July, the National Assembly had approved Mr Buhari’s request to borrow $8.3 billion and €490 million loans contained in the initial 2018-2020 borrowing plan.

Economic analyst, Tope Fasua, said Nigeria’s loan is already unsustainable because it is taking 95 to 97 per cent of revenue generated. “That ratio is not sustainable,” he said.

The huge amount the Nigerian government is borrowing mostly is “to cater for a lot of failures and they just borrow to keep some activities going,” the economist said. “How the loans are going to be paid is not in question for them and that’s very unfortunate.

“Only 30 per cent value for money is what we get especially on these loans, some of what we are taking are for very frivolous issues,” he said.

“In my opinion, we should take loans only for projects that have the ability to pay themselves back. If a project is not generating cash flow, it shouldn’t be taken.

“If we are taking loans for local roads and schools, who is going to pay? These are projects that should be funded from internally generated revenue.”

He also attributed the currency challenges to Nigeria’s debt portfolio.

“We have a challenge with the naira presently, and one of the key things that throws your currency off is debt unsustainability.

“And mind you, most of the loans we are taking in recent times have not fallen due for payment, what we are doing is only paying the interest. Many of them have moratoriums on interest payments.

“These guys have actually booked for us a bad time and a lot of trouble upfront,” he said.

Samuel Bamidele, Head of Research and Intelligence at Phillips Consulting Limited said although Nigeria’s debt remained within the IMF recommended range with respect to GDP, the country faces a challenge when its debt stock is compared to its revenue. He also worried about how the government was using the borrowed funds.

“Nigeria’s debt stock at 33% of GDP is sustainable at that level, but the issue is more around servicing the debt,” he said. “When your debt stock is above 40 per cent, according to the IMF Debt Sustainability Framework (DSF), it means that it’s no longer sustainable,” Mr Bamidele said.

“So you can say that Nigeria’s debt profile is sustainable at the current level but the problem is the revenue. Because when your revenue is low you will need more money in terms of borrowing to finance both capital and recurrent projects.

“Conversation around our debt should be more geared towards how we are channeling the debt we are borrowing in terms of efficiency and proper allocation. The danger here is we are not sufficiently channeling what we are borrowing on productive capacity and infrastructure, instead we borrow to finance more of recurrent spending.”

ANALYSIS: Beyond attacks on Atiku’s convoy, his supporters