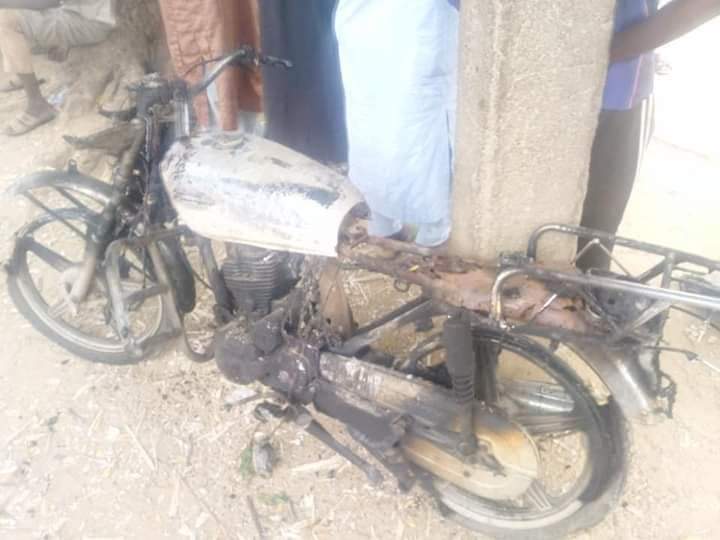 Scene of wreckage left by the bandits

Bandits kill 10, wound many others in fresh Katsina attack – Residents

"They came around Magrib prayers on more than 20 motorcycles," a resident says.

Armed bandits on Tuesday morning killed 10 people and injured several others in an attack during which they also burnt shops and houses in Yasore community in Katsina State, residents have told PREMIUM TIMES.

Yasore is less than two kilometres from Batsari, the headquarter of the local government area by the same name.

Batsari is among the LGAs witnessing incessant bandits’ attacks in Katsina. It shares boundaries with Rugu forest, Jibia local government in Katsina and Zurmi in Zamfara State.

The state government has cut mobile telecommunications network in Batsari and 13 other local government areas in the state as part of efforts to tackle insecurity.

A resident of the area, Harisu Hamza, told PREMIUM TIMES newspaper that the attackers came on motorcycles and started shooting sporadically.

“They came around Magrib prayers. Some people had concluded prayers by then. They rode on more than 20 motorcycles. It was during the sporadically shooting that they killed 10 people and wounded others,” he said.

He added that they left some minutes after 10 a.m. when a combined team of the police, vigilantes and soldiers arrived at the community.

Mr Hamza, who has been living in Katsina metropolis, confirmed that the bandits also set houses and shops ablaze.

“They carted away food commodities and other things they needed during the attack,” he said.

PREMIUM TIMES gathered that some of the wounded have been admitted at the general hospital in Katsina.

The police spokesperson in the state, Gambo Isa, said he was in a meeting when this reporter called him. He, however, did not respond to SMS sent to him.