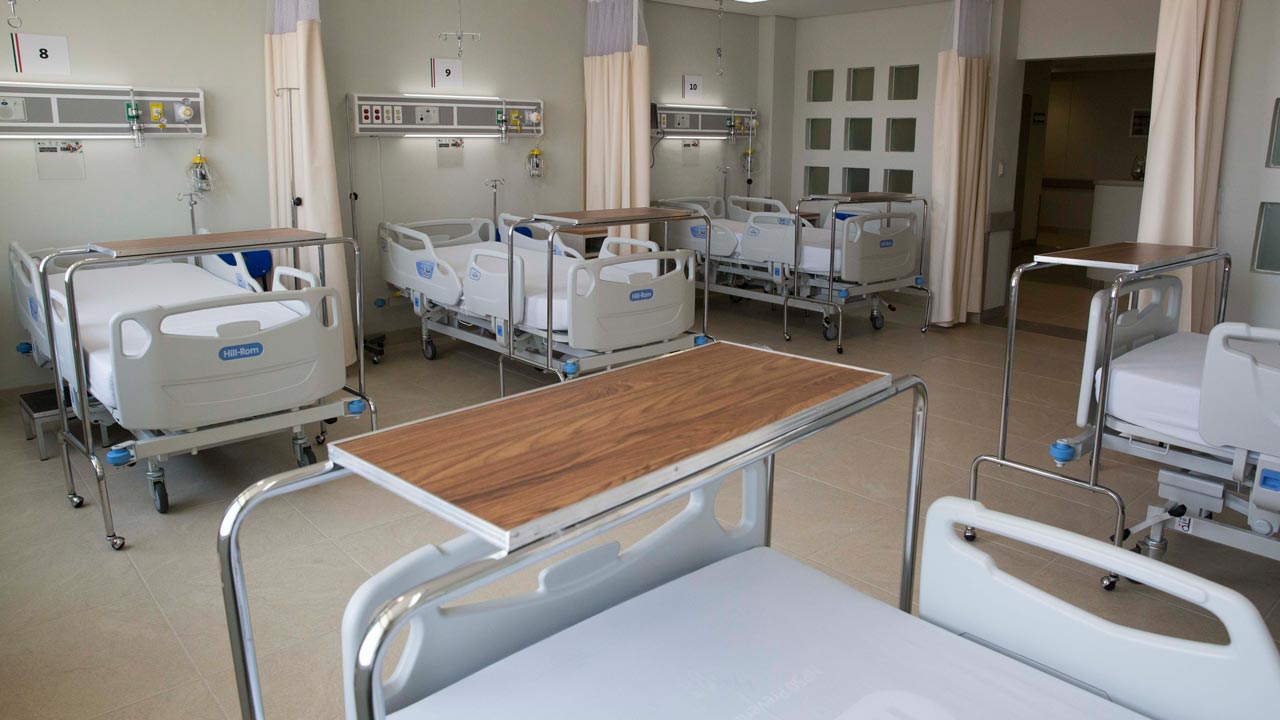 As witnessed by our reporters, most of the wards visited were empty of patients as nurses and health attendants on duty chatted away.

From Lagos to Uyo, Abuja to Abeokuta, and indeed, the whole of Nigerian cities and towns where major tertiary hospitals are sited, it is the story of pain and pangs for patients who could not access urgent medical care due to the ongoing industrial action by the Nigerian doctors.

In Uyo, Akwa Ibom State capital, for instance, the chairman of NARD chapter in the state, Ekemini Udo, said his union has about 260 members constituting roughly 75 per cent of the doctors’ workforce at the University of Uyo teaching hospital.

“We have over 260 resident doctors in Akwa Ibom state and these people are not working. The hospital is only left with the consultants, who constitute only 25 per cent and they cannot work alone because there is an extent to what they can do,” Mr Udo told PREMIUM TIMES.

This is happening amidst the rising cases of coronavirus-related fatalities and new infections being recorded nationwide. Yet, there seems to be no end in sight to the strike as both the striking doctors and the federal government are locking horns in a legal battle over issues of due processes and rights.

The two sides have also given different interpretations to the order of an industrial court at the Federal Capital Territory on Monday, which instructed the feuding parties “to suspend all forms of hostilities and maintain status quo.”

While the government is insisting that the status quo implies the suspension of the strike, the doctors, who said they were not even aware that the court was sitting on the matter, have interpreted the order to mean continuation of their action pending the final resolution of the matter.

At the Lagos State University Teaching Hospital (LASUTH), Maurice Eke, a prostate cancer patient, was having difficulty with his catheter on Monday.

Mr Eke, who was writhing in severe pain, said he was supposed to return to the hospital on Wednesday to change the fluid removal tube but the pain couldn’t allow him to wait. 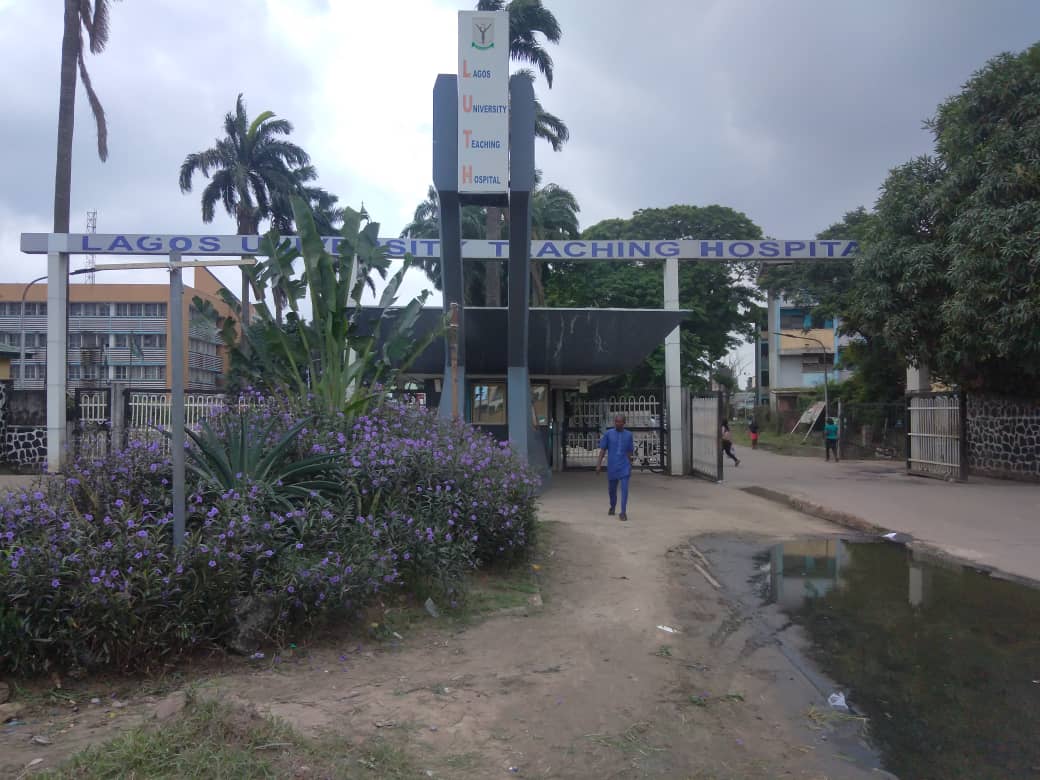 Unfortunately, there was no doctor to attend to the patient on Monday. Not even the severity of his pain could arouse the pity of a few consultants on duty at the surgical outpatient department where he was awaiting a helping hand.

“Now the nurses have told me that even if they would take my case to any consultant for a quick help, they could not trace where the resident doctors who had been in charge of my folder kept it. They said they have been taking it around, and now that they are on strike, they couldn’t find it,” Mr Eke told PREMIUM TIMES’ reporter.

Meanwhile, in the same hospital, a nurse at the antenatal clinic, who pleaded anonymity, said they could not even take deliveries at the facility because doctors were not on ground.

“The only delivery we took was just because the woman was a doctor, and it was even a risk. A woman in labour was once here with four centimetre dilation but we had to refer her to a general hospital,” the nurse said.

As witnessed by our reporters, most of the wards visited were empty of patients as nurses and health attendants on duty chatted away.

She said apart from the ongoing strike leading to more casualties, “those who could survive the strike would return with various degrees of complications when the strike is over.” 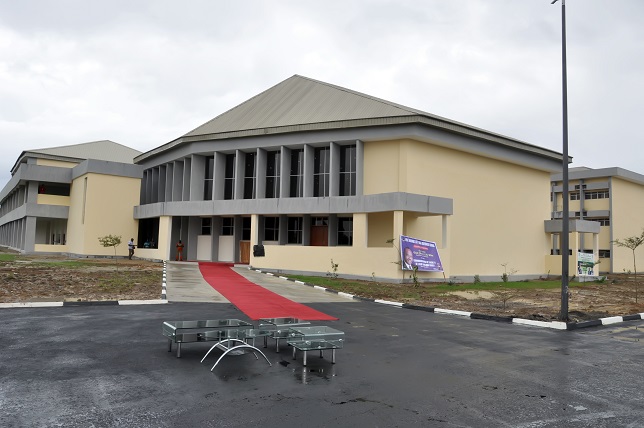 But a lucky patient, who identified himself as Mr Kingsley, and was sitting at the waiting bay opposite the medical emergency centre at the hospital, said he had been attended to by a consultant.

“I came on an appointment and a consultant has attended to me. I’m only here waiting for the driver that will take me home,” Mr Kingsley said.

At the UNIUYO teaching hospital, a patient, Emmanuel Okon, said he was asked to obtain a card by a nurse but as soon as he did that, he said the nurses said there was no doctor to attend to him.

On his part, Akpan Effiong, who was visibly anguished, complained of pain in his anus but could not receive care on time.

PREMIUM TIMES spoke with a medical consultant, Kevin Bassey, who confirmed that they could only do little as a result of the strike.

“Most of the doctors in the teaching hospitals are either resident doctors or house officers. The consultants are fewer so it is very challenging. So because of the strike, we can’t take the same number of patients and the same load of work,” he said.

A patient, who identified himself simply as Adeolu, has been visiting the federal medical centre, Idi Aba, Abeokuta, Ogun State capital, for about a week without seeing a doctor.

He lamented the stress he had been going through, saying the cause of his persistent chest pain could not be determined yet.

On Monday, when visited by our reporter, a usually boisterous hospital was as silent as a graveyard, even as major units including the pharmacy, accident and emergency complex, and dialysis centre were all under lock and key.

A civil servant, who craved anonymity, also said her unnamed daughter, an asthma patient, was almost lost to the strike but for the intervention at a private hospital.

Meanwhile, during a visit by our reporter to the hospital, it was observed that most of the wards were practically empty.

Wards such as accident and emergency, orthopedic, maternity, male and female medical and surgical wards were empty, while the general outpatient department (GOPD) had a few patients waiting to see a few consultants on duty.

At the male surgical ward, only a man identified simply as Seriki was on admission after an eye surgery. 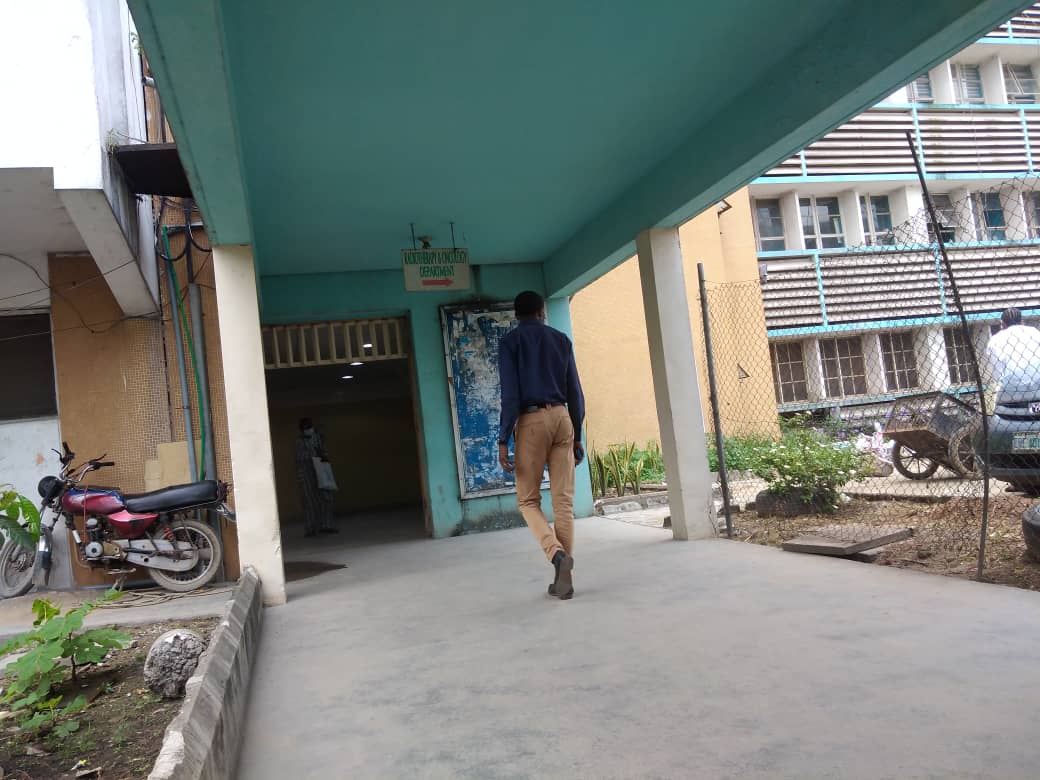 At the emergency centre, a nurse who has T.O Ogunsola on her name tag, told this reporter that the emergency ward no longer admits patients, saying only cases that could be managed and discharged on the spot are taken.

She said: “We attend to people, but because of the strike, we don’t admit them, they leave immediately.”

But the hospital management said the consultants under the umbrella of the hospital’s branch of the Medical and Dental Consultants Association of Nigeria (MDCAN) and corps members are helping out.

The hospital’s spokesperson, Segun Oritsajo, said the hospital is running.

At the general hospital in Kubwa, a satellite town of Abuja, Nigeria’s capital, Favor Agbor was in pain outside the facility’s emergency ward on Monday.

Ms Agbor, 27, and a resident of Dutse, a rural community also in the FCT, said she was bitten by a snake and needed emergency attention.

But for more than two hours, she said there was no one to attend to her, until “I almost passed out.”

A taxi-driver, John Ovei, who said he brought in an accident victim, also complained of delays at the emergency centre.

“As you can see, beds are empty here. Most of the patients are being discharged and we only receive very few special cases as the hospitals’ manpower have drastically reduced as a result of the strike,” said, a health official who craved anonymity, said.

There were, at least, about 12 patients outside the maternal unit waiting to be attended to.

Meanwhile, the medical director of the facility, Lasisi Muideen, admitted that the hospital prioritises emergency services due to shortage of hands since the strike began.

Mr Muideen said the hospital has put strategic plans in place to avoid total system breakdown during the period of the strike.

Also at the federal medical centre, Jabi, FCT, the strike continues to take its toll on the facility as the management faces the challenge of meeting the financial requirements of the striking doctors.

Activities were on in some units in the hospital on Monday with the LOCUM staff in place. But there were still delays in services as patients wait for long hours to be attended to.

Michael Ibe, a patient who was sitting in front of the eye clinic, said it was his third visit to the hospital since last week for treatment after he lawn tennis ball hit him in the eye.

“The services here have been so slow. This is the third time I am coming here. It’s even this morning that I learnt that some doctors are on strike. After this, I think I will just have to start going to a private clinic”, he said.

Some patients at the orthopedic department also said there have been delays in services.

Charity Ekum, whose son had a fractured arm while playing with his peers in their neighborhood, complained of long waiting hours on Monday morning.

“They only gave my son first aid treatment in the morning and said we should wait for the doctor that will run full checks on him to arrive. We can no longer wait. My husband is on the way to take us to a private clinic,” she said.

At the national orthopaedic hospital, Igbobi, the striking doctors’ union has a task force that moves around the various units to check on their members who may flout the rule.

A security official, who declined to provide identity, confirmed the development to our reporter on Monday.

“They have not been admitting patients. Where is the doctor to receive them? Most patients that were on admission were discharged. 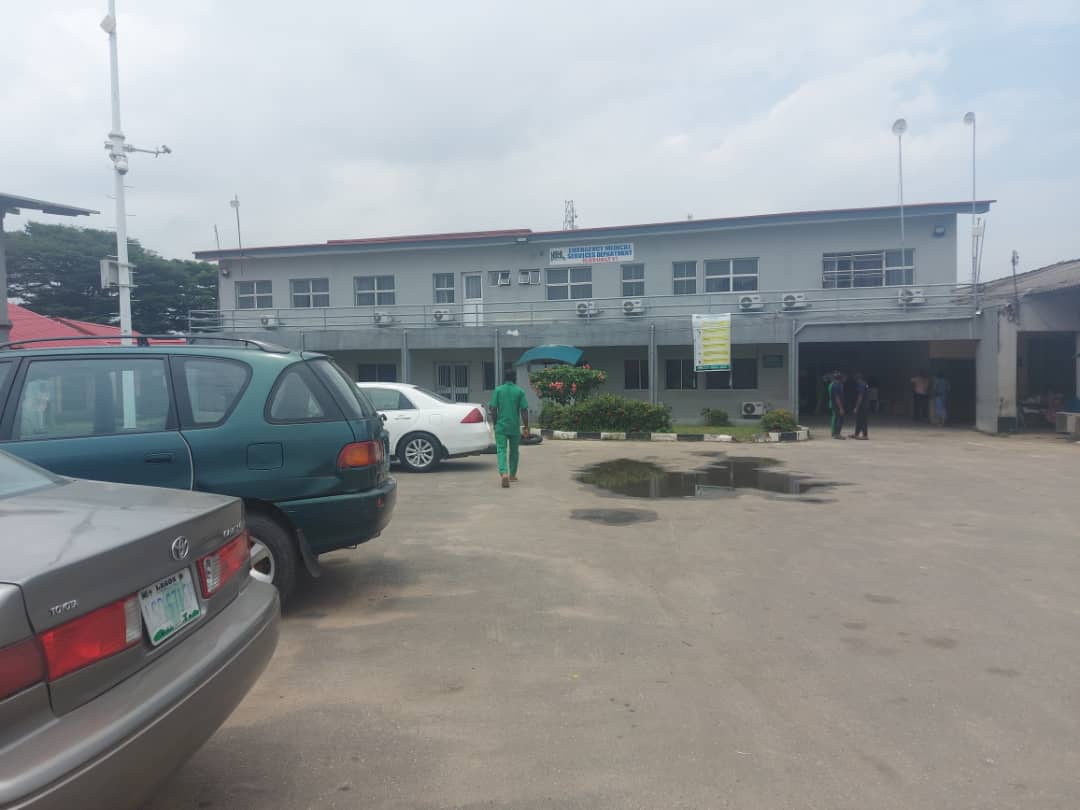 “This female ward takes up to 26 patients but there are only 4 people there now. This one here where I am standing always contains between 21 and 22 people, but now only five people are there,” the security personnel said.

The source added that the doctors’ absence can be felt even at the car parks. “If you check their (doctors’) car park, no single car is there. Only nurses are around and no one is taking new patients.”

At the Federal Medical Centre in Ebute-Metta, Lagos, one of the two patients met at the entrance of the general outpatient clinic said she had been around since 9a.m but was told that only one doctor was on duty.

“They said I needed to be here as early as 6a.m to pick a number. But the only doctor did not come until 12 noon. Does that sound well? It is 2p.m and I don’t have a number yet, not to talk of seeing a doctor.

“We learnt that they will close by 3 or 4 pm. The people we met are still there (upstairs). Some of the people working in the hospital said it is not certain that they will attend to all of us today,” the patient who refused to give her identity, said.

Meanwhile, at the Lagos University Teaching Hospital, some of the patients at the outpatient department said they were being attended to.

A young man, who identified himself as Akin, said he accompanied his father to the hospital.

“And my father was able to see the radiologist we came for,” Mr Akin said.

Lai Mohammed: Limits of propaganda in a technology age, By Bámidélé Adémólá-Olátéjú