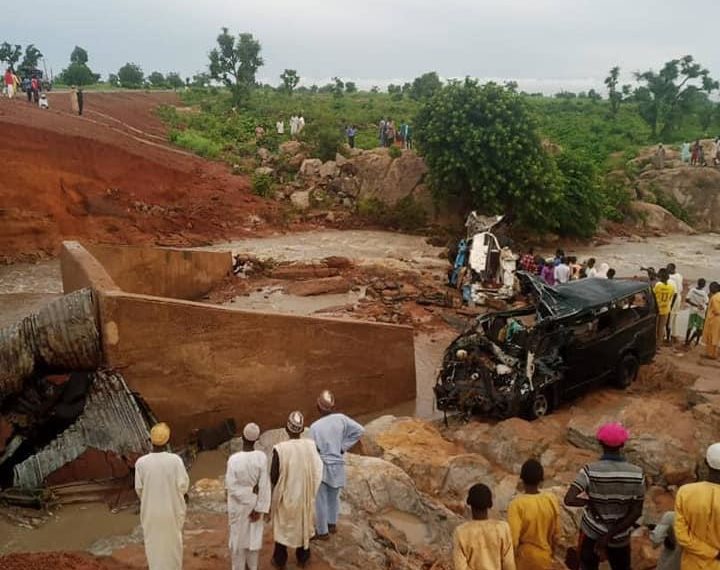 Photo of the scene of the accident

At least 21 persons, including 11 disqualified military recruitment applicants, died on Sunday after a bridge collapsed in Gwaram Local Government Area of Jigawa State.

Residents said the bridge collapsed under a heavy flood.

The chairperson, Jigawa Civil Society Forum, Musbahu Basirka, told PREMIUM TIMES that the victims were travelling in a Hummer commuter bus from Kano to Adamawa State when the incident happened.

Mr Basirka said the bridge on the Gwaram-Basirka road collapsed and killed the 21 persons, including a teenage girl ,but one of the recruits survived with a leg fracture.

PREMIUM TIMES had reported on August 6 how the Jigawa State Government announced a diversion of traffic from the highway linking the state and Kano with North-east Nigeria over concerns over the state of another major bridge following heavy downpours.

The state government had urged commuters to use alternative routes to allow work on the bridge. However, the bridge marked for the work was not the one affected in the Sunday collapse.

The police spokesperson in Jigawa, Lawan Adam, said the police responded to a distress call following the incident.

“It involved One Hummer bus with reg no. FYK 406 ZA Gombe State conveying 18 passengers from Kano State to Adamawa State and a Canter lorry reg no. not found, conveying 3 passengers destination not known yet, fell into broken culvert full of water.

“Victims were evacuated to Basirka Hospital. 21 passengers have been confirmed dead by medical doctor while one Simon Chinapi ‘M’aged 26 yrs of Mubi Adamawa State survived the accident.

“Commissioner of Police Jigawa State Police Command, CP Aliyu S Tafida, psc in accompanied of AC_Ops, DPO, Gwaram and other officers have visited the scene and directed prompt and discrete investigation into the incident,” the police spokesperson said.