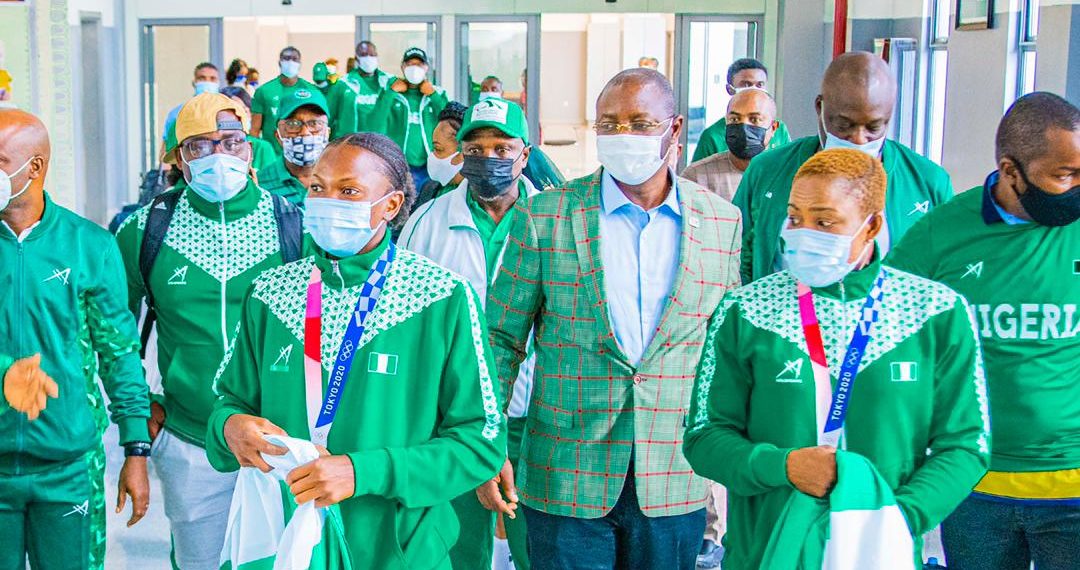 Africa’s total haul of 11 gold, 12 silver, and 14 bronze medals is less than Australia’s haul at the Tokyo Olympics.

The recently concluded Tokyo 2020 Olympics indicates how much Africa lags behind other continents in sports.

At the opening ceremony, it was a great delight seeing top singers from around the world performing. This stellar cast included John Legend and Keith Urban, who performed “Imagine.” The song, co-written by John Lennon and Yoko Ono 50 years ago, played while a giant Earth made of drones rotated above the Olympic stadium.

In that sweet beginning, all the continents stood as equals, heralding the greatest gathering of athletes. But when the competition closed on Sunday, August 8, the status had changed as depicted by the medals’ table.

While the musicians equally shared the stage to serenade the world, the final medals table was not a sonorous one, especially for Africa.

The standings highlighted once more the huge gap between Africa and the other continents in terms of their overall sporting prowess.

This is a sad reality for the continent that boasts of the second-highest population, only behind Asia, and also has an abundance of raw talents which, if well-harnessed, can become world-beaters and, of course, Olympic medalists.

While all the other continents had occupants from the 1st to the 12th positions on the medals table, the top African team, Kenya, came in a distant 19th position.

There were 205 participating countries at the Tokyo Olympics, and 52 were from Africa.

At the end, only seven countries from Africa had their National Anthems played in Tokyo, having won gold medals in various events

Kenya and fellow East African neighbours Uganda and Ethiopia won more than half of the total gold medals won by Africa as they jointly won seven gold medals across different events; especially the long-distance races where they have carved a niche.

The North Africans also had a memorable outing in Tokyo, where they snagged three gold medals.

Tunisian Swimmer Hafnaoui, 18, shocked the world to win the 400m freestyle ahead of favourites Jack McLoughlin of Australia and the US’s Kieran Smith.

Also, Soufiane El Bakkali gave Morocco its first gold in the 3,000m steeplechase, clocking in at 8:08:90.

Like Morocco, Egypt ended their 17-year wait for another Olympic gold after Karateka Feryel Abdelaziz clinched a gold medal in the women’s +61kg Kumite event.

Unfortunately, West Africa had no golden moment in Tokyo, with Nigeria leading the region with a silver and a bronze medal.

Cote d’Ivoire, Ghana, and Burkina Faso all had a bronze medal each to show for their efforts in Tokyo.

Africa’s biggest bane at the Olympics is that the countries from the continent compete in very few events, unlike the Europeans and Americans.

Logically, it is outrightly impossible to get many medals when you are not even competing for them.

Australia, which won more medals than all the African countries put together, competed in many of the events.

They went to Tokyo with a strong team of 482 athletes that took part in all but five of the 46 different sports available. There is no need to think too far for the reason for their fifth position or why their total medals haul outweighs that of the entire African continent.

South Africa, which her 176 participants in 23 different sports, were Africa’s largest in Tokyo and the largest ever for the country.

Sadly, the Rainbow Nation had just one gold and two silver medals to show for the ‘crowd’ they took to Tokyo. The Tokyo Olympics was the worst outing since 2008 for South Africa

Egypt had the second-largest contingent from Africa with 139 athletes (in 27 sports) including a team each in football and handball. They left the games with 6 medals, including one gold.

Despite having Africa’s largest population, Nigeria took part with 53 participants and left the games with a silver and a bronze.

Team Nigeria took part in 10 sports, including male and female basketball teams, where both teams lost all their group games.

Africa’s most successful team in the history of the Olympics and in Tokyo is Kenya, and they went to the 2020 Olympic Games with a team of 87 athletes including two team events – the men’s and women’s Rugby Sevens and a beach volleyball team.

Until African countries step out of their comfort zone to challenge in more varieties of sports, they may continue to have this kind of show in subsequent editions of the Olympics.

The official Tokyo 2020 website listed 46 sporting categories in this year’s games. After Athletics, Swimming is the next biggest medal-winning category at the Olympic Games.

There are 37 gold medals to be won in swimming. With the silver and bronze also on the cards, it makes it a whopping 111 medals to be contested for in the event.

Sadly, African countries are not powerhouses in swimming, and in Tokyo, they only managed to win two of the gold medals up for grabs.

Though not fielding athletes for a wide variety of events appears to be an undermining issue, experts believe there is more to worry about for Nigeria and indeed the continent.

Nnamdi Okosieme, a veteran sports journalist and consultant, said poor planning, poor organisation, corruption, and not playing up to the continent’s strength, are monsters militating against Africa; especially Nigeria

“The first reason Nigeria and the rest of Africa are playing catch up is that we have not gotten it right in terms of planning and organisation like these developed countries,” Mr Okoiseme told PREMIUM TIMES.

“I remember one story an Australian told us about how they nurtured I think a five year or 11-year-old to become a world champion in gymnastics. Australia is not a powerful country in gymnastics, but with proper planning and organisation, they purposefully built a champion from scratch. Most African countries are not organised enough to achieve such feats,” Mr Okosieme noted.

He also highlighted how corrupt officials have shortchanged their countries and the continent at large just because they want to line their pockets with monies that could have aided sports development.

“You saw the disqualification of 10 Nigerian athletes and the PUMA or no PUMA kit issue that rocked Team Nigeria in Tokyo; this is bound to have adverse effects,” Mr Okosieme said.

On playing to its strength, Mr Okosieme argued there is no reason Nigeria especially should not be challenging for honours in multi-medal events like swimming, wrestling, and even weightlifting.

“There are raw, talented swimmers in our riverine areas. We also have the capacity to do well in wrestling and weightlifting as we have seen in the past. We need to invest more resources in the discovery and nurturing of the talents we have,” he concluded.

For Wale Balogun, an ex-athlete turned coach, the major thing needed to be done is to allow experts to run sports as obtained in those developed and thriving climes.

“Sports has gone scientific and you need to allow those that have the capability and education to run the show. As long as we keep recycling old hands and fail to give those with the knowledge the chance to take the centre stage, we will keep moving in circles,” the coach told PREMIUM TIMES.

“Paris 2024 is not far anymore. If we keep doing the same thing, then we should expect nothing different,” Mr Balogun said.

Weather report across Nigeria from Sunday to Tuesday – NiMet