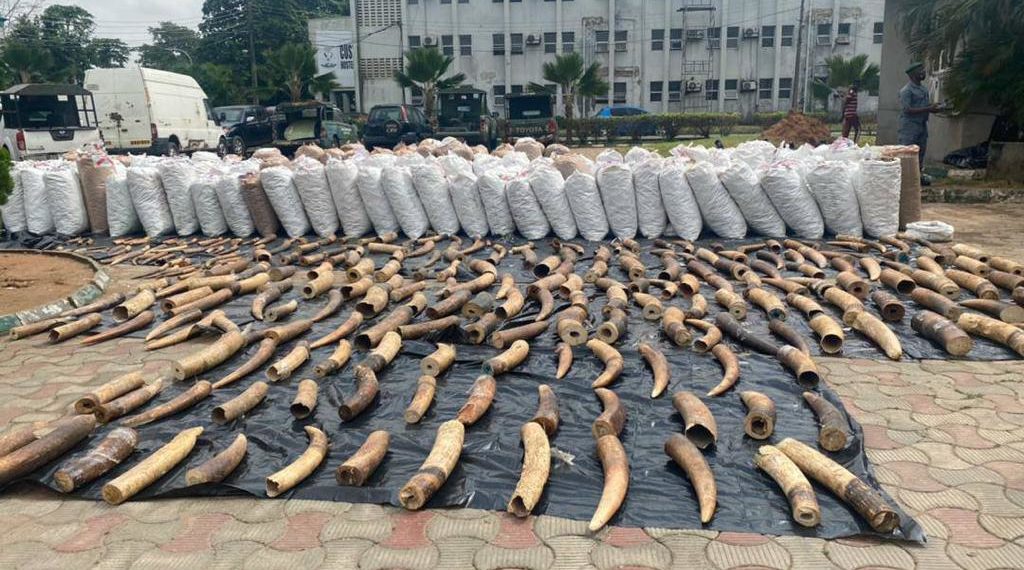 The Nigeria Customs Service has arrested three suspected high-level traffickers with 7.1 tonnes of pangolin scales and 846 kg of ivory seized.

This was disclosed in a statement issued by Isabel Leal of the Wildlife Justice Commission, and confirmed to this newspaper by Joseph Attah, Nigeria’s Customs Service Public Relations Officer.

It said all wildlife products recovered are destined for export, and that additional suspects are being sought in respect to the seizure, while some are believed to have already fled Nigeria.

The statement noted that the arrested suspects are part of a well-known transnational criminal network operating in West Africa who are linked to approximately 50 per cent of all major pangolin scale seizures over the past three years.

“These arrests have severely disrupted this network.This is the ninth largest seizure of pangolin scales in the last three years (2019-2021),” it said.

Pangolin is a solitary anteater resembling an artichoke and is the world’s most trafficked mammal. The animal is prized for its scales which are majorly used for traditional medicine in China.

The all round scaly-quiet animal is at the centre of a sophisticated, multi-million-dollar supply chain across Africa and Asia, run by networks of criminal syndicates.

However, the large-scale and sustained trafficking of pangolin scales, sourced for jewellery and as a component of traditional Chinese medicine, is driving the species to the brink of extinction.

The official stated that the truly horrific reality of this seizure is that even at seven tonnes, there were still eight other larger seizures in the last three years, and this network was responsible for at least half of them.

“We look forward to the arrest of the other wanted subjects and seeing proceeds of crime provisions applied to seize the ill-gotten gains of this network,” he said.

During 2020, Ms Leal noted that Wildlife Justice Commission investigators were offered staggering quantities of pangolin scales, outnumbering the offers of ivory across all the organisation’s investigations for the first time.

This, it said demonstrates the continued availability of pangolin scales and ongoing marketplace demand, despite COVID-19 travelling restrictions.

The organisation explained that it had also identified that wildlife traders were stockpiling their products in order to resume trade as soon as restrictions were eased, a concern that has now been justified by seizures of massive amounts of pangolin scales such as this one.

The Wildlife Justice Commission had pointed out in recent reports that pangolin scales are increasingly substituted for, and trafficked alongside, ivory, a trend that the organisation already identified in 2019, the statement noted.

“As ivory prices fall, traffickers are increasingly turning to pangolin scales; in combined shipments, the proportion of pangolin scales has surpassed the volume of ivory,” it said.

Mr Carmody explained further that the recent cessation is a great example of how transnational wildlife crimes should be investigated and the tangible results that public-private partnerships can achieve by working together to disrupt organised crime.

“This operation is a major victory for law enforcement and for the Wildlife Justice Commission, but we must acknowledge that other actors will rise to take the place of those recently arrested,” said Carmody.

He said the Commission under his watch will use the evidence gathered through this arrest to continue investigations into the trafficking of endangered wildlife and support the efforts of law enforcement agencies fighting wildlife crime.

“It takes a network to defeat a network,” he added.

Since it was established in 2015, the Wildlife Justice Commission has facilitated the arrest of 151 wildlife traffickers and the dismantling of 35 criminal networks.

The wildlife products seized during this operation represent the largest quantity of pangolin scales and second largest seizure of ivory ever facilitated by the organisation. Nigerian authorities have intercepted a total of 25.4 tonnes of pangolin scales between January 9,2020 till date.