The vaccines, which were delivered through the COVAX facility, had earlier arrived in Abuja, Nigeria’s capital city, around 2:15 a.m. on Sunday.

The Nigerian government on Monday received four million and eighty doses of the Moderna COVID-19 vaccine donated by the Biden-Harris administration of the United States of America.

The vaccines, which were delivered through the COVAX facility, a vaccine alliance aimed at ensuring equitable distribution of vaccines globally, had earlier arrived in Abuja, Nigeria’s capital city, around 2:15 a.m. on Sunday.

The vaccines were received and stored at the country’s National Strategic Cold Store near the Nnamdi Azikiwe International Airport in Abuja. 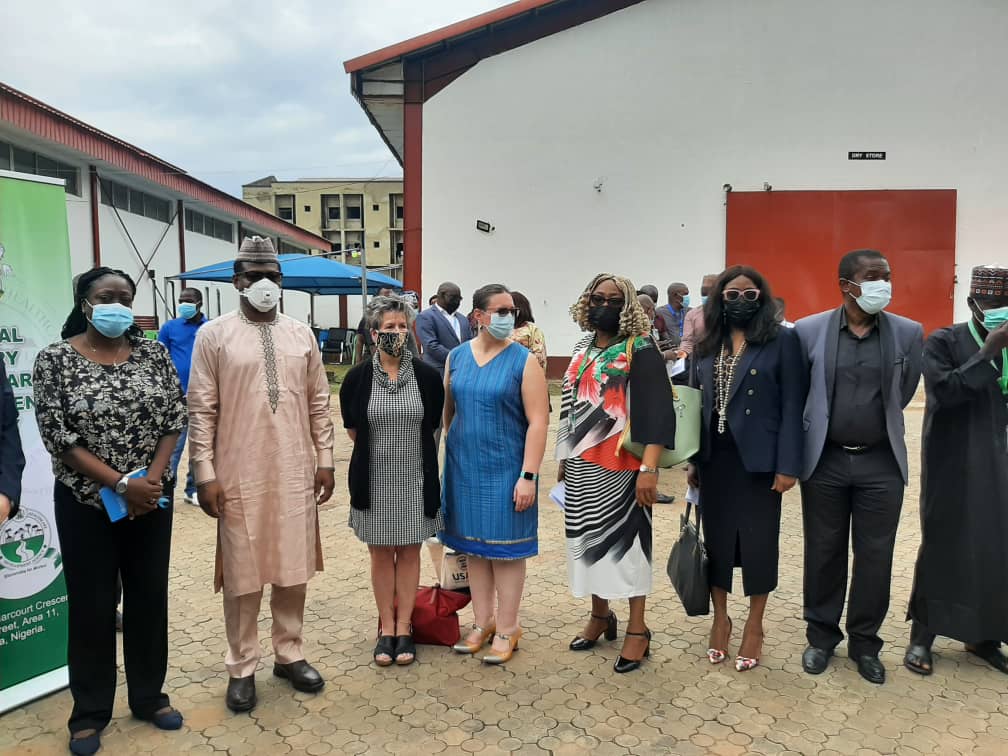 The President of the United States, Joe Biden, had in May, pledged to share 80 million vaccines produced in the U.S with countries around the world to protect the most vulnerable and stem transmission of the coronavirus.

Of these 80 million, Africa is expected to receive 25 million, with the first shipments to Burkina Faso, Djibouti, and Ethiopia which had already been delivered.

While addressing the media on Monday morning in Abuja, the executive director and chief executive officer of Nigeria’s National Primary Health Care Development Agency (NPHCDA), Faisal Shuaib, said the Presidential Steering Committee on COVID-19, had, ahead of the arrival of the vaccines, purchased 60 ultra-cold chain equipment and have since allocated one to each of the 36 states. 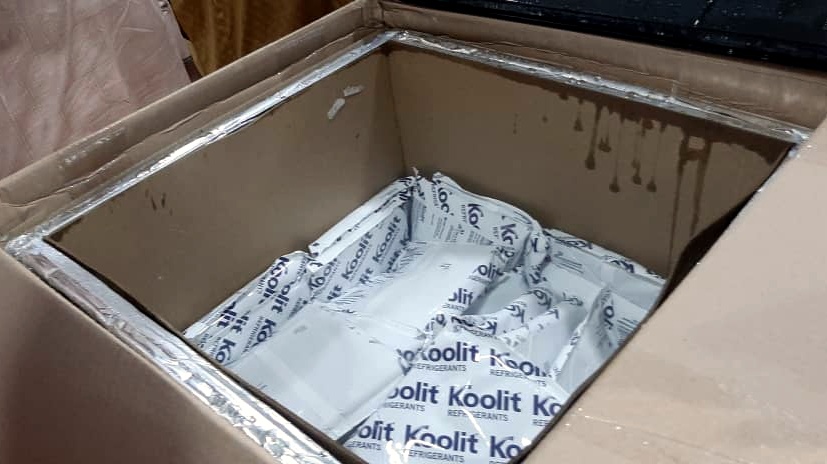 According to Gayle Smith, the State Department’s coordinator for COVID-19 recovery and global health in the U.S, the 25 million vaccines were donated to 49 African countries in partnership with the African Union and COVAX.

He added that the Biden administration is committed to leading the global response to the pandemic by providing safe and effective vaccines to the world.

While responding to questions on whether those who took the first dose of the Oxford Astrazeneca vaccines could take from the Moderna types just received, Mr Shuaib said; “That is not the recommendation of the WHO and that is not what we are going to be doing in Nigeria. For those who have taken the first dose of Astrazeneca, we are expecting in a week or so additional consignment of Astrazeneca vaccines that we will give as second doses.”

He added that the country is expecting about 700,000 doses in the coming week and another 3.9 million doses by mid August. 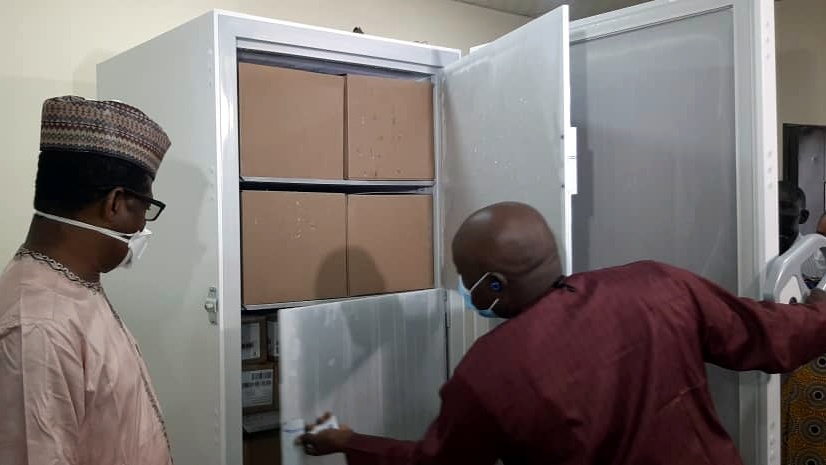 “We now have a large menu that Nigerians can choose from,” he said.

According to Mr Shuaib, the National Agency for Food and Drug Administration and Control (NAFDAC) has to certify that the vaccines are good and safe for Nigerians.

“NAFDAC has taken samples of the vaccine for testing and we expect that in the next 48 hours, they will give us feedback as to whether we are good to go,” he added.

Mr Shuaib further revealed that his agency will work with the private sector Coalition Against COVID-19 (CACOVID) to deliver the vaccines at the state levels, adding that the vaccines received are valid until December 2021 and January 2022 and that the two doses will be given four weeks apart.

The country representative for UNICEF, Peter Hawkins, in his opening remarks, implored Nigerians to get vaccinated and take responsibility to minimise the impact of the coronavirus on not only themselves but on their families and communities.

President Biden in June also announced plans to buy and donate additional 500 million Pfizer vaccine doses to 92 low- and lower-middle-income countries and the African Union which will be distributed through COVAX starting this month. 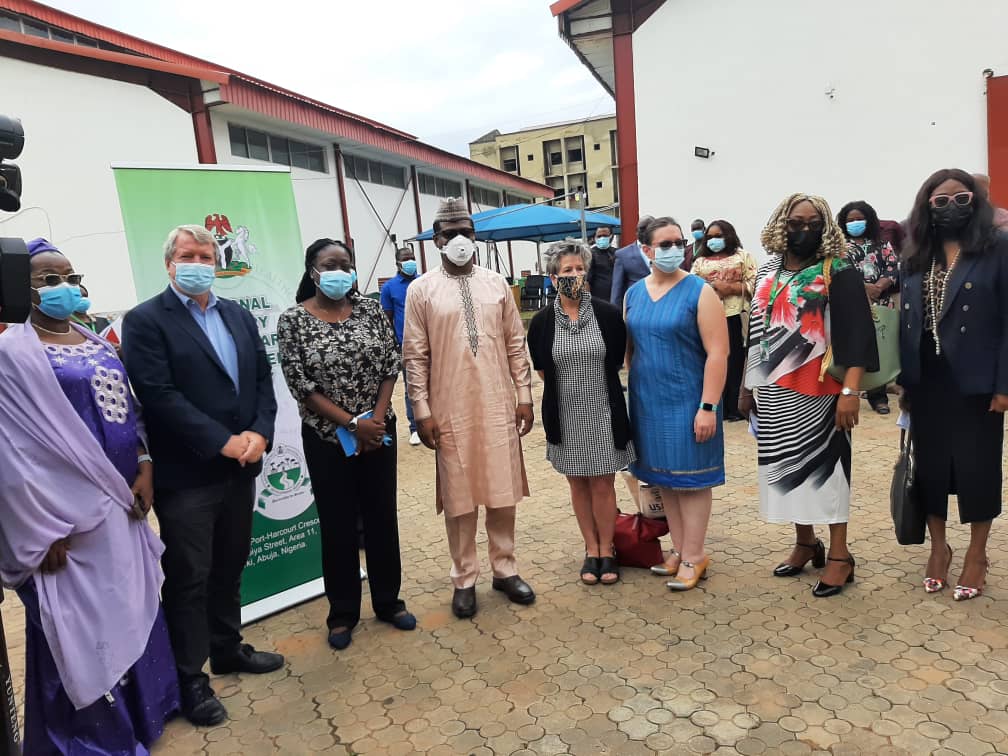 As the third wave continues to surge in Africa, experts worry that Africa might again be plunged into another health and economic crisis as seen in the previous year.

“Be under no illusions, Africa’s third wave is absolutely not over. Many countries are still at peak risk and Africa’s third wave surged up faster and higher than ever before. The Eid celebrations which we marked this week may also result in a rise in cases. We must all double down on prevention measures to build on these fragile gains,” Dr Matshidiso Moeti, WHO Regional Director for Africa, said at the regional media briefing recently.

According to WHO, nearly 70 per cent of African countries will not reach the 10 per cent vaccination target for all countries by the end of September at the current pace.

About 3.5 million to 4 million doses are administered weekly on the continent, in order to meet the September target, this figure must rise to at least 21 million doses weekly.

Moderna vaccine was the second one authorised for emergency use in the U.S.—it received FDA EUA on December 18, 2020, about a week after the Pfizer vaccine.

Moderna is an mRNA vaccine, using the same technology as the Pfizer-BioNTech one and with a similarly high efficacy at preventing symptomatic disease.

The Moderna vaccine can be shipped and kept in long-term storage in standard freezer temperatures, and stored for up to 30 days using normal refrigeration, making it easier to distribute and store. Also, the Moderna vaccine was slightly less effective in clinical trials—about 86%—in people who are 65 and older.

It is said to be 94.1 per cent effective at preventing symptomatic infection in people with no evidence of previous COVID-19 infection.

The vaccine is said to have high efficacy in clinical trials among people of diverse age, sex, race, and ethnicity categories and among persons with underlying medical conditions (although, the efficacy rate drops to 86.4% for people ages 65 and older).

According to Yale Medicine, some research suggests that Moderna’s vaccine may provide protection against the Alpha and Beta variants. But this is still being studied.

However, while more research is needed on Moderna’s efficacy against Delta, some experts believe it may work similarly to Pfizer since both are mRNA vaccines.

The common side effects noticed so far according to experts could iinclude chills, headache, pain, tiredness, and/or redness and swelling at the injection site, all of which reportedly generally resolve within a day or two.

On rare occasions, mRNA vaccines have appeared to trigger anaphylaxis, a severe reaction that is treatable with epinephrine. For that reason, experts recommend monitoring everyone for 15 minutes after their COVID-19 shot, and for 30 minutes if they have a history of severe allergies.

2023: Scrutinising the familiar, for the Unknown (2), By Dakuku Peterside