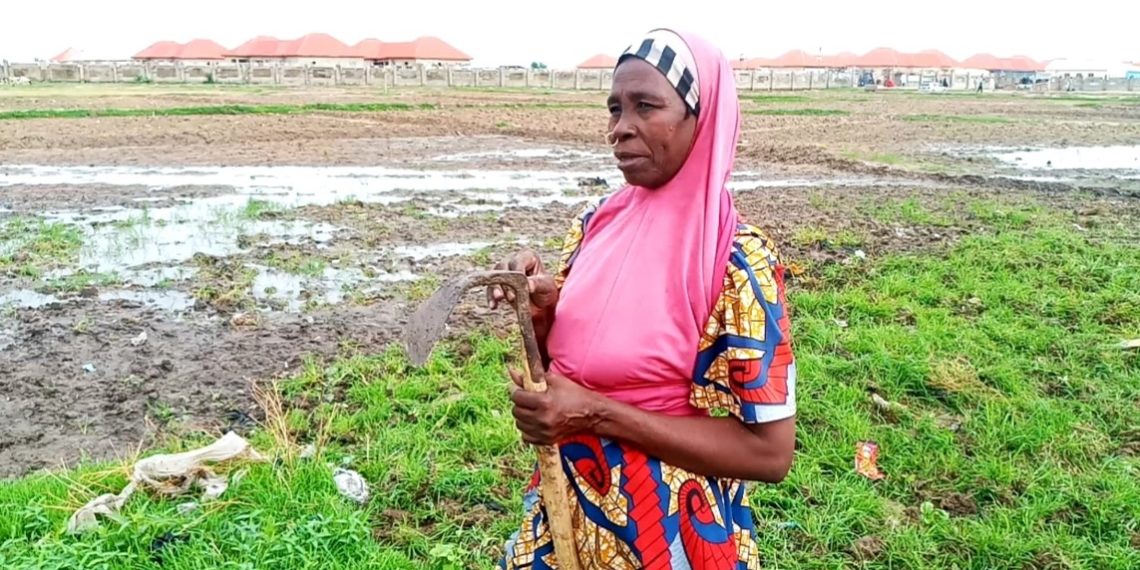 This is Fatima Adam, a displaced farmer from Marte Local Government Area working on her farmland close to Bakassi camp where she has been taking refuge for over four years

Farming, the commonest means of livelihood in these impacted areas, remains a difficult, nearly impossible enterprise due to the sustained Boko Haram conflict.

Buba Gambo, forcibly uprooted from his Konduga home, is now a refugee in Maiduguri, where living has become traumatic amid feeble efforts towards livelihood recovery.

He was a thriving farmer but he is now cut from his farm – which he depended on to cater for his family – due to the raging armed hostilities between Boko Haram insurgents and Nigerian security forces.

“I am a rice farmer, who used to get over 200 bags of rice annually but I couldn’t farm again, because our farmlands are no longer accessible,” Mr Gambo lamented.

Mr Gambo’s fate offers a window into the conditions of several other forcibly displaced farming families.

The 12-year long Boko Haram insurgency as well as the counter-insurgency operations in Borno State has resulted in killings of over 35 thousand people and displacement of more than two million people across the Lake Chad Basin countries, including Nigeria, Chad, Cameroon, and Niger.

Consequently, Maiduguri, the capital of Borno State in northeastern Nigeria, worst hit by Boko Haram offensive, now hosts internally displaced persons, among them farmers like Mr Gambo, from neighbouring communities within the state. 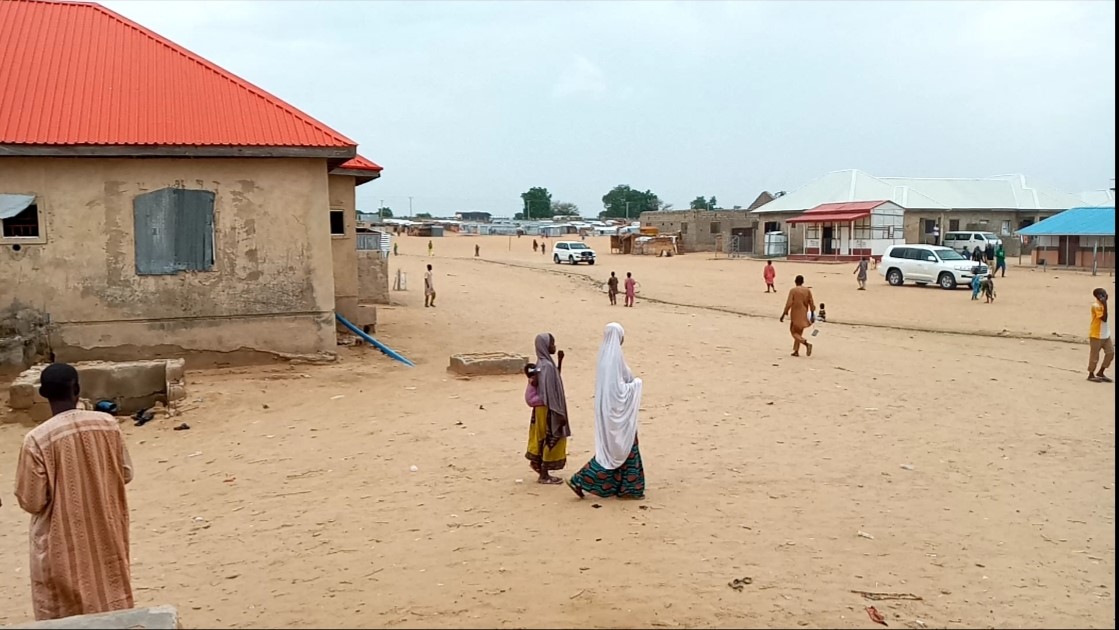 Farming, the commonest means of livelihood in these impacted areas, remains a difficult, nearly impossible enterprise due to the sustained Boko Haram conflict. Agricultural production has fallen as attacks and counter operations continue to pose threats to local farmers.

Picture 2: 61-year-old Buba Gambo worried over his dispersed farmland at Maita Meleri village, Konduga Local government area which usually yields fortunes for him prior to the start of insurgency.

“Prior to the insurgency, I used to harvest more than 300 bags of farm produce such as rice, maize and beans annually,” she said.

However, the counter-insurgency operations and other security measures also hindered agricultural activities. These measures include road closures, ban on the cultivation of tall crops, curfews, control of sales of fuel, fertilisers and other farm implements in the state.

Farming is the mainstay of the people of Borno State.

Apart from crop farmers, there are also fishers and livestock keepers. The substantial crops produced or cultivated in the state include millet, sorghum, beans, groundnut, wheat, rice as well as vegetables such as onions, pepper, tomatoes, garden eggs, carrots and other leafy vegetables.

The major livestock reared in the state include sheep, goats, camels and cattle, among others. The inhabitants of Borno are also well known for their fishing activities around Lake Chad.

More so, most of the Internally Displaced Persons (IDPs) taking refuge in various camps within and outside Maiduguri relied on agric business for their livelihood before their forced displacement.

The camp manager of Dalori IDPs camp 2, Mu’azu Garba, disclosed that over 90 per cent of the IDPs in the camp were farmers from Bama, Konduga and Gwoza Local Government Areas of the state.

Picture 3: This is Dalori IDPs camp 2 in Kofa, Konduga Local government area. The camp which houses over 16,000 households was officially opened in 2014. 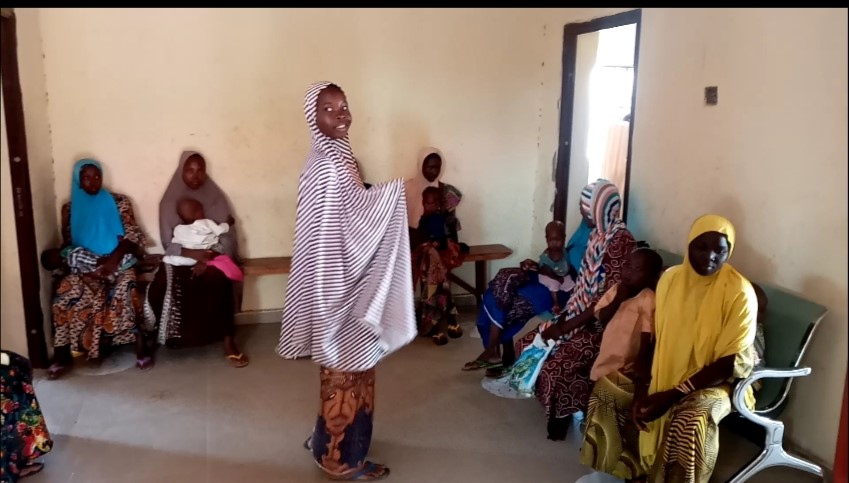 The current conditions of IDPs in and around Maiduguri are disturbing as they lack adequate basic social amenities and human capital enhancement services such as foods, shelter, health and education, among others.

Food remains the most unmet need among IDPs at Bakassi and Dalori camp 2, with a population of over 30,000 people combined despite a series of interventions in the state.

37-year-old Modu Gana (not real name), an IDP from Dalori camp 2, said that they are hungry and without any means to fend for themselves.

“We haven’t had NEMA here in Dalori camp 2 for almost four years. It is only SEMA that is here with us, but they are only receiving people’s complaints without providing food,” she said.

He said neither NEMA nor SEMA provided them with food at the camp.

Similarly, IDPs in Bakassi camp have complained that the quantity of food supplied to them by NEMA and SEMA cannot sustain them.

Some luckier displaced farmers engage in subsistence dry season farming within or nearby land close to the camp where they can cultivate some little leafy vegetables in order to supplement foodstuffs given to them by government agencies and other Non-governmental organizations (NGOs).

Zanna Ali, a displaced farmer from Monguno, also said that hunger is affecting them (the IDPs).

“We are unable to farm due to insecurity and the food supplied to us is not that sufficient for the size of each household,” he said. 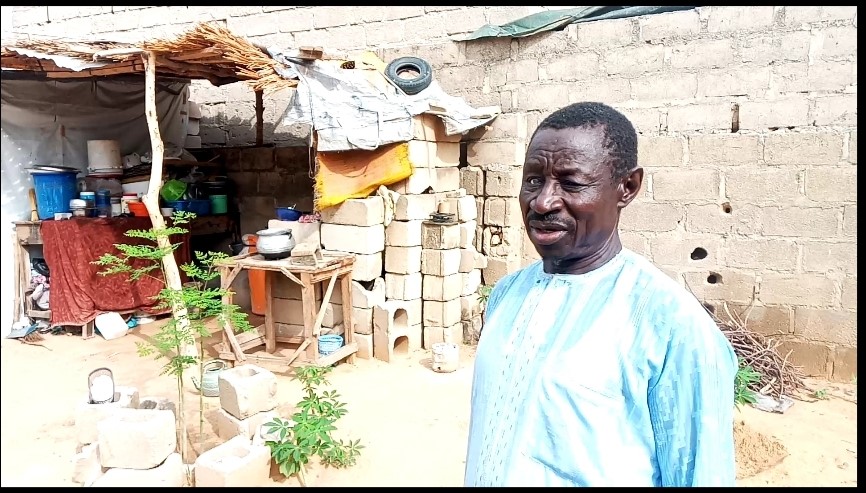 Meanwhile, the Borno State Government in its efforts to ensure food security, under the administration of Babagana Umara Zulum has reiterated its commitment to return displaced persons to their communities to resume farming activities in order to assist the state government in tackling the rising food insecurity.

Some local government councils in the state have launched operations back to farm to consolidate the efforts of the state government in tackling food insecurity by providing the local farmers with chemicals, fertilisers, seeds and other farm implements with a view to boosting farming activities as the rainy season set-in.

Also, the International Organisation for Migration (IOM) has also commenced screening of households within Dalori camp 2 for food distribution.

But experts say aid agencies have to combine material aids with interventions that help IDPs towards livelihood recovery to prevent a dependency culture and perverse incentive.

Meanwhile, access to healthcare services is very poor in both Bakassi and Dalori camp 2.

According to a 2017 report by the World Health Organisation, one-third of the 749 known health facilities in Borno State were completely or partially destroyed by the insurgency.

A clinician in Dalori camp 2, Mohammed Konduga, disclosed that at least 70 patients are being treated daily at the only clinic in the camp. Those with severe health complications are referred to another clinic, while some patients will be asked to purchase the required medicines prescribed for them.

Mr Mohammed noted that the United Nations Children’s Emergency Fund remains supportive to the clinic through provision of medical facilities and stipends to the volunteers working in the clinic.

Mohammed Jalo, head of nutrition unit, Dalori camp 2, also said over 800 cases of malnutrition are recorded annually within the camp and its environs.

He said, “the nutrition crisis mostly affects under-5 (0-59 months) children due to terminal illness, inadequate food intake, such as sudden change in quality and quantity of food as well as poor infant feeding practices, among others”.

The Community Management of Acute Malnutrition (CMAM) program has been put in place and implemented by the United Nations in order to help poor children suffering from malnutrition worldwide.

The health personnel working at the clinic are also attending to some patients from neighboring communities, hence, the need for government and other humanitarian organisations to provide adequate medical facilities to ensure effective healthcare service delivery in the camps.

Driven by extreme ideology and socio-economic exclusion and injustice, which provides easy recruits, Boko Haram is a creation of radical cleric Yusuf Mohammed.

The extrajudicial execution of Mohammed after a major faceoff with the state security forces further radicalised his followers.

The conflict and its devastating consequences have made Borno State and swathes of the North-east a focus of local and international humanitarian aid for several years.

However, the conditions of the displaced remain disturbing and farmers, cut from their livelihoods, are heavily affected.

Support for this report was provided by Premium Times Centre for Investigative Journalism with funding support from Free Press Unlimited.