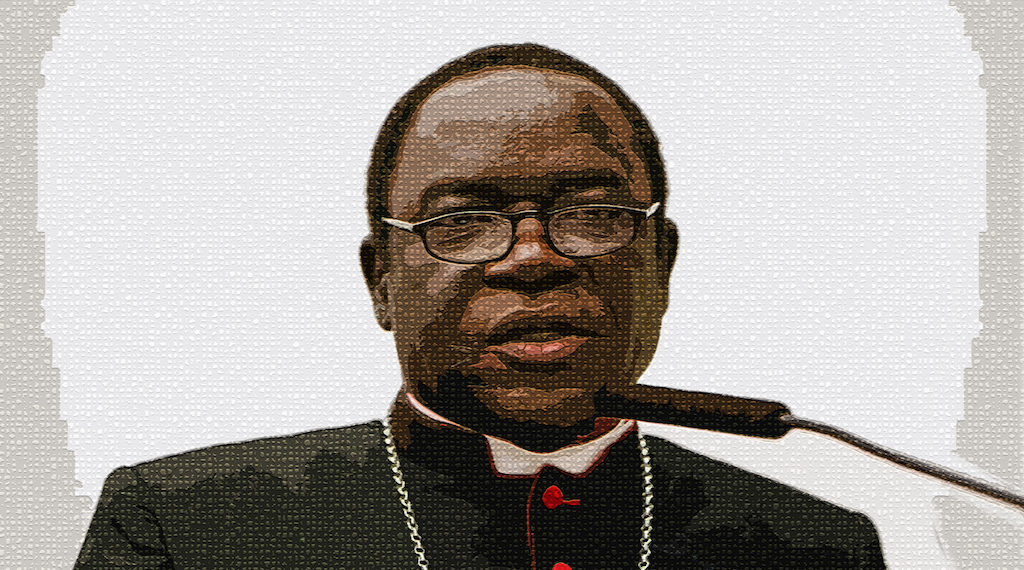 The presidency accused Mr Kukah of spreading falsehood with the intent to discredit the administration.

The presidency has attacked an influential Catholic cleric, Matthew Kukah, over his recent address to the U.S. Congress.

The presidency accused the cleric of spreading falsehood with the intent to discredit the administration.

Mr Kukah had in a virtual appearance before the American lawmakers criticised President Muhammadu Buhari’s handling of the security situation in Nigeria. He also alleged that President Buhari was nepotistic in key appointments and favoured Muslims over Christians.

“The whole of the North is being invaded by armed bandits that are launching attacks at will. The President has shown nepotism in his appointments as he is appointing only people that share the same religion with him into key political offices like the security Chiefs,” Daily Post newspaper reported the Catholic bishop as saying.

“For the first time in Nigeria, the first three persons: the President, the Senate President and the Speaker of the House of Representative are all Muslims.

“This has never happened before. So, we require practical and measuring assistance that can help us and our children.”

In its reaction, the presidency in a statement by presidential spokesperson Garba Shehu said Mr Kukah was doing his “best to sow discord and strife among Nigerians.”

In the statement released Sunday, Mr Shehu accused Mr Kukah of falsehood, saying attacks by armed men stand condemned but are not targeted at Christians.

President Buhari has been criticised by many Nigerians for his handling of the security situation as attacks and kidnappings by armed persons have become commonplace in many parts of Nigeria.

Read the full statement by Mr Shehu below.

It is unfortunate, and disappointing, for citizens of Nigeria to bear witness to one of their Churchmen castigating their country in front of representatives of a foreign parliament.

We are all too familiar with these overseas political tours that opposition politicians take – visiting foreign leaders and legislators in the United States, United Kingdom and Europe. So, the argument goes, if they are heard seriously abroad, then Nigerian citizens back home should surely listen to them too.

But in order to be heard at all, and to maximise media coverage back home for their activities, inevitably these visits involve painting the worst possible picture of our country before their chosen foreign audience.

Soon enough we inescapably hear an identical list of racist tropes against northerners, how one religion dominates governance above all others, how the government is doing nothing to address herder-farmer disturbances, and how the government spends money on infrastructure to benefit everyone but the group and religion of the speaker. Of course, in order not to disappoint their western audience, regardless of fact, the list is always the same-and always slanted for whoever wishes to cross-check.

Nigerians expect this from their unimaginative opposition – but it is troubling when a so-called man of the Church copies the worst excesses of those seeking personal advancement in public office.

Only this government has put forward the first and singular plan in nearly a century to address herder-farmer challenges – a fact recognised by international NGOs, including the International Crisis Group. To declare to a foreign audience that this government does nothing is an incredible falsehood.

To suggest that investment in infrastructure between Nigeria and Niger is wasteful and biased – when a similar infrastructure project between Lagos and Benin has revolutionised the two neighbouring economies to the advantage of both our countries – is quite disturbing.

There is no bias in this government when the president is northern and Muslim, the vice president southern and Christian, and the cabinet equally balanced between the two religions. But neither is there anything in our Constitution to state that political posts must be apportioned according to ethnicity or faith. It takes a warped frame of mind for a critic to believe ethnicity is of primary importance in public appointments. It is yet more troubling to hear a Churchman isolating one group for criticism purely on ethnic lines.

With due respect to the esteemed position he holds, the Bishop’s assertion that only Christian schools are being targeted by bandits or terrorists is not supported by the facts on the ground. It is sad to say but also true that victims of crime, kidnapping, banditry and terrorism cut across all strata of the society. Sad but true that Kankara students in Katsina State were stolen by bandits of the same Islamic faith as those they took away. The same may be true of those who are still holding the 134 students of the Islamic School at Tegina in Niger State. The nation witnessed the sad incident of the female students abducted by bandits at Jangebe in Zamfara State and the over 100 predominantly Muslim students of the Federal Government Girls College Birnin Yauri in Kebbi State who are currently in captivity- and the nation’s security agencies are hard at work to release them unharmed.

The attack on Christian students is sad and unacceptable; so also is the abduction of students of other faiths. The claim that only Christian schools are being targeted is totally untrue.

As a nation and a people, we must together define evil as evil. We must not allow our religious differences to divide us. No one gains but the evil doers when we divide our ranks according to ethnicity and religion in confronting them. The bandit, kidnapper and terrorist are the enemies of the people who should be confronted in unison.

To be clear, The Bible is definitive on matters of ethnicity and racialism: In Romans 2:9-10, it says: “There will be trouble and distress for every human being who does evil: first for the Jew, then for the Gentile; but glory, honour and peace for everyone who does good”; And in Galatians 3:28: “There is neither Jew nor Gentile, neither slave nor free, nor is there male and female, for you are all one in Christ Jesus.” Whether Christian or Muslim, we stand by these beliefs and are steadfastly committed to them in governance.

There is no place in mainstream civil discourse for those who actively, negatively, and publicly label an individual ethnic group, especially before a foreign audience. These are not the views expressed or opinions held by the vast majority of the citizens of Nigeria. For all our challenges as a nation, nearly all of us seek to live together in harmony, celebrating differences, and finding common ground as Nigerians above all. But people like Kukah are doing their best to sow discord and strife among Nigerians.

More than any other set of people, leaders – in politics or religion who preach respect for truth have a duty to practice it. It is a moral and practical responsibility.

Going by the history of the Church as is well known, it will stand up publicly for the truth.

It is time others did the same.