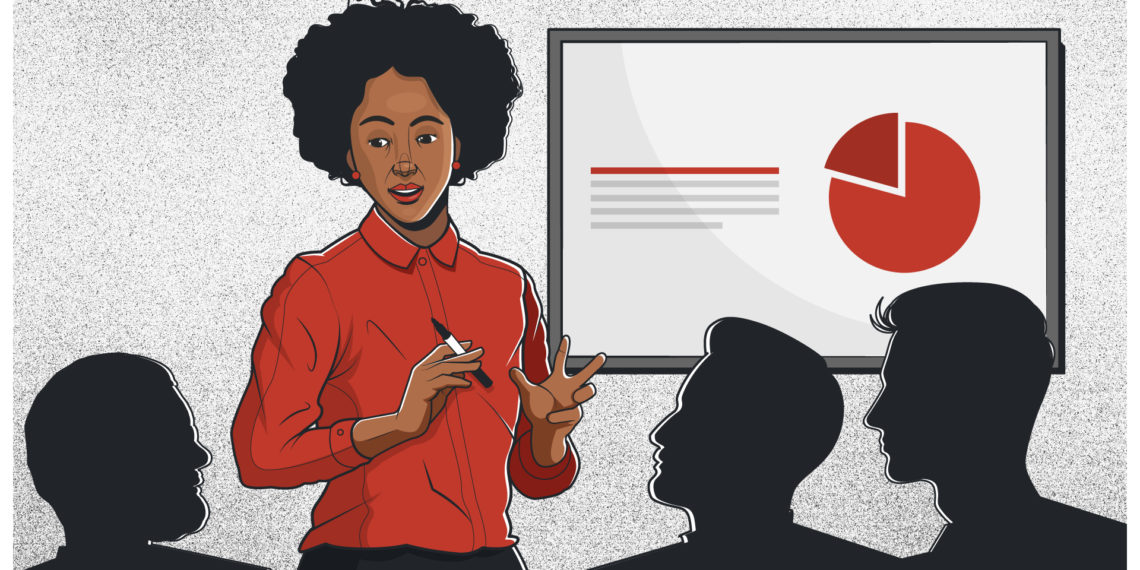 The current bureau chief for the Guardian Newspaper in Abuja, the Federal Capital Territory (FCT), Bridget Onochie, is the first female to attain such a position in the medium.

Mrs Onochie said she started her media career with the organisation as a book reviewer more than 15 years ago while taking part in the mandatory national youth service scheme by the National Youth Service Corps (NYSC).

Having passionately worked with the platform as a corps member, she was employed in 2005 by the newspaper after passing out from the scheme.

But like her other colleagues in the newsroom, she experienced the unthinkable. There was no promotion for 12 years.

“I was not promoted between 2005 and 2017; there was no promotion but when this one came, I jumped all other steps and was made the head of bureau,” Mrs Onochie said. 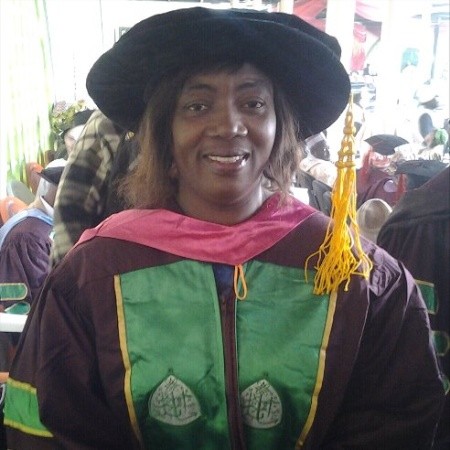 However, rather than remaining stagnant on the job while waiting to be promoted, Mrs Onochie said she engaged in self-development by pursuing a Master’s degree in Creative Art and later a Doctoral degree which she bagged in 2015. In 2017, she was moved from the art desk to cover parliament proceedings.

“Although promotion was not forthcoming, I didn’t despair and it was not because I was a woman but it was the general atmosphere with the leadership of the medium at that time.

“When the medium thought it necessary to engage an in-house person as the head of bureau in March 2021, many things would have spoken for me but I think that they may have looked at other people in the newsroom and I feel self-development offered me an added advantage,” she said.

Ms Onoche’s story paints a picture of the reality in many Nigerian newsrooms.

A study conducted by this reporter among leading media organisations in Nigeria in the course of this report reveals that out of a total of 50 managerial positions, only 32 per cent are occupied by women, while 68 per cent by men.

For instance, of the eight members of the management board at Premium Times Newspaper, only two are women.

The management team on Channels TV is composed of 14 members, only four are women. At the International Centre for Investigative Reporting (ICIR), nine members make up the management team, with women occupying only three positions. For Daily Trust, only two women occupy managerial positions among the available 10 slots. 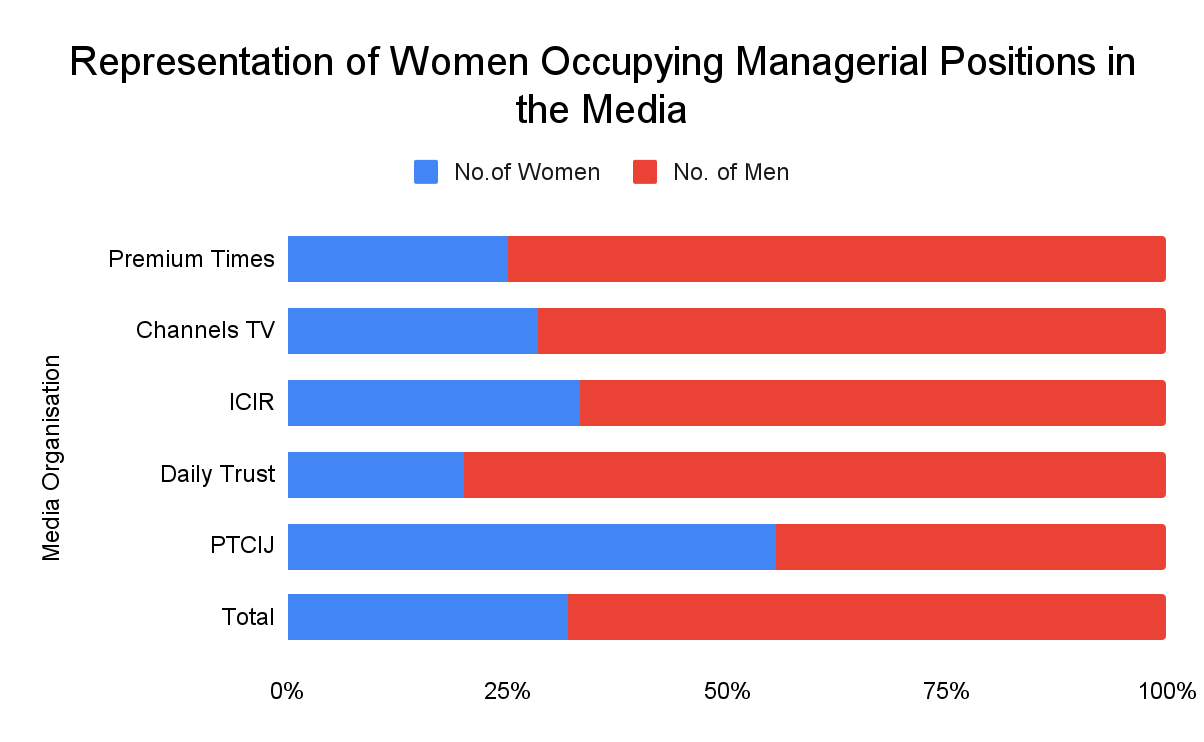 These findings come 25 years after the Fourth World Conference on Women, held in Beijing, China, with the theme; “Action for Equality Development and Peace.”

At the conference, 189 countries, including Nigeria, adopted a resolution that was tagged Beijing Declaration and Platform for Action (BPFA).

The BPFA mapped out 12 critical areas in which women are said to be disempowered and drafted strategic objectives and actions for member states to achieve gender equality in all spheres, including the media.

This visionary agenda is still regarded as the most comprehensive global policy framework and a blueprint for action to realise gender equality and uphold the rights of women and girls globally.

But according to the 2020 GMMP report, though the last five years have seen substantial incremental changes towards parity in subjects and sources, there is still a long distance to cover.

This is evident in the global coverage of the coronavirus pandemic. In Nigeria in particular, among health specialists who appeared on televisions on COVID-19 related news, only one of the five was a woman.

The story is the same in South Africa and India, a 2020 report titled; the missing perspectives of women in COVID-19 news and commissioned by the Bill and Melinda Gates Foundation, observes.

Various other studies have also shown that women pursuing a career in the communication sector are yet to attain positions at the decision-making level or serve on governing boards that influence media policies. Glass ceilings appear to be setting in on specific important news media gender equality indicators, while others are edging upwards.

In Luba Kassova’s ‘The Missing Perspective’ (2020), globally, women remain the minority in newsrooms and in news management structures where only 33 per cent of newsroom managers are women.

The report also noted that women journalists are much more likely to work on lower-profile news beats than higher profile, agenda-setting ones.

Experts have identified some natural tendencies which they claim tend to serve as barriers to women’s development and progress in society. These tendencies include culture, intra-gender rivalry and inadequacies by a section of males who they believe feel threatened by women in power.

“The society is structured in a way that prioritises the makeup of a woman and assumes that women will not be able to govern a country or a society but remember also that the battle is open. If you think you are strong as a woman, then you go ahead,” Mrs Onochie advises.

She noted that though her position gives her room to influence decisions and policies, many management meetings relate to the organisation and not necessarily about women.

“The only decision has to do with the organisation and if you bring good ideas, no one shuts you down based on your gender. I have never been shut down,” she said.

According to Mrs Onochie, the media operates like a paramilitary setup and does not factor the gender perspective. She said due to the media’s peculiar nature, anyone who chooses to be redundant by virtue of their gender would become irrelevant.

“Women who are relevant in the media are those who have carved out their time and energy to work in the sector,” she said.

Meanwhile, Oluwatosin Alagbe, the programme director of PTCIJ noted that gender-equality management has helped the organisation to offer both men and women, equal training and career-building opportunities.

She added that it has also helped with designing and implementing policies that make the team thrive.

“With a gender-equal management team, we hope we are able to ensure that the content we push out is balanced across gender lines. We also hope that others are encouraged to make women occupy all roles, including management roles, in newsrooms,” she said.

Amid the variations in managerial positions, many believe competency and relevance are key factors to consider when discussing issues around gender equality.

In 2017, the Wole Soyinka Centre for Investigative Journalism (WSCIJ) initiated the Female Reporters Leadership Programme (FRLP) to create a balance between opportunities and representation of women to men in Nigerian society by supporting female reporters with the tools, finesse and skills they need to qualify for leadership positions in their respective media houses.

Motunrayo Alaka, the WSCIJ’s executive director said the Reports Women FRLP was created to address ethical, equity and sustainability issues in the media. 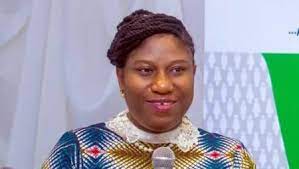 “When we did a survey about the status of female persons in Nigeria’s newsrooms, there were newsrooms that did not even have any female persons in editorial board or management and in some there were seven men to two women. If the media prescribes to the society what and how it should be, then the media itself should live up to this expectation by showing that equity,” she said.

Mrs Alaka observed that if the media sidelines women who make up nearly half of Nigeria’s population in news reporting, they lose out on funding opportunities that support inclusiveness on all sides.

She added; “The media talks about sustainability and the fact that revenues are dwindling but when you tell half the story, you get half the funds.

“That is why WSCIJ is working hard on a source guide that is focused on women sources. If there are women there, it would make sense for the media to tell the stories of women because there are women who will buy their products, who would be interested in the news they are telling.”

According to the 2020 FRLP Impact Assessment report, of the 41 fellows who completed the survey, 24, representing 59 per cent, have been promoted or given higher responsibilities in their organisations after the fellowship.

Similarly, the African Women in Media (AWiM) is currently developing an expert roster, which it says will serve as a central database for female experts across several industries in the world.

AWiM is an international non-governmental organisation that aims to positively impact the way media functions in relation to African women.

According to Yemisi Akinbobola, the founder of AWiM, the roster aims to ensure that female perspective on key global issues is captured and that women are fully represented in media content. 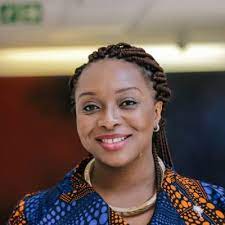 “If we are saying that women are over 50 per cent represented in the world, then we need to represent that in media content,” she said.

Speaking on the issue of relevance and competence, Ms Akinbobola said the media is filled with many biases that need to be addressed, such as roles assigned to male and female reporters.

She added; “Women who make up the majority of journalism students in tertiary institutions become the minority group in the industry and this is because women are disenfranchised by the very nature of their gender, even at the point of entry.

“For example, Mary and John entered at the same time and John is asked to go and cover politics and Mary, fashion. When training opportunities arise, men are prioritised because they are reporting politics and economics. Who needs the training to report on fashion?”

These gendered allocations of opportunities, according to her, favours one gender over the other.

“His career is moving faster because he is allowed to produce content that would get him the award and meet people that elevate his profile as well as pieces of training that give him that competence needed,” Ms Akinbobola said.

In the 2020 report published by AWiM, which is titled; “Barriers to Female Journalists in Sub-Saharan Africa,” a significant 36 per cent of the respondents attributed their barriers of progression to the lack of a gender policy focusing on progression at their organisation.

The study also found that where gender policies exist, they have not necessarily led to transformative change within the respective context.

Ms Akinbobola, a one-time recipient of the prestigious CNN Africa Journalist Award, recommends that media organisations develop a transparent approach to leadership where there are clear progressional structures.

She also encourages women to establish strong networks among themselves where they can collectively push for policies that concern them within their organisations.

She said; “A typical example is Standard Media in Kenya where women have established a network known as HerStandards through which a gender policy has been developed and a creche for new mothers and their babies have been established to make work easier for them.

“Technology also gives women opportunities to build their brand and take up an entrepreneurial approach to their careers”.

Despite these barriers confronting women in the media, Mrs Alaka believes that there has been significant improvement since the Beijing conference in 1995.

She said; “We don’t have much to say about that when we talk about the political landscape of our country, we are going south. But generally speaking, in terms of other spheres, even in the media, there have been a lot of changes. For me, intentionality is what makes the difference.

“We have a long way to go but we must acknowledge that we have made some progress when you are dealing with something this big that has its foundation in culture and in religion, you should celebrate the little successes because you are dealing with behavioural and power issues.”

This story was supported by Code for Africa’s Wanadata initiative