ANALYSIS: Unchanged since 1996, INEC’s expansion of Nigeria’s polling units could be game changer

Polling units have been said to be central to the electoral process as they are the location where electorates exercise their voting rights.

In February, when Nigeria’s electoral commission chairman, Mahmood Yakubu, said the number of the country’s polling units had remained the same since 1996, it came as a surprise to many.

Polling units have been said to be central to the electoral process as they are the location where electorates exercise their voting rights. They, in large part, determine the outcome of an election.

The Electoral Act 2010 (as amended) defines a polling unit (PU) as “the place, enclosure, booth, shade or house at which voting takes place under this Act.”

While the size of Nigeria’s population is hotly debated as its population figure is a projection from a 2006 census that some experts say was flawed, in 1996, the country had about 110 million people as against the current over 200 million.

By the 2019 general elections, the registered voters in Africa’s most populous country had reached 84 million people, but the polling units remained unchanged.

This was a 25 per cent rise from the penultimate election in 2015, according to INEC.

By this projection, the number of registered voters is bound to rise by 2023 and may compound the woes of congested polling units if new viable and accessible ones are not added.

“It is important to dissociate the process with the suspicions Nigerians have that population figures are always invented,” a political scientist and development expert, Jibrin Ibrahim, wrote in an op-ed in February.

“Abuja was created forty years ago and the evidence of massive population inflows into the area, of millions of Nigerians from all States, should be obvious.”

“The Lagos-Ogun zone has also had huge population inflows due to its economic dynamism, and the creation of more polling units in the area is not a political allocation but a vital need to allow all citizens the opportunity to exercise their franchise,” Mr Ibrahim added.

This explains why the INEC said it had received 9,777 requests from across the country for the establishment of additional polling units.

The requests were about 5,700 last October, but they spiralled by over 4,000 in just four months.

“In 2019, the country had 84 million registered voters and the number of polling units still remained the same,” he added.

In the bid to decongest existing ones and relocate polling units in “inappropriate places,” INEC delivered its years-long goal to increase the number of polling units in the country in June.

INEC said Nigeria now has 176,846 full-fledged polling units after 56,872 new ones were added to the existing ones.

“It is exceedingly important that polling units are not only ready and conducive to receive voters, but that they are also well-organised and secure for the set of activities that occur in them on election day,” Mr Ibrahim wrote. “Indeed, well-organised and efficiently run polling units are emblematic of the quality of the entire election ecosystem.”

Election monitors during the 2019 elections and off-cycle elections that have followed since then have been consistent with their observation that there are still some polling units that are inaccessible.

Therefore, more than the expansion of the number of polling units, the accessibility of existing polling units to align with current realities is key.

Already INEC began a modernization drive which involves taking an inventory and spatial location of the about 120,000 polling locations. Thereafter, details of the locations would be linked to the Electronic Voting System (EVS), a database of the names of all eligible voters.

The Electronic Voter Register (EVR) is a graduation from the redundant, error-prone paper-based records and polling cards of the late 1990s to the information technology-based voting system which keeps an e-database. 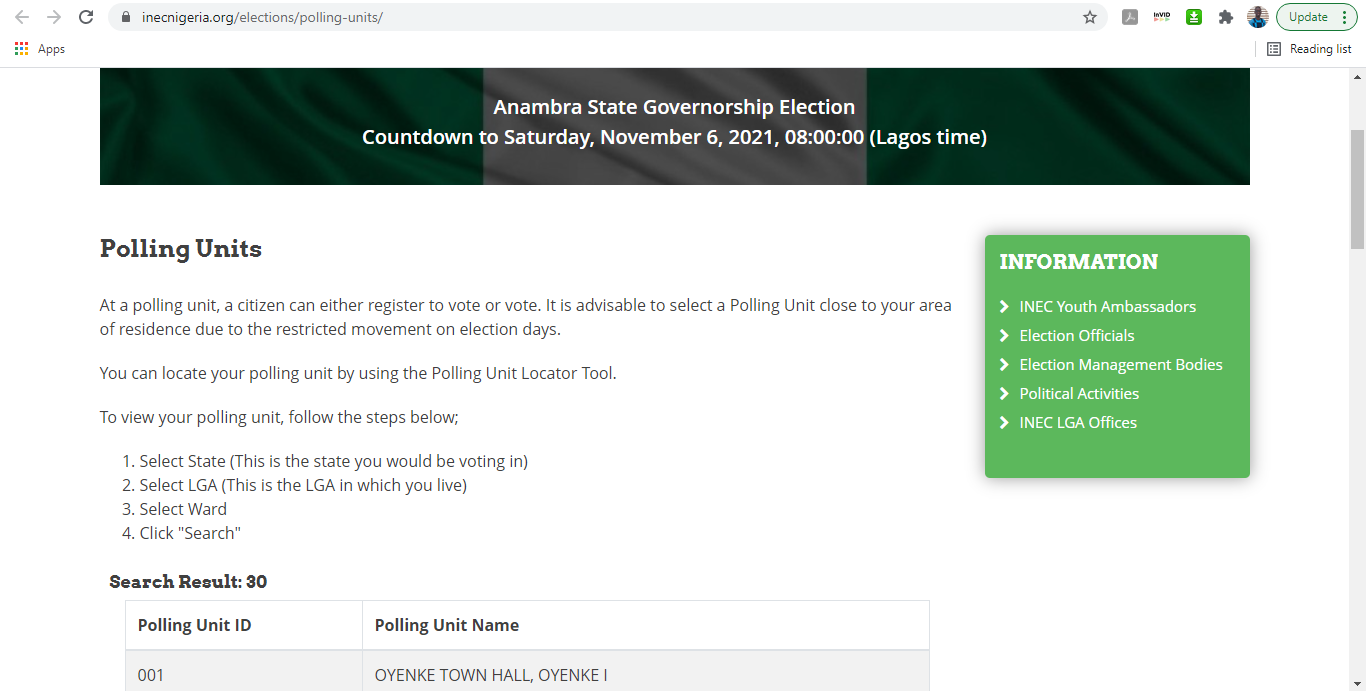 Likewise, INEC’s website has a landing page that runs a database to locate polling units by wards, local government areas and states. This is a step towards transparency and accessibility.

These moves by INEC, alongside the continuous voters registration which allows for online registration, have been tipped to incentivise electorates and make turnout for elections more attractive.

Clearly, one thing INEC would be looking to reduce is the civic rebellion staged by Nigerians during elections as more Nigerians are more likely to boycott voting than those who won’t.

This is why its efforts to ease voting could prove to be a game-changer in the bid to stem the rising rate of election apathy in the country.

(Editor’s Note: This is part of a series of reports to improve Nigeria’s electoral system. The report is a partnership between Premium Times and the Centre for Democracy and Development (CDD).