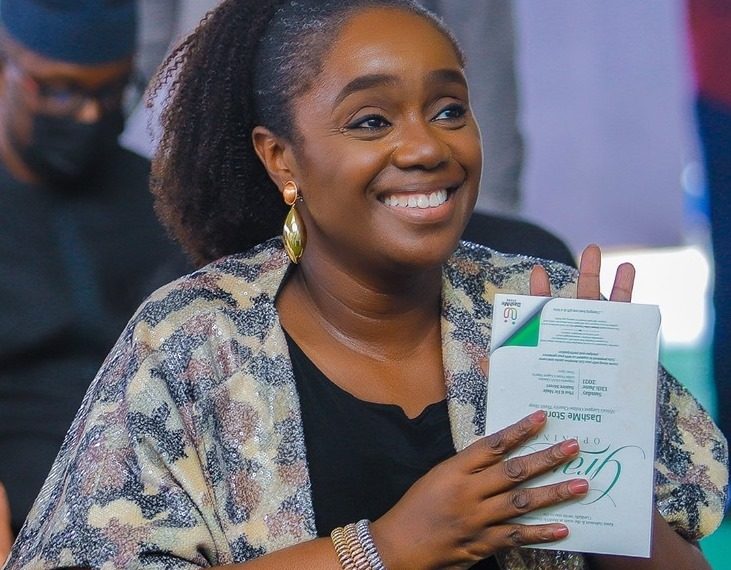 The court did not review the fact that Kemi Adeosun used a forged NYSC certificate to get to office.

Nigeria’s former finance minister Kemi Adeosun, who was caught in a certificate forgery scandal, got what appears to be a reprieve from a court on Wednesday.

The Federal High Court in Abuja ruled that Mrs Adeosun did not breach any law by being appointed to the ministerial position in 2015 without participating in the NYSC scheme.

Although Mrs Adesosun forged her NYSC certificate to be appointed minister, the issue of forgery was not brought before the court as the federal government has refused to prosecute her for that.

Taiwo Taiwo, the judge, held that Mrs Adeosun, as of the time she graduated from a United Kingdom university at 22 in 1989, was a British citizen who was not qualified to participate in the scheme.

The judge added that when she returned to Nigeria and became a Nigerian citizen at over 30 years old, she was no longer eligible to participate in the NYSC scheme.

Mr Taiwo ruled that NYSC certificate was not a requirement for Mrs Adeosun to be appointed as a Nigerian minister or contest state or national assembly elections.

The judge did not review the forgery of an NYSC exemption certificate which Mrs Adeosun procured for her screening ahead of her ministerial appointment in 2015.

“It is my finding, which was not challenged (by the Attorney General of the Federation) that by the time she (Adeosun) moved back to Nigeria in 2003, she was not eligible under the NYSC Act to serve in the National Youth Service Corps scheme.

“In fact, it would have been a criminal offence if she had participated in the NYSC under any guise.

“She had also been self-employed and was not in the employment of any agency or government, and therefore, she did not have to present a certificate of discharge as a prerequisite for employment.

“In any case, I have already determined from the facts before me that she was over the age limit for participation in the National Youth Service Corps at the time she moved to Nigeria.

“The plaintiff is a citizen of Nigeria by virtue of Section 25 (1) (C) of the 1999 Constitution. From my reading of this section of the Constitution, it is my finding that the plaintiff not being a Nigerian citizen in 1989 when she graduated from the University of East London, the United Kingdom, she was not eligible to participate in the National Youth Service Corps scheme,” the judge said.

On whether or not NYSC is required for ministerial appointment or legislative election, the judge said, “For the avoidance of doubt, participation in the NYSC scheme is not a yardstick to be elected into any of the legislative houses be it in the states or at the National Assembly, ditto (likewise) for ministerial appointment, despite the National Youth Service Corps Act being an integral part of the constitution by virtue of section 315 (5) of the Constitution.

“I have looked at the evidence before the court. I therefore grant all the reliefs in favour of the plaintiff. This is the judgement of the court.”

Mrs Adeosun had filed the suit marked, FHC/ABJ/CS/303/2021, with the Attorney General of the Federation (AGF) as the sole defendant.

She argued through her lawyer, Wole Olanipekun, a Senior Advocate of Nigeria (SAN), the former finance minister, argued that she was not a Nigerian citizen at the time of her graduation from the university.

The judge in granting the four prayers on Wednesday, noted that the AGF who is the sole defendant, conceded to the suit.

Mrs Adeosun graduated from the Polytechnic of East London in 1989, at the age of 22. According to her curriculum vitae, she was born in March 1967.

The institution changed its name to the University of East London in 1992. Mrs Adeosun has her certificate issued in the new name.

PREMIUM TIMES had in an exclusive report exposed Mrs Adeosun’s failure to participate in what is generally accepted as the mandatory one-year national youth service scheme.

The report revealed how Mrs Adeosun forged an exemption certificate many years after graduation which she presented as a substitute for a passing-out certificate.

Her official credentials obtained by PREMIUM TIMES had shown that the minister paraded a purported NYSC exemption certificate, which she said was issued in September 2009, granting her exemption from the mandatory service on account of age.

Mrs Adeosun, who had earlier served as the Commissioner for Finance in her home Ogun State, was appointed as the Minister of Finance based on the fraudulent NYSC exemption certificate in November 2015.

She was however forced to resign by the President Muhammadu Buhari administration in September 2019 based on PREMIUM TIMES report exposing her non-participation in the national youth scheme and her forgery of an exemption certificate.

The year-long service, organised by the National Youths Service Corps (NYSC), is compulsory for all Nigerians who graduate from universities or equivalent institutions at less than 30 years of age.

Eligible Nigerians who skipped the service are liable to be sentenced to 12 months imprisonment and/or N2,000 fine, according to Section 13 of the NYSC law.

Section 13 (3) of the law also prescribes three-year jail term or option of N5,000 fine for anyone who contravenes provision of the law as Mrs Adeosun has done.

Subsection 4 of the same section also criminalises giving false information or illegally obtaining the agency’s certificate. It provides for up to three-year jail term for such offenders.

The attorney-general, who was the defendant in Mrs Adeosun’s civil suit, and has the legal powers to prosecute her for forgery, has refused to do so.

In the build-up to the 2019 general elections, the ruling All Progressives Congress (APC) disqualified the Minister of Communications, Adebayo Shittu, from participating in the Oyo State governorship primary, following an exclusive PREMIUM TIMES report that showed that he skipped the NYSC.

A suit he subsequently filed to challenge his disqualification was struck out by the Federal High Court in Ibadan, Oyo State, on technical grounds in April 2019.

Mr Shittu skipped the NYSC but unlike Mrs Adeosun did not forge a certificate to get his ministerial appointment.