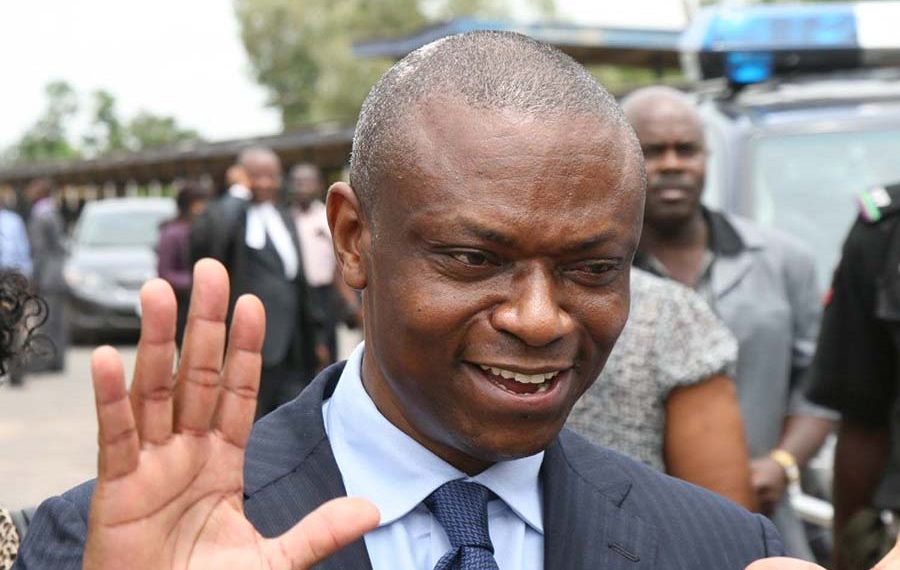 Mr Atuche is only the latest in what is becoming a growing list of convicted billionaire bankers.

On 17 June, a former managing director of the defunct Bank PHB, Francis Atuche, was convicted of fraud by a high court in Ikeja, Lagos.

The ruling came after a lengthy legal battle that lasted about a decade.

Mr Atuche and a former chief financial officer of the bank, Ugo Anyanwu, were accused of stealing N25.7 billion. The Economic and Financial Crimes Commission (EFCC) had preferred 27 counts against both of them.

Mr Atuche and his co-defendant begged the judge, Lateefa Okunnu, not to send them to prison.

“I plead for mercy, leniency, your kindness, and I plead that out of your kindness and generosity, you will not allow me to go to jail,” the former MD said.

“I am sorry and remorseful.”

“It was a well-planned, well-executed scheme but the bubble burst when the Central Bank of Nigeria (CBN) intervened,” the judge held.

“The first defendant (Atuche) was diversionary and evasive on the witness stand; sometimes confrontational and rude

“The third defendant (Anyanwu) was also combative and rude under cross-examination.”

However, this is not the first time a similar scenario would play out in the Nigerian banking industry. Mr Atuche is only the lastest in what is becoming a growing list of convicted rogue bankers.

Cecilia Ibru: On October 8, 2010, a former chief executive officer of the defunct Oceanic Bank, Cecilla Ibru, was convicted and sentenced to six months imprisonment after a plea bargain that saw her pleading to charges of fraud. She was ordered to pay back more than €1 billion, following 25 counts of fraud.

Mrs Ibru, who began working at the bank in the early 90s as a general manger, rose to become the managing director of the lender seven years after. During her time, Oceanic Bank evolved from its family-owned bank beginning to become one of Nigeria’s biggest publicly listed companies.

She was accused of granting credit facilities of N16 billion to a company that “had no collateral.”

Although she denied any wrongdoing, over 100 properties in different parts of the world from Nigeria to Dubai and the United States were confiscated from her. So also were her shares in 77 companies. However, under her stewardship, the bank reportedly experienced tremendous growth.

Okey Nwosu: The CEO of the defunct FinBank (now part of First City Monument Bank Plc) was among the five bank managing directors that were fired by the Central Bank of Nigeria on August 13, 2009 on allegations of fraud, money laundering and other.

He was accused alongside three directors of the bank: Dayo Famoroti, Agnes Ebubedike and Danjuma Ocholi in a 26-count charge centring on conversion and theft of N10.935 billion. They denied any wrongdoing.

In January 2021, Justice Lateefa Okunnu of the high court sitting in Ikeja Lagos found all the accused persons guilty and sentenced Messrs Nwosu and Famoroti each to three years in jail.

OTHERS STILL ON TRIAL

Meanwhile, there are other top bankers also facing trial for alleged fraud. They are still on trial and it is unclear how their cases will end.

Erastus Akingbola: In August 2010, the former managing director of the defunct Intercontinental Bank, Erastus Akingbola, was arraigned for fraud in a 22-count charge by the EFCC. He pleaded not guilty to all counts.

Mr Akingbola was accused of N47.1 billion fraud in what the commission described as “fictitious transactions.”

It was alleged he manipulated Intercontinental Bank’s share price and extended loans without the approval of board members.

The judge who had handled the case, Charles Archibong, had dismissed the charges for “lack of diligent prosecution” by the anti-graft agency.

Nnamdi Okonkwo: On April 28, 2016, the former managing director of Nigeria’s Fidelity Bank PLC, Nnamdi Okonkwo was held in custody by the EFCC for allegedly helping the former Minister of Petroleum Resources, Diezani Alison-Madueke, to launder fund of about N58.2 billion.

The EFCC slammed a 14-count charge including conspiracy and money laundering against Mr Okonkwo in a federal high court.

Charles Ojo: In October 2009, the erstwhile managing director of the extinct Spring Bank (now part of Heritage Bank) was originally arraigned alongside Atuche at the Federal High Court, Lagos Division, in a N125 billion fraud case.

The suit presided over by Justice Akinjide Ajakaiye alleged the two bank CEOs were involved in various forms of malfeasance ranging from disregarding due process in granting loans to some companies to manipulating share prices.

Both men have stake in Platinum Capital Limited, which they were said to have recklessly granted facilities worth billions of naira.

But the litigation has been bedevilled by a lot of impediments and setbacks, beginning with the transfer of the judge few months into the trial, which later culminated in his retirement.

Justice Fatimat Nyanko, who took over the case, would soon be transferred also, prompting the EFCC to start prosecution from scratch in a 45-count charge.

Mr Ojo prayed Justice Ofili Ajumogobia, the new judge, to dismiss the charges in May 2013.

“Where a charge does not disclose a prima facie case against the accused, it must be quashed,” said his lawyer, Osahon Idemudia.

“I submit that the second accused cannot be made to stand trial in a charge to which he ordinarily has no answer.”

Mrs Ajumogobia was posted to another court thereafter, while the case was assigned for the fourth time to Justice Saliu Saidu in January 2013, meaning the EFCC would have to present its case all over.

It would move to the current judge, Ayokunle Faji, in February 2017, the eighth year of the legal tussle, after Mr Saidu was relocated elsewhere.

Although a certified true copy of minutes of the 38th board of directors’ general meeting in 2008 was presented at the request of the court at a session last October, Tayo Oyetibo, the defence counsel, prayed the court to request the original copy of the document from the lender.

The prosecution objected the move, noting it could deal further blow to the suit that had already suffered three adjournments under the current judge. Justice Faji, nevertheless, heeded the plea of the defence and postponed the hearing.