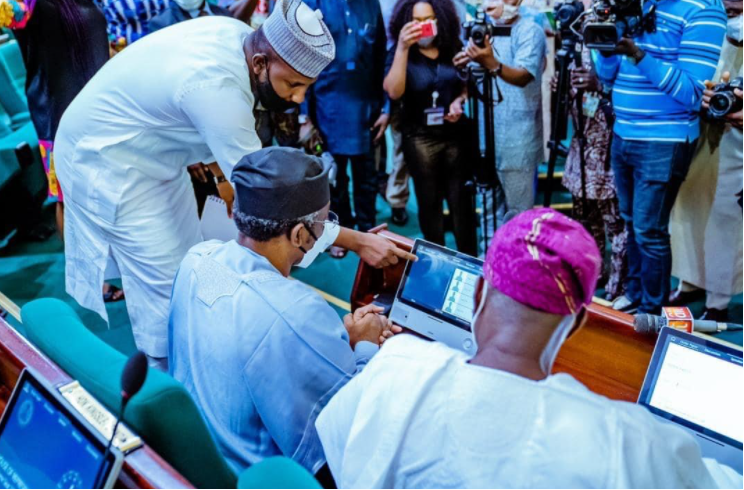 Months after installation of gadgets, Gbajabiamila’s promise, Reps yet to start e-voting

E-voting will expose to Nigerians how very few lawmakers, against the constitutional provision, are making decisions on bills and motions in the House of Representatives.

According to the document, “electronic voting will be installed in the chamber of the House of Representatives and in the committees, to maintain records of votes, ensure transparency and accountability thereby restoring the credibility of the votes taken in the House.”

However, the legislative agenda was amended following the outbreak of COVID-19, with the aspects of Information and Communication Technologies and legislative reforms watered down in the new amendment.

Julius Ihonvbere (APC, Edo), the chairman of the ad hoc committee that amended the legislative agenda, did not return messages sent to his phone on why the House reduced the number of promises on E-parliament.

At the commissioning of the project, Mr Gbajabimaila had said: “This is one of the things we promised to do in the 9th Assembly. I am glad we have been able to deliver that within a year,” adding that “we promised e-voting, seamlessly, the chamber is now more or less paperless.”

About one year after Mr Gbajabiamila’s speech, what he said has been ‘delivered’ is yet to be put to use.

Even prior to the installation of the gadgets, Mr Gbajabiamila in July 2020 promised the commencement of e-voting.

“In front of you on your seats, you have little panels that we installed. This is in keeping with some of the reforms we have talked about that Nigerians will see. By tomorrow, I expect it to be fully operational. The whole system is based on the fact that we will soon now be having e-voting in this chamber.

“Now, this will not be applicable to all motions and bills, because we have several of them. For those that we consider important, and of significance, we will be adopting the e-voting system. We don’t need your voting card, you only need to press a button and it tells you who voted, which side they voted for,” he said.

Although the Speaker stated this last July, electronic voting has not been used by the House on any of its Legislative proceedings. Clearly, the installation of the new gadget has failed to spur the members to adopt the technology

Order 11 rule 8(c) makes provision for the use of electronic voting in the House. Most bills and motions require a simple majority to decide, however, constitutional alteration at committee of the whole and impeachment require two-thirds majority.

Even for the election of Speaker and Deputy Speaker, Order 1(3i) makes provision for the use of electronic voting, but what we continue to see is the use of the paper option.

The Speaker specifically promised that Nigerians will see how their legislators vote on issues to “ensure transparency and accountability thereby restoring the credibility of the votes taken in the House.”

But several important bills have been passed, several motions have been raised and all have been decided by voice votes.

His promise of equipping the committees with e-voting features has also not been met. None of the halls used for committee hearings have been equipped with the technology as promised.

As a matter of fact, despite the installation of those gadgets, votes, motions, bills and others are still printed on paper for most lawmakers.

The Director of School of Legislative Studies, University of Abuja, Shariff Ghali, said the lawmakers need to adopt technology and move from the ‘archaic’ voice vote.

“Modernisation process envisages the adoption of technology and new changes in bringing development to reality. When electronic voting is introduced, it is actually with the purpose of assuaging and modernising the legislative processes, that is why electronic voting was introduced, just like part of our voting system has been modernised with the card reader.

“If all the necessary requirements have been provided for the legislators to make use of electronic voting through the provision of electronic devices, in supporting or opposing a motion, where everyone can see the results on the screen to avoid partiality, I think the legislators have no reason not to comply with modernisation, as against staying with the primitive or the traditional way or ‘aye’ and ‘nay’,” the don said.

“There are so many things that we can do with that particular E-Parliament system that we have installed. Are we maximising it at the moment? Not yet. We are getting there. One of them is the e-voting that you mentioned, the technologists are working on it.

“We want it to be very efficient before making use of it. Vote capturing is very important. We don’t want errors while using it. I am sure that when we are back from our vacation, the technologists will have finished work on it.”

The implication of E-voting on quorum

The question of quorum in the two chambers has been very controversial with different interpretations of the law.

The quorum of the House is one-third of the entire members of the House as stated in Section 54(1) of the 1999 constitution.

According to the constitution, a minimum of 120 members is needed to conduct the legislative business in the green chamber. Unfortunately, this provision is seldom adhered to.

On March 12, both chambers had to suspend legislative activities due to the inability to form a quorum. However, often, less than 120 members sit for legislative business. Records of votes will expose the House. At the moment, the register of attendance is being treated as a top secret.

Despite the attempt to interpret the quorum as the number of signatures on the attendance list, Order 4 Rule 2 says “if the question of quorum is raised, the Speaker shall count the House and if quorum is not then constituted, shall adjourn the House forthwith.”

In 2019, Haruna Dederi, a member of the House had raised it that the quorum of the House was not formed. The Minority Leader, Ndudi Elumelu, had attempted to defend the lack of quorum thus, “some members have come and signed in the chamber and left for committee assignments and oversight.”

He was ruled out of order by the Speaker. Mr Gbajabiamila, who said at the time, “If the intention was that people should come and go, then, we are kidding ourselves. We cannot be conducting sitting with 10 members. Hon Elumelu, you are ruled out of order.”

The Speaker then called for a motion to suspend relevant rules of the House to allow debate to continue.

However, a quorum is not a standing rule matter, but a constitutional matter.

Section 54 of the Nigerian Constitution established quorum. The House can only suspend its rules, not the constitution.

E-voting has the potential to expose the number of persons voting on legislation, particularly at the committee of the whole. Nigerians could get to see that very few lawmakers, against the constitutional requirement, are making decisions on bills and motions.