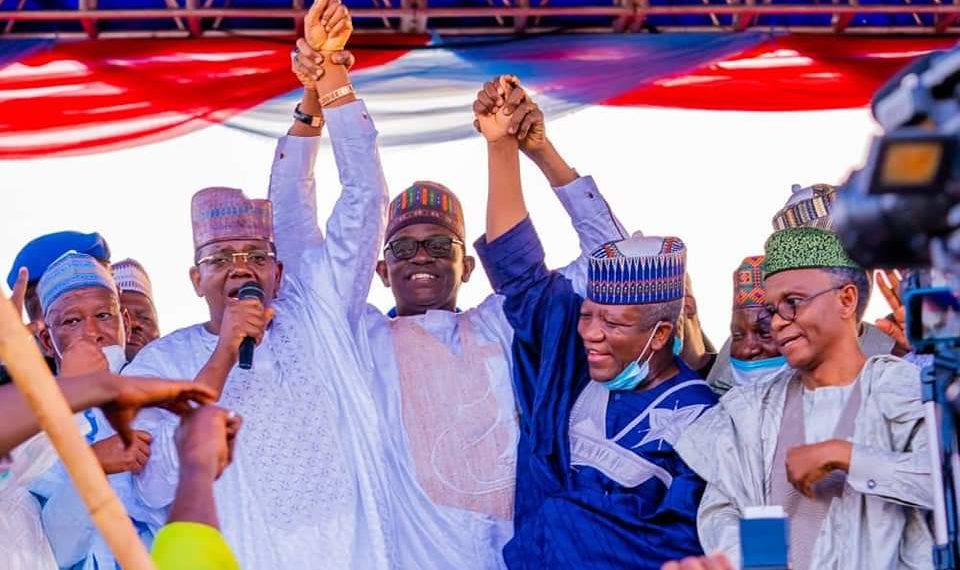 Zamfara State Governor, Bello Matawalle welcomed into the party by some APC governors

With Mr Matawalle's defection to the APC, it appears that the old adversaries in the crisis-ridden Zamfara chapter of the party have now found a common enemy.

Governor Bello Matawalle of Zamfara State has formally taken membership of the All Progressives Congress (APC), ending months of speculation and denial that he was set on defecting from the Peoples Democratic Party (PDP). But events immediately after the ceremony indicate that his defection has added another crack to the wall of the crisis-ridden Zamfara chapter of the party.

Mr Matawalle announced his defection late Tuesday evening at the Gusau Trade Fair Complex at an event attended by 10 APC governors, ministers and the Secretary to the Government of the Federation, Boss Mustapha.

His walk to the APC was long, the speculations heightened by his snubbing of PDP governor’s meetings but hosting APC governors and the Attorney-General and Minister of Justice, Abubakar Malami, at Government House in Gusau.

The governor took with him into the APC all but one member of the state House of Assembly, all senators and six of the seven members of House of Representatives from the state. Kabiru Yahaya, representing Talata Mafara/Anka federal constituency, is the only state lawmaker who did not leave the PDP.

The state’s deputy governor, Mahdi Aliyu, also did not join the APC, saying his father brought the party to Zamfara and the family had never belonged to any other party.

The new crisis began at the defection ceremony when the Chairman of the Caretaker Committee of the APC, Mai Mala Buni, who is also the governor of Yobe State, announced the dissolution of the executive council of the party in Zamfara and declared Governor Matawalle as the new leader of the party in the state.

“As of today, Governor Bello Mohammed is the official leader of the party in the state,” Mr Buni said as he announced the dissolution of the state executive of the party.

“From now on, Governor Matawalle is the leader of our great party in Zamfara State. You will await further arrangements for new party structure from him,” Mr Buni said.

After receiving the party’s flag, Mr Matawalle called on all members of the party to rally around him to build a “new APC of the people’s desire in the state.”

But the following day on Wednesday, former governor Abdul’aziz Yari and a former senator, Kabiru Marafa, said Mr Buni’s pronouncement of Mr Matawalle as APC leader in the state was not part of the agreement reached before his defection. They said his declaration as their leader in the APC cannot stand.

Messrs Yari and Marafa stated this to reporters in Kaduna State on Wednesday after a meeting with the Governor of Kaduna State, Nasir El-Rufai.

Mr Marafa said “one thing that we didn’t accept is the statement from Mr Buni that Matawalle is the APC leader in Zamfara because that was not part of the agreement reached with the APC governors.”

The former senator said pronouncing the governor as APC leader in Zamfara is dubious and unacceptable, revealing that it took the intervention of APC governors, through Governor El-Rufai, for Mr Yari to attend the defection ceremony. He said they were told that the event was meant to end every dispute.

“We were only pleaded with by the APC to allow for the defection ceremony in Gusau to hold, for us to become one. Afterwards, there would be further meetings and negotiations. But for someone from Abuja to say he dissolved the APC executives in Zamfara, that cannot happen,” the former lawmaker said.

Ironically, the events that culminated in Mr Matawalle inheriting the APC victory at the poll were based on the intractable dispute between then-Governor Yari and then senator Marafa. When the faction led by Mr Yari conducted primaries for the nomination of the party’s candidates for the 1999 general elections, the faction of Mr Yari went to court to challenge the process.

The court eventually decided that the process was invalid. Although APC later presented candidates after the Court of Appeal offered it a brief reprieve, the Supreme Court eventually dashed the party’s hope by declaring its participation in the elections as invalid.

With Mr Matawalle’s defection, it appears that the old adversaries have now found a common enemy. This is surprising, given that Mr Marafa had been speculated to be working behind the scene with Governor Matawalle.

At the Wednesday meeting with Messrs Yari and Marafa, the Kaduna governor said part of the agreement before the defection ceremony was that a date would be fixed for an elaborate meeting of all groups in the party in Zamfara to resolve issues.

In what appears a dig at Governor Buni, Mr El-Rufai said a political party is not an object that an individual would have total control over, but an institution run by convincing people.

Some APC members who were not happy with Mr Matawalle’s defection had urged Mr Yari not to attend the ceremony, but the APC governors prevailed on him to attend and he did, Mr El-Rufai said.

“We’re going to meet either here in Kaduna or in Abuja to continue with the discussion before the congresses. The discussion will be on how to resolve the issues amicably without any group being cheated,” the Kaduna governor said.

Zamfara APC is not new to internal crisis. The rift between Messrs Mafara and Yari, as earlier recalled, cost APC all elected positions in the 2019 general elections after it swept the polls. However, both men later reconciled in February.

Mr Matawalle was declared governor on May 24, 2019, after the Supreme Court disqualified all the APC candidates over the failure of the APC to conduct valid primaries.

The apex court further ordered the Independent National Electoral Commission to cancel the votes secured by the APC in all the elections and decide the new winners from the remaining valid votes.

APC had won the presidential, governorship and all the federal and state legislative seats, beating PDP candidates to a distant second position.

Ataga and the woman in the mirror, By Azu Ishiekwene