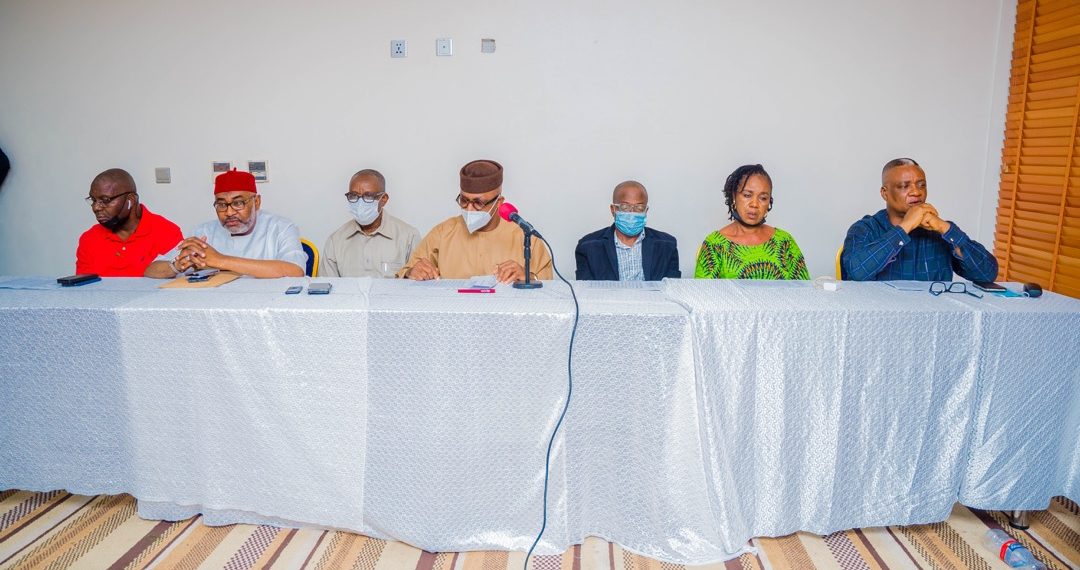 Minister Ngige and 11 aspirants had complained about the APC primary, saying the election did not hold.

A former Senator, Andy Uba, has been declared winner of the Anambra governorship primary of the All Progressives Congress held Saturday.

Despite controversy surrounding the primary, officials said Mr Uba defeated 13 other aspirants to emerge the party’s governorship candidate in the coming November 6 election.

The chairman of the APC primary election panel and governor of Ogun State, Dapo Abiodun, announced the outcome of the poll at Golden Tulip Hotel, Agulu Lake, Awka, early on Sunday.

The full results as announced by the election committee for each of the candidates are:

The election committee adopted the open ballot mode also known as Option A4 to conduct the primary election.

The Minister of Labour and Employment, Chris Ngige, had on Saturday night called for the postponement of the primary “to enable party members across the state to participate as well as give enough room to the Committee Members to resolve contentious issues raised by aspirants.”

A statement by Mr Ngige had claimed that as of 4.25pm on Saturday, there was no sign of any primary going on at his native Alor, which has two electoral wards.

“My inquiries and investigation show that the story is the same all around the 326 wards of the 21 local government areas in the state,” Mr Ngige said.

“As a result, most party members have left for home, having waited since 8am. I discussed with your member, Distinguished Senator Ken Nnamani and I’ll advise you call the Panel Members to shift the exercise to Tuesday, June 29th to also enable you tidy up some issues raised by aspirants.”

Also, 11 of the 14 governorship aspirants of the party had also on Saturday said the governorship primary did not hold.

George Moghalu, the spokesperson for the aspirants, made the position of the group known in a press conference in Awka the Anambra State capital.

Mr Moghalu said in all the 326 electoral wards of the state, people came out to vote, but that none of the APC team saddled with the responsibility to conduct the primary and the Independent National Electoral Commission (INEC) officials were seen.

Mr Moghalu, the managing director of National Inland Waterways Authority (NIWA) and one of the aspirants, said anybody who claimed that there was primary is fraudulent and did not wish APC well in the November 6 election.

Two other aspirants, Paul Orajiaka and Edozie Madu corroborated the position of Mr Moghalu and warned that the era when one man would come up with fake figure to claim victory was over.

The aspirants, however, appealed to the party’s leadership to come up with a fresh date for the primary to ensure that the party beat the deadline set by the Electoral Act.

With the announcement by Mr Abiodun, it meant the complaints were all ignored.