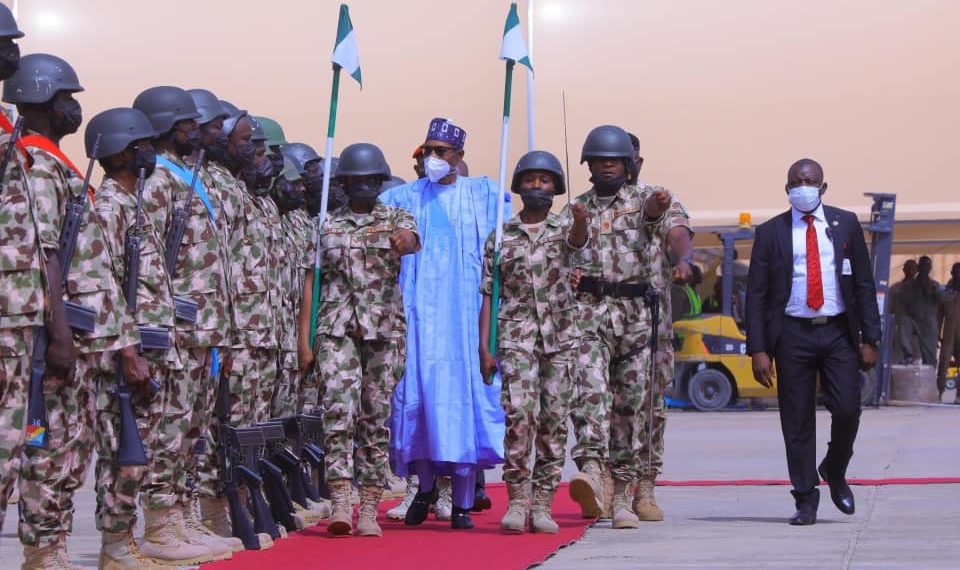 Buhari says: "Culturally I'm such a contradiction because my mother is partly Hausa and Kanuri. My father is hundred per cent Fulani. So I keep on fighting everybody"

President Muhammadu Buhari on Thursday clarified his birth lineage as he revealed that though he is a Fulani, his mother is partly of Kanuri of Borno background.

Mr Buhari made this revelation at the palace of the Shehu of Borno during his just concluded one-day presidential visit to the state.

The president, who arrived Maiduguri in the morning, commissioned seven projects, including tertiary education facilities and health clinics.

He was expected to make a remark after Governor Babagana Zulum and the Shehu of Borno had delivered their speeches.

But instead of responding to the issues and demands raised by his host, the president chose to go down the memory lane to retrace his ancestry and journey in public life.

“My coming to this palace is so important to me; partly because it reminds me of my own background from my mother’s side,” he said.

“Culturally I’m such a contradiction because my mother is partly Hausa and Kanuri. My father is hundred per cent Fulani. So I keep on fighting everybody.

“Coming to this palace has a lot of importance to me. My first political appointment in uniform started from here, as a military governor, I think only for seven months. And when the head of state, General Murtala, was assassinated, I had to go back and served under General Obasanjo as minister of petroleum.

“So I think I have been in trouble for a very long time as a governor, minister of petroleum, head of state, detention, contested three times for president; and went to the Supreme Court three times.

“In the fourth time, I said God dey, and God dey, I won the election. The biggest impression was on my second stand for the presidency. I went to every state in this country. And the people who stood out to see me across this country are more than what anybody can buy or force.

“So this is what I saw with my eyes; nobody told me. So my commitment to serve Nigerians is just to pay back with the love Nigerians showed to me. And starting my political adventure from here, I always look forward to come to Borno.

“I am very pleased that Borno State has been endowed with a very active governor. All you need is to try and befriend whoever is selling newspapers in your quarters, and see how the Nigerian press is appreciating him.

“He is always on the move. I have on many occasions had the cause to personally warn him that please don’t over expose your self . He is a young man and the way he moves around – including visiting the very dangerous areas where the bandits are, very few Nigerians at any level expose themselves to such dangers . May God protect all of us. I thank Your Royal Highness for the words of praise on me.”

Earlier the Shehu of Borno who took time to eulogise the president for his love and concern for Borno, seized the opportunity to beg the President to assist the state in the return of IDPs from northern Borno, to their recovered communities.

“It is not out of place to for me to use this opportunity to make special appeal to Your Excellency to ensure the return of all displaced persons in northern Borno; particularly Abadan, Mallam Fatori, Gudumbali, Gashigar, Foguwa, Tumbu (Small Islands) along the Lake Chad shores which are the bedrock of Borno’s source of economy and agricultural production,” the Shehu begged.

The monarch argued that the return of the IDPs to their homes where they could resume their agricultural activities was in sync with the president’s policy and commitment “towards promoting food security and agriculture.

“I am sure with your support and commitment our our governor, we hope positive steps would be initiated soonest towards the return of these communities to their respective homes.”

President Buhari did not respond to the Shehu’s plea as he took to the memory lane.