Inside Story: How gunmen attacked Igangan, killed many

Lateef Adeniyi was sleeping in his room late on Saturday night, June 5, when he heard the sound of gunshots.

As the head of the Vigilante Group in Igangan community, he hurriedly stood from his bed and fetched his gun.

His family members wished him well as he stepped out of the house.

It was the last time they saw him.

“My husband went out, as usual, to protect the community from external attack when the Fulani’s invaded Igangan late Saturday night. By Sunday morning, we woke up to receive his remains,” Fatima Adeniyi, wife of the deceased, told our correspondent.

The immediate elder brother of the deceased, Waheed Adeniyi, said: “my sibling spent his life defending the community from attack. He died because he didn’t have enough bullets to defend himself when the invaders came on Saturday night.

“He was shot repeatedly before he was later hacked to death by Fulani herdsmen. I was called by community leaders on Sunday morning to receive his remains.”

Mr Adeniyi’s first child, Nureni, urged the government and other well-meaning Nigerians to support him and his siblings in order not to allow their father to die in vain.

Residents who survived the attack told PREMIUM TIMES the assailants were Fulani herders, believed to be carrying out a reprisal.

This newspaper reported how Fulani families and their leader, Abdulkadir Salihu, were forcefully evicted from the town in January by a mob led by a self-styled warlord, Sunday Adeyemo, popularly known as Sunday Igboho.

Mr Salihu, the Sarkin Fulani, was accused of masterminding Fulani attacks such as rape, murder, destruction of farms, and abductions in Igangan.

Although Mr Salihu denied the allegations, that didn’t save him from being ejected from a community he had lived in for decades.

The federal and Oyo State governments frowned at the development, saying no citizen has the right to evict other citizens from wherever they wished to reside in the country.

A resident and youth leader in the community, Oladiran Oladokun, told PREMIUM TIMES that a son of Mr Salihu, Umar, had repeatedly sent him messages threatening that the Fulani would retaliate for how they were attacked and forced out of Igangan. 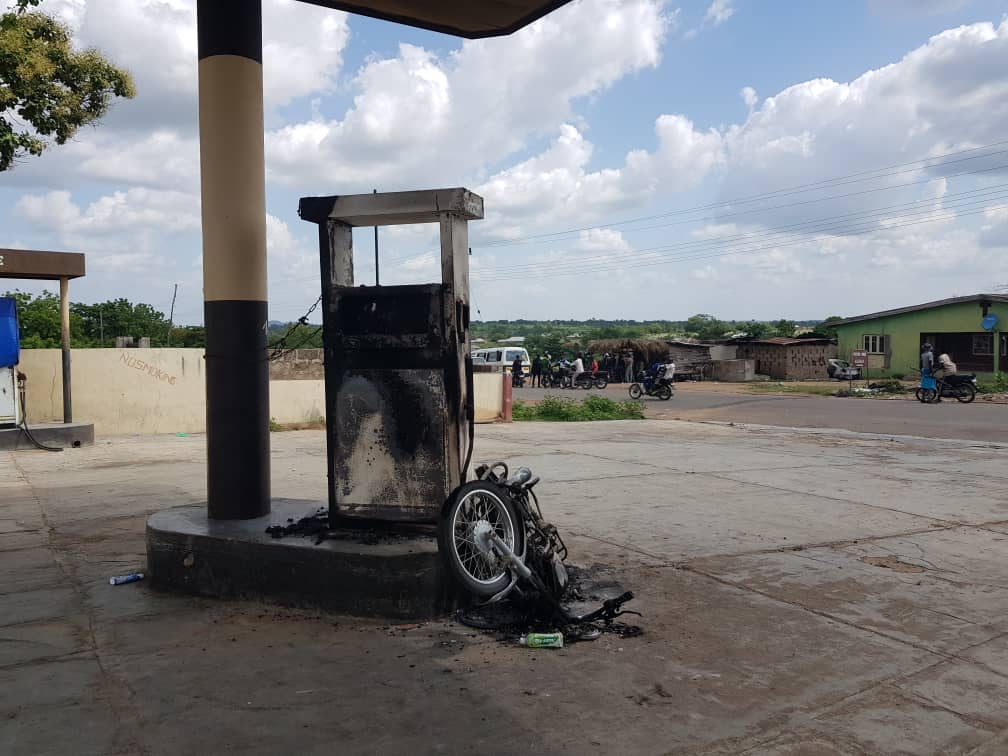 Many residents also told PREMIUM TIMES on Monday that Mr Salihu’s son was seen among those who attacked the community last weekend. Our correspondent could not independently verify this claim.

Mr Salihu did not also respond to PREMIUM TIMES calls and text messages asking if he had knowledge about the weekend incident.

While the police said 11 people died in the attack, residents told our correspondent that over 20 people were killed.

Our correspondent visited Igangan last Monday to capture the sorrowful tales of the attack. This newspaper also met with families of some persons who died in the attack.

PREMIUM TIMES also visited some of their burial grounds.

Findings revealed that most of the people killed were either vigilante group members or Oodua Peoples Congress (OPC) who went out to defend the community after hearing gunshots.

Jimoh Ogunlana, a school security guard, was said to be sleeping in the veranda of his house when he heard gunshots and observed looting of some nearby shops.

“He tried confronting them but all he got in response was a gunshot to his chest. He ran immediately for survival but he was caught halfway and hacked to death,” Oyebisi Bowonle, a cousin of the deceased, said.

Mr Ogunlana’s daughter, Nafisat, told PREMIUM TIMES that “her father was not a troublemaker. He only attempted to save the shops that were being attacked by Fulani when he was killed.”

Bashiru Makinde, an senior citizen in the community, told PREMIUM TIMES that he lost two individuals who were very close to him in the ‘reprisal attack.’

“After hearing a series of gunshots repeatedly, we observed flame in different places and at that point, we became scared knowing fully well that some houses were being burnt.

“We heard people wailing and the Fulani guys were shooting sporadically. My sister, Rabi Raji was scared because she was not sure of her son’s whereabouts. Immediately she stepped out of the house to look for her gun, she was hit by a stray bullet and that ended her journey on earth.”

Mr Makinde told this newspaper that he also lost the son of a family friend called Ibrahim Adeagbo to the attack.

He said Mr Adeagbo was a member of the Amotekun Corps in the community. He joined his other colleagues to combat the invaders but died in the process.

“Ibrahim Adeagbo was hacked on his head and his stomach,” Mr Makinde said.

Another resident, Wale Ayoola, also told PREMIUM TIMES that he lost his father to the attack. The deceased was shot repeatedly and also hacked.

Mr Ayoola said his father attempted to run for survival but the attackers overpowered him. He said he found his father’s body parts scattered at different locations. He picked them up and buried him on Sunday morning

Residents told PREMIUM TIMES that the late arrival of the police made the community record a high number of casualties. The state police spokesperson, Adewale Osifeso, did not respond to inquiries when our correspondent tried to confront him with this.

He did not respond to calls and text messages sent to him on the topic.

PREMIUM TIMES also visited the palace of the monarch set ablaze by the attackers. The Asigangan of Igangan land, Lasisi Adeoye, was moved to tears when our correspondent asked him questions about the incident.

He directed this newspaper to his wife, Sinat Adeoye, who explained that “they (Fulanis) targeted the palace because they claimed Sunday Igboho and boys razed Sarkin Fulani palace earlier this year. They stole people’s belongings and burnt different shops and houses during the raid.

“Some of the shop owners that were affected are now in the hospital because they are already in debt. They killed no fewer than eight vigilantes who tried to confront them during the attack. 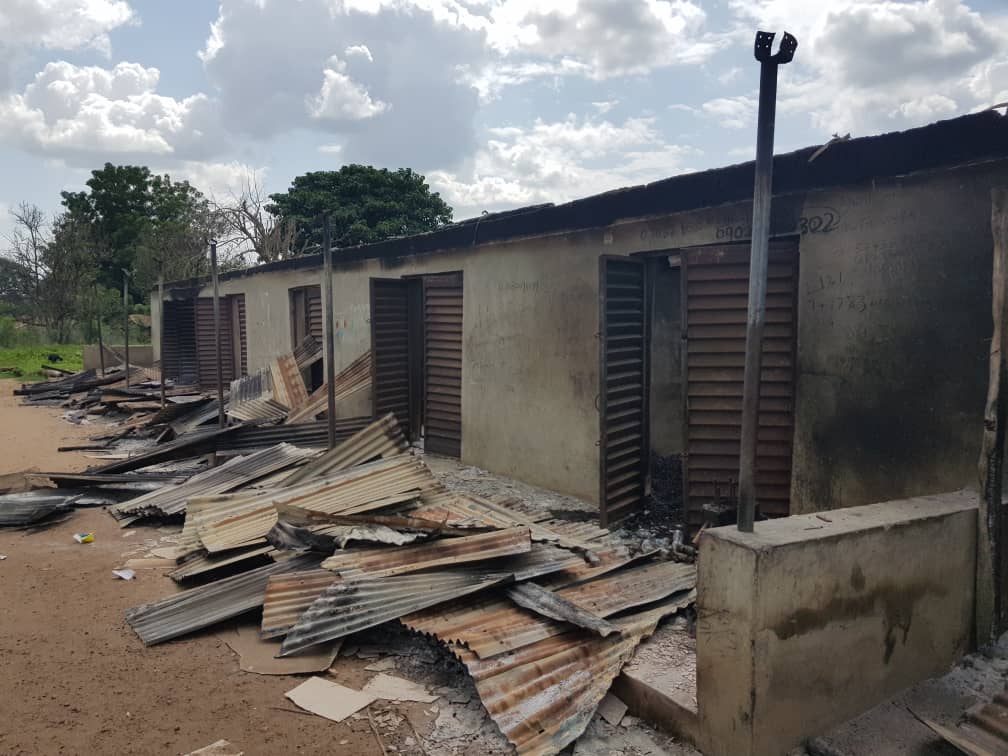 “Two of my brothers who were vigilante members were among those that died in the incident. Some of our people confirmed that they saw Sarkin Fulani’s son among those who came to attack us in the midnight

“But the truth was that we never evicted these people if not for the criminalities they were perpetrating. They were kidnapping our people and asking for ransom not affordable. We need the government to help us. We are dying.”

Also speaking, Kamarudeen Omoloye, the spokesperson of the monarch, told PREMIUM TIMES that upon their arrival, the attackers “dared them to call Sunday Igboho for rescue if they were bold enough. 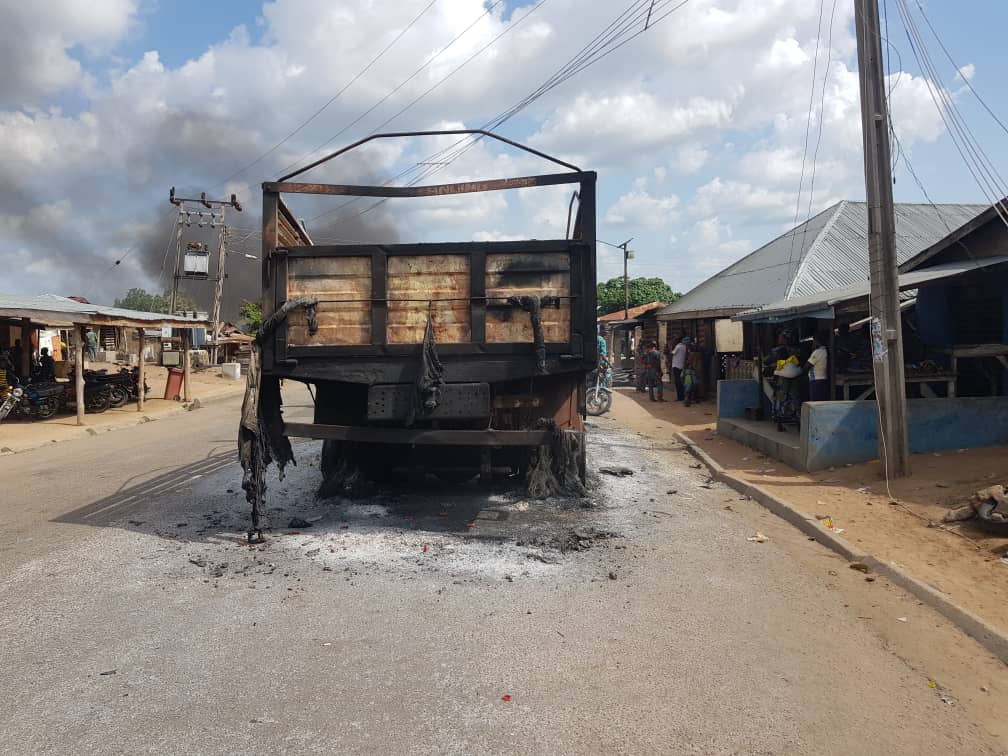 “They carried out the deadly operations for more than four hours but security operatives didn’t come enough. It took the effort of local vigilantes in the community and some OPC members who confronted them to rescue the community from being ruined. 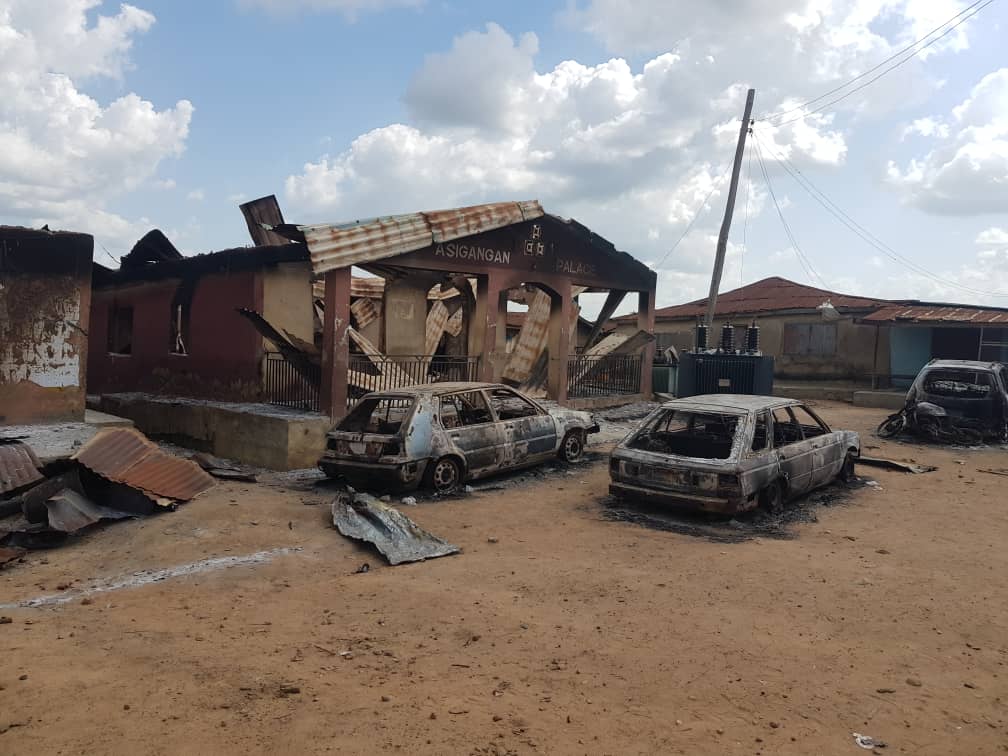 “The police are claiming 11 deaths but truth be told, over 20 people were killed in the midnight attack. We plead with authorities to help us with security operatives who aren’t biased to any tribe so that peace would reign.”

Residents of the community told PREMIUM TIMES that at least six of the attackers were also killed during the attack.

The attack has been condemned by many Nigerians including Yoruba leaders like the Alaafin of Oyo, Lamidi Adeyemi and the Ooni of Ife, Adeyeye Ogunwusi.

Reacting to the killing, the main opposition party in Oyo State, APC, called on Governor Seyi Makinde to convene a security summit promptly to address security challenges in the state.

This was contained in a statement signed by its spokesman, AbdulAzeez Olatunde.

“Obviously and certainly, the current situation of Oyo State was not what Makinde and PDP took over from the immediate past APC government in the state under Governor Abiola Ajimobi in 2019.

“The excuse of general security issues has been with us in Nigeria since 2009 even before Ajimobi took over the mantle of governance in 2011. In spite of the issues, Ajimobi secured Oyo state,” it said.

In response to this, Mr Makinde in a statement by his spokesperson, Taiwo Adisa, accused APC of attempting to politicise the killings in Igangan.

“We all know the state of security of Nigeria when the APC took over in 2015. We knew that the much-talked-about insurgency was restricted to three states of the North East, while kidnapping was wiped out from the South East.

“Even though the leadership of APC complained loudest against the government of President Goodluck Jonathan at the time, the situation Nigeria found itself under President Buhari’s APC is nothing comparable to the sanity we all enjoyed under Jonathan.

“It is obvious the APC was merely in a power grab mission, without a clue of what is needed to fix Nigeria.

“As we speak, insecurity has been weaponized and decentralised, while all parts of the country have become endangered. Even the President’s own state of Katsina is not spared as the sad incidents of kidnapping and killings continue to happen even during his official visits to the state.

“If the APC leaders want to be patriotic, they will call on the leader of their party, President Buhari, to wake up and stop the unwarranted killings across the land: the kidnapping of school children and other innocent Nigerians and fix the economy,” Mr Makinde’s spokesperson said.

The governors of the six South-west states of Nigeria condemned the killings in Igangan community and also said a joint security meeting will be held to review the security situation in the South-west.

“It is horrendous, callous, and highly provocative. All well-meaning Nigerians must condemn, in the strongest term possible, this latest assault on decency and communal harmony,” Governor Rotimi Akeredolu of Ondo State said on behalf of his colleagues.

“While we will encourage the security agencies to get to the root of this latest act of provocation, we have directed the Commanders of the South West Security Network, Amotekun, to convene a joint security meeting of all Commanders in the South West with a view to commencing joint operations in the region immediately.”

He said “certain elements are bent on causing friction among the peoples of this country with the sole aim of achieving a pernicious end. They will stop at nothing until their set goal is realized. It is, therefore, incumbent on all lovers of peace and freedom to rise against this current regression into savagery.

“We on our part are resolved to defend our people, their property, and all legitimate means of livelihood against both internal and external aggression. On this, there will be no compromise. We call on our people to remain vigilant and report any suspicious movement in their communities. In addition, they must be united in the task of defending our lives and properties. We cannot afford to fail,” he said.