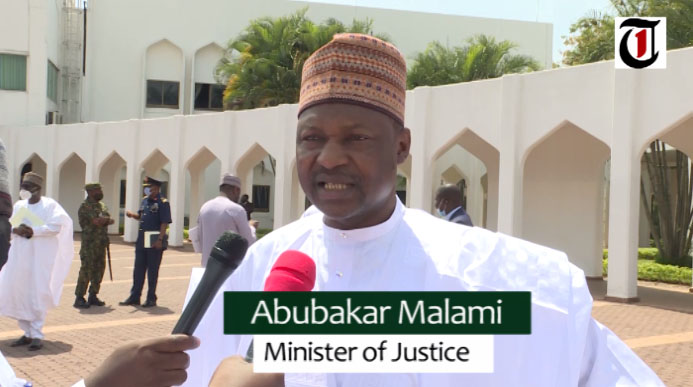 Attorney General of the Federation and Minister of Justice, Abubakar Malami.

Nigerian govt doubles down on #TwitterBan, as Malami orders prosecution of alleged violators

This comes as an expression of the resolve of the government to enforce the widely condemned ban on Twitter, which is seen locally and globally as an attack on freedom of expression.

Despite the widespread condemnation of the Nigerian government’s ban on Twitter operations in the country, the Attorney-General of the Federation and Minister of Justice, Abubakar Malami, on Saturday, issued an order for its enforcement.

The minister, in a statement by his spokesperson, Umar Gwandu, ordered the prosecution of “violators” of the suspension of the operations of Twitter in Nigeria.

This comes as an expression of the resolve of the government to clampdown on those bypassing the Twitter ban. The ban has attracted global and local condemnation as an attack on Nigerians’ civic rights, including rights to freedom of expression.

The government through the information minister, Lai Mohammed, announced an “indefinite suspension” of Twitter operation in Nigeria on Friday.

This came two days after Twitter took down a controversial tweet by President Muhammadu Buhari which the microblogging site said violated its rules and many Nigerian viewed as a veiled threat of violence against the Igbo ethnic group.

But since the ban on Twitter, many Nigerians have been using various Virtual Private Network (VPN) applications to remain active on the microblogging site.

Reacting to the development in a statement by his spokesperson, Umar Gwandu, on Saturday, Mr Malami ordered the Director of Public Prosecution of the Federation (DPPF), Umar Muhammed, to begin the prosecution of those bypassing the ban.

He directed the DPPF to liaise with the Ministry of Communication and Digital Economy, National Communication Commission (NCC) and other relevant government agencies to ensure the speedy prosecution of the “offenders without any further delay”.

The statement reads, “Attorney General of the Federation and Minister of Justice, Abubakar Malami, SAN has directed for immediate prosecution of offenders of the Federal Government ban on Twitter operations in Nigeria.

“Malami directed the DPPF to liase with the Ministry of Communication and Digital Economy, National Communication Communication (NCC) and other relevant government agencies to ensure the speedy prosecution of offenders without any further delay.”

Before now, the Nigerian government has been struggling to impose regime of regulations of the social media space which has proved to be an effective platform for Nigerians to hold their leaders accountable.

In Friday’s announcement of the ban on Twitter, the government directed the Nigerian Broadcasting Corporation to begin the licensing of Over The Top (OTT) and social media applications.

The ban on Twitter and the move by the government to restrict Nigerians’ access to social media bring back the memory of Mr Buhari’s dictatorial regime as the head of state between 1984 and 1984 which saw widespread clampdown on the media and violation of the rights of citizens.